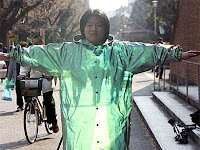 Can you see me now?

The local university has a number of facilities scattered throughout the region. One of those installations is in my neighborhood and I drive past it every day that I commute to work. For a couple of years now I have been irritated by the sign in front of the building. It's an upright slab of concrete—a latter-day stele—that displays the university logo and the street address. My irritation was occasioned by the university's indifferent maintenance. A dark mold-like stain had been permitted to accumulate across the upper edge of the sign, obscuring part of the address. I'd wrinkle my nose at it in distaste every time I passed by, tempted to fetch a bucket and brush and give the sign a good scrubbing. But I never did.

Recently, however, I strolled past the sign on foot. The university facility sits between my home and the auto shop where I take my car for maintenance. I often walk home instead of sitting around in the waiting room (I could use the exercise anyway). Although I was not carrying a bucket and brush, I could not resist the temptation to saunter across the lawn to inspect the sign at close quarters. What was that mess that disfigured it?

The sign is tall, but so am I. With a bit of a stretch, I could reach up and run my fingers across the upper edge of the sign's face. The stain no longer looked like dark mold. It looked as though a lawnmower or edger had sprayed the front of the sign with a finely chopped mixture of grass and dirt, a kind of organic gouache, crudely applied. It seemed unlikely that any mower or edger would throw its ejecta quite that high, but whatever it was, that's what it looked like.

The crusty material came away easily when I brushed my fingers across it. I rubbed a little harder and more rained down in a powdery shower. I was in an awkward position, stretching up to reach it, so I simplified my task by climbing up on the ledge of the sign's plinth. Now I could reach all of the obscured portion of the sign and industriously rubbed the dark crust away. The lettering of the facility's street address was far from pristine (oh, for a bucket and brush!), but the surface was no longer obscured and the address was easier to see.

It took only a few minutes, but I was in no particular rush. Cars drove past on the adjacent road and people walked down the sidewalk leading to the facility's front door, but no one gave me a second look. I was artfully disguised and thus invisible to all passers-by. People looked right through me. It was quite amusing. Since school was no longer in session and summer vacation had started, I was not wearing a tie (which, I admit, I usually wear during the school year as a badge of power and authority—tremble before me, students!). In fact, I was wearing overalls, which rendered me as transparent as any maintenance worker you'd ever care to see. Or not see.

I finished my task unmolested, my fingertips rendered dusty but otherwise undamaged. The sign had been freed of its squamous disfigurement. I completed my walk home. Now, when I drive past the sign, I smile. Vigilante maintenance has struck again!

I must try to control these bizarre impulses.
Posted by Zeno at 5:00 PM

I'm a big fan of vigilante maintenance. At the dog park I frequent, I'm gradually clearing the entryway of broken glass, one handful per day.

Is there a "before" picture of your university sign available on Google Maps street view?

As a matter of fact, Mark, there is. Now we eagerly anticipate the future update to the "after" version.

Didn't you mean you were wearing "alvarozes"?

Maybe you were just mistaken by the local Anglos for a Portugee janitor in your alvarozes, who would by definition be invisible to them.