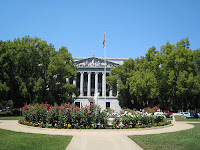 It has been more than a quarter-century since I screwed my courage to the sticking point and resigned my sweet and secure civil-service position for a temporary academic appointment. Several people commented at the time that it was a “gutsy move,” and I admit that it certainly felt like one at the time. Fortunately for me, the temporary appointment eventually turned into a tenure-track position, leaving me to live happily ever after (mostly) as a full-time math professor.

My memories of this event were tickled recently while delving into the stacks of detritus that decorate my college office. The semester is over, grades have been filed, and no summer school assignment looms over me. Nevertheless, I have been on campus several days in a row because of a writers' colloquium being conducted by colleagues in the English department. During free intervals I have repaired to my office and sifted through the piles of papers and books, slowly sorting them into stacks destined to be filed, recycled, or shelved. This morning I stumbled across the job announcement that was issued when my state agency was seeking my replacement. It gave me a good chuckle.

The job announcement was drafted by the agency's executive secretary, the semi-competent and ill-tempered appointee who was extremely helpful in increasing the diligence of my job search. Until her advent, I had had a lot of job satisfaction in my position. She injected enough poison into the atmosphere to help me on my way toward the teaching position that I desired. The job announcement was a perfect illustration of the boss's myopia. She created it by simply listing every function I had accumulated in my years at the agency. In effect, she was advertising for someone who was my clone (although preferably without my subversive attitudes and tendencies toward insubordination).

Here are excerpts from that job announcement, shorn of the standard civil service boilerplate and thus reduced to the essentials of the position's duties. It brings a smile to my face when I peruse it:


Description: The Commission has a small, highly specialized staff whose basic missions are (1) to monitor the status of California's General Fund revenues, expenditures, and reserves; (2) to track the collection of federal taxes and receipt of federal expenditures by California and its counties; and (3) to issue regular reports concerning the State's short- and long-term fiscal situation and the impact of federal taxation and spending on the State for use by the Legislature, the Administration, and other interested parties.
The duties of this position are as follows: (1) providing technical advice and support to enhance the Commission's use of its computer systems; (2) being the lead editor of the Commission's publications and being principally responsible for preparing those publications for photo-reproduction; and (3) heading the Commission's legislative tracking system (including the preparation of articles for inclusion in Commission publications on the status of significant pending financial legislation).

Desirable Qualifications:This position provides an excellent opportunity to demonstrate, expand, and apply expertise in the use of computer hardware and software. The position also showcases adroit writing skills, as well as providing the opportunity to identify, research, and describe key issues under consideration by the Legislature. Accordingly, the individual who fills it should:


Therefore, the ideal candidate would be a computer tech support person for multiple platforms who would also be the in-house editor and compositor of  publications (one job or two?), a prolific writer (a third job, or doesn't it count because there'd be much less editing on the employee's own documents?), and a legislative analyst (surely we're up to three by now). 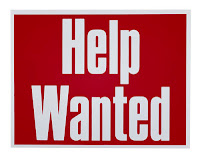 I remember taking the job announcement to a state user group where I knew several members had the necessary computer expertise. Many of my fellow civil servants were unfazed by the necessity of supporting two incompatible computer systems, since many state offices had been infiltrated by personal computers in addition to proprietary networked systems. They nodded their heads when I read the first desideratum. They were less sanguine, however, when I tossed in the part about programming languages and desktop publishing. The writing component made several of them nervous because they knew of my background and did not relish comparisons. However, when I added legislative analysis to the package, groans were heard and questions were asked: “Is this supposed to be one job?” “Who is your boss kidding?” “Is she trying to ensure that the position stays vacant so that she has some salary savings to play around with?”

Of course, in a small state agency where the staff members wear several hats, multiple responsibilities are standard operating procedure. However, these job configurations develop with time and evolve to fit the capabilities of the people who occupy the positions. I certainly had not started mine with the same portfolio with which I ended it. My initial assignment was legislative tracking and analysis, mainly because I had just come over from the legislative staff. While serving in that capacity I acquired a home computer and developed skills that came in handy when PCs began to invade our office. Furthermore, it was during this period that I began to publish magazine articles in computer publications and math journals. This skill set of mine grew as I worked at the state agency and my job description grew with it. No one should expect many other people to stroll in with the exact same experiences and the exact same skill set. That, however, is what my boss was looking for.

The job opening was announced while I was serving out my final weeks on staff. My position remained vacant for a few months after my departure, until someone took a sharp pencil to the job description and made it a little more generic. At one point I met my successor, who was manifestly not doing the same job I had been doing. And neither was the boss, who had been sacked as the head of the agency.

When the day comes to retire as a Math Professor, will the job description for the aspiring successor include novelist, as well as some fluency in Portuguese?

And will the job description include "writer extraordinaire"?