It ain't necessarily so

Everyone keeps waiting for the Supreme Court to unburden itself of its ruling on California's Proposition 8, which banned same-sex marriage in 2008. Trembling with trepidation that their labors will have been for naught, the Catholic clergy and laymen who struggled so hard on Proposition 8's behalf have been sharing their fears via print and broadcast media.

On Sunday, June 16, the San Francisco Chronicle published Joe Garofoli's interview with Salvatore Cordileone, the current archbishop of the San Francisco diocese. According to the article, Cordileone struck an alliance with evangelical Protestants and the Mormon Church to promote Proposition 8, with the archbishop digging up $1.5 million to support the effort. That's a lot of collection baskets! (I'm guessing that most of that money came from sources other than the members of his local congregations. San Francisco is not a happy hunting ground for anti-gay contributions, even among its Catholics.)

The Catholic hierarchy appears to be stuck on the campaign theme that worked so well in the 2008 campaign, which I heard directly from my mother's mouth when she explained why she had to vote for Proposition 8: “It's to protect the children!” This was indeed Cordileone's theme as he pitched his position to the Chronicle reporter:

With piercing blue eyes and a propensity for speaking in complete sentences, Cordileone explains that his view of marriage is based on how he believes it affects children.

Legalizing gay marriage, he said, “would result in the law teaching that children do not need an institution that connects them” to their biological parents and their parents to each other.

“Too many children are being hurt by our culture's strange and increasing inability to appreciate how important it is to bring together mothers and fathers for children in one loving home,” he said.

Let that sink in for a minute. His Excellency the archbishop is arguing that permitting same-sex couples to wed would undermine the connection between children and their parents. Even more than that, it would “teach” children that they really don't need those connections.

Is Cordileone an idiot? Or just a liar? (Can't it be both?) The archbishop is laying down a thick layer of illogical crap, and he does it as smoothly as can be. Allowing same-sex couples to wed says nothing to anyone about the parental needs of children. It would do nothing to prevent opposite-sex couples to wed and instantiate the conventional ideal of the nuclear family. Gay marriage would merely (merely!) extend marriage rights to people who are currently denied them. Wouldn't Cordileone's supposedly pro-kid mission be better accomplished with a campaign to require mothers to marry the fathers of their children? That would connect them up, all right! He might even be able to get the Mormons on board with that, since it would necessitate a return to plural marriage. But it's for the children!

As I mentioned, this “think of the children!” blather appears to be the Church's official line on the horrors of same-sex marriage. On Monday, June 17, Immaculate Heart Radio broadcast an installment of “The Bishop's Radio Hour”, during which host Bob Dunning interviewed William B. May, the president of Catholics for the Common Good. Bill May was relentless in the repetition of his mantra, which decried the possible “elimination of the only institution that unites kids with moms and dads.” Yes, he really said this. Elimination! 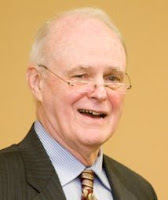 On the marriage issue, we have to start asking people that question. Okay, you're for redefining marriage. That eliminates the only institution that unites kids with their moms and dads. How can you justify that? If you're proposing to do that you need to address that problem. How are we going to promote men and women marrying before having children if it becomes illegal to do so?

Illegal! This short excerpt cannot do justice to May's mindless repetition of his “elimination” claim. In a short ten-minute block of time, he repeated the absurdity five or six times (I can't be sure because the on-line archive clipped the final minute of the interview). Interviewer Bob Dunning, who is a legitimate newsman and reporter for all that he views the world through Vatican-tinted glasses, embarrassingly mumbled agreement with his guest throughout the entire segment. However, at one point Dunning offered an extremely pertinent observation that May had carefully avoided mentioning:


May: The voters of California have spoken clearly on this twice. There's no doubt where they stand.

Dunning: It tends to be an age demographic; that's what we're fighting.

Bob has it right. Time is not on your side, Bill. In 2000, California voters enacted marriage-defining Proposition 22 with the support of 61.4% of those casting ballots. In 2008, they added the one-man/one-woman definition to the state constitution when 52.5% of the voters supported Proposition 8. A simple straight-line projection shows that the “traditional marriage” gang loses more than one percentage point each year. By this measure, the projection for 2013 is 46.9% in favor of Proposition 8 and similar measures. The reality, however, is even worse for Cordileone and his allies. According to recent a Los Angeles Times poll, same-sex marriage opposition has fallen to 36%. Support has risen to 58%. Suck on that, Your Excellency. 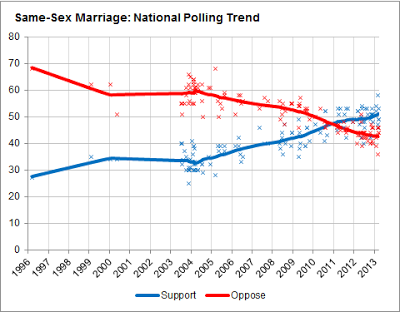 Dunning sees the writing on the wall and is worried that quashing the tide in favor of same-sex marriage is a now-or-never crisis.

The archbishop said, "Legalizing gay marriage [...] 'would result in the law teaching that children do not need an institution that connects them' to their biological parents and their parents to each other."

Well, that sure knocks the Catholic church's advocacy for placing babies up for adoption as an alternative to pregnancy termination into the cocked hat.

Also implied is that same-sex marriage is OK if even one partner is infertile (e.g., post-menopausal women).

I'm an adoptee. If I'd had two fathers or two mothers, and they were even 1/4 as fantastic as my adoptive dad, I'd have been as well raised. (My adoptive mother, dearly though I loved her, suffered from extreme anxiety through most of her adult life and it made her hard to live with.) And I had Catholic biological parents, who gave me up for adoption at birth because they were good Catholics who didn't use birth control, they were poor, and couldn't afford another mouth to feed. I was adopted at birth through a Catholic adoption agency.

While I'm glad to be here, and figure I lucked out in terms of adoptive parents overall, the sexual orientation of my parents wouldn't have mattered. But because of my personal experience, my irony meter breaks when the Catholic church comes up with such arguments.

How can professional bachelor have a clue about marriage and raising children? Come on, your Archiness, admit you hate homosexuals so much you'll spend over a million dollars to deny them rights their straight brothers and sisters enjoy.

Progress today. The RCC is on the losing side, and the trend is for more of the same.