My friends and acquaintances are very helpful in keeping my ego in check. They are ever ready to assure me, especially recently, that I am no good at false modesty. As someone who strives to excel in every endeavor he undertakes, it is understandably greatly disappointing that my self-deprecations are so unsuccessful. For some reason, friends and family do not accept my frank admission that I am a dilettante and poseur. It is a puzzlement. I ponder wearily how to remedy the situation, but inspiration fails me. I confess that I do not know what to do. 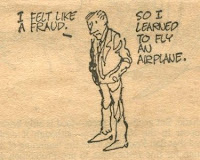 I felt like a fraud.
So I learned to fly an airplane.

When did this all begin? I am not certain. Perhaps the most recent spate of failures began when I told some friends I had stumbled into writing a novel. It was a purgative event, rendering the pent-up demons of old family feuds into a fictional form, exorcising ancient controversies by reducing them to narrative form. Much-told tales had been written down where others could see them and smile. Tragedy had been tamed into a tragi-comic story, which I shared with several friends. 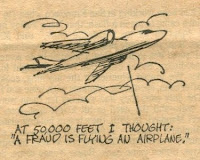 I explained to people that I wasn't “really” a novelist—just someone who had written a novel-length manuscript. After all, I'm just a math teacher and not a littérateur. People scoffed. One particularly sly friend pointed out that using a word like “littérateur” was a dead giveaway. Clearly I fancied myself an author. In response, I confessed that I was an author: an author in the field of expository mathematics, with contributions enshrined in a number of texts and supplements and magazines—and a couple of writing awards to my credit—but not really a fiction writer. 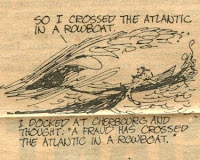 This was deemed evasive. Did I not intend to seek a publisher for my quasi-memoir? I confessed that I was interested in shopping it around. The first readers had been extravagant in their praise (of course, they were friends), raising my expectations and causing me to dare to think the story had commercial prospects. I had even sought an agent. This was, clearly, proof positive that I was now a fiction writer—and my biggest fiction was my pose that I was not. 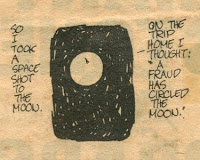 So I took a space shot to the moon.
On the trip home I thought: “A fraud has circled the moon.”

I failed at finding an agent interested in my manuscript, but instead I found a university press that was eager to look at it. Several months passed while their reviewers read it, but eventually my novel was accepted for publication. When I met the professor who was the editor-in-chief, I ever-so-modestly mentioned that it was an extraordinary stroke of good fortune for a non-novelist—a math-teaching non-writer—like me to get his manuscript accepted. The good professor scoffed at my characterization: “You wrote a novel. It's being published. You are, by definition, a novelist. In fact, you should be thinking about future writing projects.”

I had to grin. A professor of foreign languages was lecturing a professor of mathematics about what is true “by definition.” He had me there. 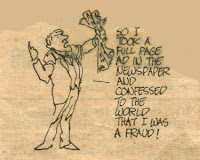 So I took a full page ad in the newspaper and confessed to the world that I was a fraud!

One of my colleagues dimpled when I recounted my recent failures at modesty. “Oh, Zee,” she said. “Don't you know about ‘fishing for compliments’? You're just trying to get people to tell you how wonderful you are.” I would, of course, have denounced this vile calumny, but it seemed to hit pretty close to home. Yes, perhaps I protest just a little too much. If I'm really anxious about being a dilettante in foreign fields of endeavor (and risking embarrassing pratfalls), wouldn't it make more sense to stop drawing attention to it? If only I were a naturally taciturn person— 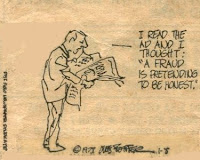 I read the ad and I thought: “A fraud is pretending to be honest.”

During the late seventies, I had a Jules Feiffer cartoon posted in my graduate student office. The “impostor fantasy” amused me greatly, as well as speaking to deep-seated fears. Naturally I was reminded of it and was pleasantly surprised to discover it still resided in my decades-old files. It gave me renewed inspiration:

At least I got to humble you by proofreading your manuscript :-)))

That, Kathie, may require a post in its own right. ;-)

It's a tribute to you equanimity, not to mention the security of your ego, that after what I did to you you're still willing to be on speaking terms with me ;-)))

When I was younger, I knew I was a fraud, and I was sure to be found out at any moment.

As I got older, I came to realize that everyone else was faking it, too. Nobody really knows what they're doing; we all make it up as we go along.

And I guess that's OK. I just wish I'd known it sooner.

"That, Kathie, may require a post in its own right"

Zeno's revenge, eh? I suppose if I were really secure, I'd let you proofread my next manuscript ;-)

William put it more eloquently than I could have. I'm especially feeling like a fraud at the moment, because I'm embarking on a new career and simultaneously trying to set up an Etsy shop to help defray the costs of my compulsive beadmaking hobby. Is my stuff good enough? Are my skills good enough? Am *I* good enough? The voices inside my head say no, but then they've always said that.

What a marvelous cartoon. I try to qualify most things I do with reactionary self-deprecation - not even sure why. I do like your colleague's conclusion!