Learning on the wing

Like a moth to a flame (or an archangel to a young Jewish virgin), I was drawn irresistibly to the opportunity to attend a faculty training event on the existence of angels. When it first came to my attention, I was initially struck by how inappropriate it seemed as a topic for a professional development activity. While not quite as bad as giving nurses continuing education credit for attending a Catholic indoctrination session, the angel seminar simply seemed irrelevant and beside the point. Where was scholarship in this? What useful lessons might I learn?

The presenter was TM, a young woman who holds a doctorate from the California Institute of Integrated Studies. She is an alumna of the CIIS program in Philosophy, Cosmology, and Consciousness, but I suspect “cosmology” in this context has very little to do with what science-types consider to be cosmology. That's just a guess, of course. You can visit the program webpage and consider the course content for yourself.

To give credit where it's due, Dr. TM declared in her opening remarks that she did not expect attendees to change their opinion about the existence (or non-existence) of angels as a result of her 90-minute presentation. That demonstrated TM's connection to reality, recognizing that the material she would present lacked the evidentiary weight necessary to persuade non-believers. Among the two dozen attendees were several who nodded their heads in sad acknowledgment that some people just aren't open-minded enough to embrace the reality of God's messengers. Others, like me, sat still, resisting the impulse to roll our eyes. It was prudent of TM to allow for our skeptical presence. We were, however, very well behaved throughout the event.

TM was much enamored of Carl Jung's notion of synchronicity, a concept I have never been able to take seriously. As TM explained, a synchronicity occurs when a strong interior impulse, condition, or sensation is reinforced by an exterior manifestation that generates a transformative moment of understanding. Jung's own favorite example, according to TM, was the appearance of a beetle at the window during a psychotherapy session with a female patient who was telling him about a dream about a golden Egyptian scarab. Since the beetle at the window was the nearest local analog to Egypt's golden scarab, Jung deemed it a synchronicity—an acausal simultaneity between his patient's inner life and the external world. (J. B. S. Haldane might have preferred to regard it as a manifestation of God's inordinate fondness for beetles, having scattered hundreds of thousands of species of beetle throughout the world.) 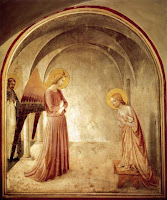 So, where were angels in all of this? As you might suspect, angels are implicated in synchronicities, especially when they manifest as exterior confirmations (i.e., as if they exist in the physical world) of interior emotions or yearnings. The archetypal example is The Annunciation. TM asked the attendees if anyone recognized this special event. I helpfully raised my hand and offered a description: “That's the event reported in the Bible of the archangel Gabriel appearing to Mary and announcing that she was to bear a son who would be the savior.” TM beamed at me and added some details. First of all, the yearning of the Jews for the coming of their messiah would be manifested in the hopes of young Jewish maidens to become the savior's bearer. Second, it didn't matter whether Mary was pregnant or not when Gabriel made his announcement. Either way, Mary would have a deep interior desire or anticipation that was acausally linked with the archangel's appearance.

TM was particularly interested in the parallels between synchronicities and annunciations. The incident with Mary and Gabriel is the most famous, but angels were also reported to have advised Joseph not to divorce Mary and later to flee to Egypt to avoid Herod's slaughter of the innocents. In her dissertation research, TM made the case that annunciations in religious history (by no means limited to Judeo-Christian sources) were anticipations of Jung's theory of synchronicity and fit well into the Jungian model. Furthermore, the parallels remain even if the angels did not actually exist. (Surprise!) That's because it's not strictly required that the coincidental confirmation of the interior sensation be an actual event in the physical world. The angels could, in fact, be confirmatory figments of the imagination.

At this point, I got to learn something—and by this I do not mean that I learned there's a lot of silliness in this field. After all, who should be surprised that there are parallels between supposedly different forms of delusion? No, in this case I learned a bit of Bible lore that I had not heard before, and which I found interesting and intriguing. According to TM, Gabriel does not appear in the earliest Bible texts. His role is magnified by redactors who found fault with Mary's inner conviction that she was indeed fated to become the mother of the messiah. If this is correct, then Mary's synchronicity was a progression from “I want to bear the messiah” to “I will bear the messiah.” That's pretty thin gruel. Having an archangel with a name showing up to put his stamp of approval on Mary's inner yearning makes the story much more satisfying.

A few of us got fidgety near the end of the event as some of the attendees hastened to offer personal examples of synchronicities. My inner yearning for it all to end was confirmed by the external manifestation of a yawn, but I'm afraid it lacked the acausal quality that would have classified it as a synchronicity.
Posted by Zeno at 11:30 PM

Wait. So synchronicities can be imaginary? And still real?

I wonder what organization accredits the California Institute of Integrated Studies...

Oh, and my verification word is "puroplow." Couldn't that signify the purity of the virgin, as well as a plow on the farm where Zeno grew up? Those interpretations are as reasonable as the beetle on the windowsill, right?

Just noticed that "Halfway There" and "synchronicity" both take up 13 spaces. That couldn't possibly be a coincidence, could it? Does it also mean they're both unlucky?

A few years ago, I realized the following AMAZING facts:

1) My birthday is on the 28th, 9 days before my husband's parents' wedding anniversary on the 6th.

2) My husband's birthday is on the 3rd, 6 days before my parents' wedding anniversary on the 9th.

3) Our first son was born on November 24th, on the 125th anniversary of the publication Darwin's Orgin of Species

4) Our second son was born on December 25th, the birthday of Isaac Newton (and also some other ancient famous person)

It means that humans are really good at recognizing patterns, even where there aren't any.