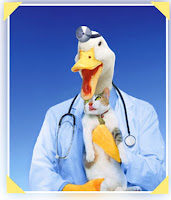 The speed of light allegedly limits the rate of transmission of information. When it comes to bad news in my family, I'm not certain the limit applies. Sometimes I get reports of tragedy before they even occur. It's a gift that my family has.

Mom was on the phone. She had news about my niece's cousin's husband.

“He's married to your sister-in-law's niece.”

“Okay, I guess I could parse that out, Mom, but Phyllis has a whole bunch of nieces on her side of the family and I don't know them, let alone the spouses of the married ones.”

“His name is Kyle and he came down with multiple sclerosis.”

“Well, damn, that's a tough situation for a young man, Mom, but the news really doesn't mean that much to me.”

Mom paused for a few seconds. Had I offended her by my lack of interest in the poor fellow's plight? When she broke her silence, it did not immediately clarify the matter:

“I know you're not going to want to hear this.”

Now it was my turn to be silent. Then the light hit me and I understood. I knew exactly where she was going:

“You're absolutely right, Mom. I don't want to hear it. You can just drop it.”

“Phyllis got Kyle to go to her doctor.”

She went there anyway.

Short of sticking my fingers in my ears and yelling “La-la-la-la,” there was nothing I could do. Mom insisted on telling her story.

“Pat is too a doctor. She's the one who figures out illnesses by looking in your eyes.”

Mom was talking right over me. The woman is relentless.

“She looked at Kyle's eyes and told him he had to stop using artificial sweeteners.”

“Fine, Mom. No harm there. But that's just semi-pointless advice from a new-age practitioner.”

“But Kyle got all better! He stopped drinking sodas with artificial sweeteners and took the medicine Pat prescribed for him and he's all better!”

“Yeah, right. She cured Kyle's MS by getting him off aspartame. Mom, she's not a doctor. And she can't prescribe drugs. It's against the law.”

“Well, she did. She told him to take mega-vitamins and gave him some herbs, too.”

“Vitamins and herbs are uncontrolled supplements, Mom. Anyone can recommend them. Anyone can take them. They're not prescription drugs. She can't prescribe drugs because she's not a doctor. Am I not making myself clear?”

“I knew you would say that, which is why I didn't want to tell you about it.”

“That's what everyone said he had. I don't know if he went to a doctor for a formal diagnosis.”

“You don't know if he went to a real doctor or not? Then it looks like Phyllis's fake doctor gave Kyle fake drugs for a fake cure for his fake disease. And what do you know? It fake worked!”

“You know, Zee, there's just no talking to you when you get like this.”

“Well, Mom, here's some advice for next time: I am always like this! Take some ginkgo biloba so that you remember that your son is not interested in stories of credulous acceptance of quackery. The ginkgo doesn't actually do anything except perhaps induce a placebo effect in the gullible. In your case it should be pretty powerful.”

“Oh, honey, you are so close-minded!”

Half of my genes are from that crazy old lady. Oh, dear.
Posted by Zeno at 7:30 PM

Of course, how those genes are used is at least as important as what they are. From what I have seen of your writing here on this blog, you have no worries.

Are you sure you're not adopted? Or a changeling or summat.

...and from your posts on him, your father doesn't seem to be a whole lot better. Perhaps they're both just heterozygous for lunacy. (See? "Alternative Medicine" types aren't the only ones who can oversimplify and misuse scientific vocabulary!)

As a biometrics guy, I'd be in some trouble if iris patterns changed willy-nilly. They don't.

I'm surprised that people who claim to make their living actually looking at and *photographing* irises haven't noticed this. It's not even that the patterns change but signify nothing. They just don't change unless some really funky stuff is happening to you. How is this idea still alive? It's like going to a fingerprint reader for medical analysis.

I always wonder if these new-age "doctors" really believe in what they do, or if they simply have no ethics whatsoever.

I think that most such "doctors" are goofy true believers (just like their clients). But I'm sure there are conscious scoundrels among them, too.

Zeno, I am glad your family is the way it is. 1. It gives you great stories to tell, and 2. Your family makes my family seem ever so slightly more normal.

Troblesome Frog...One does not go to a figerprint reader you silly person. They go to a palm reader. The finger print does not carry enough information. '^)

The ginkgo doesn't actually do anything except perhaps induce a placebo effect in the gullible. In your case it should be pretty powerful.

Seems the jury's not in on Ginkgo. The MedlinePlus entry says: "Although not definitive, there is promising early evidence favoring the use of ginkgo for memory enhancement in healthy subjects ..."

I used to do some desktop publishing work for a homeopathist years ago when I was young, stupid, and broke, and I kind of got sucked into the World of Woo for a while. Not that I ever believed any of it was anything but crap, but I was sure sunk to the ankles in the stuff unwillingly. I'd say the ratio of True Believers to charlatans is about 10:1.

The fact that the jury's not in on supplements like ginkgo (Nick B., above) prompts me to recount my own tale.

In 1987 I was provisionally diagnosed with the beginnings of osteo-arthritis in my left knee. The doctor was a generalist, so you may read into that whatsoever you wish. I couldn't stand for more than 15 minutes at a time, so teaching class was out of the question. (In the UK one doesn't sit in front of certain classes, unless you want them out-of-control in minutes flat) A visit to the job centre, and an interview with a counsellor to whom I recounted my medical tale. Herd had a similar problem, had told some-one who'd likewise suffered, etc., etc. The potion they'd come up with, which was supposedly efficaceous, was Evening Primrose Oil, widely used by women to suppress PMT. I checked it out, discovered it contained lipids related to compounds found in the synovial fluid in articulating joints, spoke with my doctor who shrugged and said why not, and I started taking it.

If you think ...'What an idiot'... in my defense I would say 1. You didn't experience the knee ". 2. I couldn't face giving up skiing. 3. The cost per month was no more than some spend on beer in an hour. 4. My mother also suffered from O.A. although I'm not sure if it is hereditary.

Thirty years on I'm still an idiot. I take it daily, together now with glucosamine (7 years) which is a proven aid against O.A. I'm 70 and still ski, as the symptoms I experienced disappeared within three months of stating to ingest the stuff. It may have all been a waste of money, but my joints do seem to be much as they were 22 years ago.

The brain's starting to give up a bit, though. Damn it :-) I still have a couple of technical papers half-written. Now should I spend some of my daughter's inheritance on ginkgo?