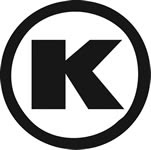 Would you like a splash of bigotry with that?

When I was a bored youngster, tagging along in my mother's wake on shopping trips, I used to pay more attention to the labels in the grocery story. It was the only reading material at hand. At some point, I asked Mom the meaning of the little logo that was discreetly included on many, but not all, of the packages.

“Mom, what's this mean? Is the cereal made from oats grown on the Circle K ranch?”

She looked where I was pointing and quickly smothered a laugh.

“No, honey. That symbol means the food is kosher.”

I was still in the dark. Until that point, I had thought that kosher was a word used only in negation (“That's not kosher!”), such as when you caught your brother cheating at a game. It occupied a very small spot in my vocabulary.

“The kosher symbol tells Jewish people that the food is prepared according to their dietary rules, but I don't know what those rules are. It can be complicated.”

“Sure, sweetheart. Anyone can buy kosher food. In fact, some people like to buy kosher products just because the rules are awfully strict. They figure the food will be better.”

That made sense, because otherwise the store shelves were loaded down with more kosher products than our synagogue-free Central Valley town could support. Most of the “Circle K” stuff was being snatched up by goyim, no question.

For some reason, I didn't ask the logical follow-up. At least, I have no recollection of doing so. I did not ask my mother if any of the labels or symbols indicated that the products were intended for Catholics (or more generic Christians, for that matter). It was probably besides the point anyway. I already knew that Catholics could eat anything they wanted, except for meat on Fridays. Only a silly little boy would have asked such a question.

Oh? Well, guess what! The happy day of Catholic labeling is at hand. No joke!

That is, as best I can tell it's not intended to be a joke. The risible aspects of the scheme, however, are undeniable. Check this out:

The mission of The OVerus Organization is to mark products and services that respect Christian values with The OVerus Emblem, enabling good stewards to choose those consistent with their values.

Can you guess what it takes to “respect Christian values”? (I'll bet you can!) OVerus president Keith Miklas offers some happy-talk about how his company is taking a positive approach. That is, OVerus is in the business of encouraging the purchase of certain items rather than discouraging purchases of certain items.

That's true as far as it goes, but it doesn't go very far. OVerus is really all about boycotting companies that support equal rights (or rites) for gay people or any formulation of reproductive rights that includes abortion. In their own words, 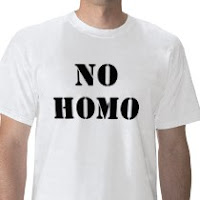 RESPECT FAMILY VALUES. A product or service must respect family values with its community involvement policies and charitable contributions:

I used to think it was just a little bit tacky when some businesses would include a Jesus fish in their advertisements in the Yellow Pages, but OVerus is taking Christianity to entirely new levels of commercial endeavor. Imagine being able to limit your purchases to products from anti-gay and anti-choice companies!

The vision of The OVerus Organization is to offer an OVerus product or service in every category.

The OVerus website dangles the prospect of heaping up earthly treasure before the corporations it hopes to lure into the fold. Miklas uses the power of his college degree in math (yes, I know; this embarrasses me) to run the numbers:

If every Christian in the U.S. switches to OVerus brands, then the OVerus market will equal all $7 Billion. Conservatively, this projection is based on the assumption that one out of five will switch, resulting in an OVerus Retail Coffee Market Value of (0.2)(83) = 17 million people, or (0.2)($7.0) = $1.4 Billion.

It's a compelling prospect, isn't it? (Assuming, of course, that Christians drink coffee at a rate proportional to their numbers within the population.)

Did you perhaps wonder, just for a moment, why Miklas chose coffee for the product in his example? It's not a bad choice, certainly, but one doesn't have to search too far before discovering it's the only logical choice.

That's because a brand of coffee is currently the only OVerus-approved product.

The coffee in question is Esthers Coffee. It's not available in stores, although Miklas has big plans for it.

He should. Miklas is the founder of Esthers Coffee. OVerus is actually a spin-off from the effort to market a “pro-life” brand of coffee. For some odd reason, Esthers Coffee has yet to win the business of one-fifth of Christian coffee-drinkers and the $1.4 billion represented by that market niche. It may have been wakeful coffee-laced nights that brought Miklas to the realization that he needed to play in a larger arena. OVerus is the peculiarly sectarian result.

OVerus. Probably not coming soon to a market near you. 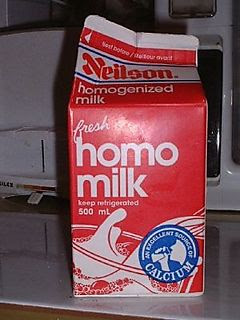 I think this a great idea! I hope they get more suckers to join.

It'll make it so easy to know what brands to boycot.

I second that - it'll be nice to be able to avoid OVerus (nice name, by the way: O Truth Over Us!)

But this is fair enough, isn't it? I mean, liberals have been boycotting grapes and Nestle for years, right? Does suggesting there be a logo make a difference? How is this different from people who only buy chocolate labeled Fair Trade?

(Admittedly, this exact case is pretty stupid and transparent self-interest.)

I guess it's fair, but it's also pretty arrogant. Who is this guy to decide what the "Christian" position is? According to his figures, 77% of US adults are Christian, but plenty of polls show that far less than 77% agree with him on some of these issues.

That milk was probably produced right around where I live! :) Uh, not that I drink milk.

I actually use hexures on things to avoid stealth dairy -- if it has been certified Pareve, I know I'm good to go.

"OVerus is actually a spin-off from the effort to market a “pro-life” brand of coffee."

He realizes that coffee beans are 'just like' little coffee plants, right?

"He realizes that coffee beans are 'just like' little coffee plants, right?"

Yes, but coffee beans are dark-skinned, so it's okay.

Oh the irony. One of the largest Christan group that follows the inanity of OVerus's family values/marriages nonsense is the Mormons, who won't drink coffee. Alas poor poor Miklas.

Holy crap, it's the Fosterites from Heinlein's Stranger in a Strange Land: they require all of their followers to buy products with the church label on. Buying competing unlabelled products is a sin.

Of course the church takes a cut...

"Conservatively, this projection is based on the assumption that one out of five will switch."

I guess he's using "conservative" in its modern meaning: crazy.