Seeing right through it in SF

Did you make it to last weekend's crystal fair at San Francisco's Fort Mason? I didn't, but Steve Rubenstein did.

Rubenstein filed a report on the Great San Francisco Crystal Fair with the San Francisco Chronicle, which published it in last Wednesday's Datebook section. Datebook offers comics, media news, movie reviews, and “soft” news—the kind of news that is exempt from the tenets of hard-nosed journalistic skepticism. It's where newspapers like to tuck items about psychic fairs, seers, mediums, and ... crystals!

Rubenstein, however, can't help himself. It appears he is just too rooted in the traditions of old-fashioned journalism to give himself over entirely to the gee-whiz credulity that characterizes much of today's media coverage of all things woo:

What you do at a crystal fair is wave crystal wands, hold crystal amulets, buy crystal necklaces and put little pieces of crystals in your shoes, which can either relieve foot pain or cause it, depending on your level of commitment to the program.

It doesn't sound like Steve is really getting into the spirit of the thing. He even sneaks in some actual science:

With crystals, structure is all. In most substances, atoms are scattered in a hodgepodge. In a crystal, they are lined up in neat little rows. Perhaps you cannot see the neat little rows but they're there. The neat little rows also exist in an ice cube and a speck of salt, either one more affordable than a crystal bowling ball, but the crystal sellers made scant effort to point that out.

The aforementioned crystal bowling ball? It carried a $25,000 price tag at the crystal fair and is supposed to generate wealth. Well, perhaps. At least for the seller.

Rubenstein wasn't the only fair attendee who regarded the proceedings askance. Some folks go to the fair simply to enjoy the beauty of the minerals on display. They aren't looking to attune their psychic vibrations to etheric crystal tuning forks.

And yet through the ages there are those who insist that rocks don't do much besides sit there and be rocks. One such fellow was Chuck Zuspan, a retired oil company geologist from Oakland who comes to crystal fairs to admire the specimens for their own sake, not for any punch they pack. He declared himself to be levelheaded when it came to rocks, which must be drilled through in order to get to the oil but which otherwise are worthy of respect just for being what they are.

“Rocks pretty much just sit there,” he said. “That's been my experience.”

He was standing in front of [Barbara] LaRocca's booth, admiring her crystal wands, and LaRocca felt the vibrations and sensed an opportunity to make a believer from a skeptic. She grabbed the nearest $4,000 wand and asked if she could wave it over Zuspan's chest, where LaRocca said she sensed there was some tightness—perhaps a pending heart attack, perhaps not, but you can never be too careful.

Perhaps yes, perhaps no. Very difficult to argue with that, I admit.

After several minutes, LaRocca asked if Zuspan felt any better and the geologist smiled and said that he certainly did not feel any worse, and both parties walked away pleased.

“I'd love to say I felt something,” Zuspan confided later. “But come on. It's a rock. I'm 60 years old. I'm not about to change my belief system.”

One wonders if the 60-year-old retired geologist was wearing a digital watch. Purveyors of crystal woo delight in pointing out that digital watches mark out time using quartz crystals as oscillators (creating vibrations!). Of course, digital watches also cheat by using electricity instead of tapping into psychic energy, but I'm sure it's just a matter of time before researchers into psychic technologies are ready to market psi-powered timepieces.

Rubenstein closed off his article with some rueful remarks from wand-merchant LaRocca:

LaRocca admitted that scientists do not make the best customers for her $4,000 wands and was not surprised that Zuspan did not buy one.

“He's a geologist, for goodness sake,” she said. “I should have demonstrated this with one of these wacky new age people wandering around here. That's who I get the most response from.”

By golly, I agree with her. The demonstration would have been much more effective with a true believer. More entertaining, too. As for the geologist, he was burdened with too much actual knowledge and not enough true faith. Sounds like he had a good time, though.

And so, I think, did Rubenstein. 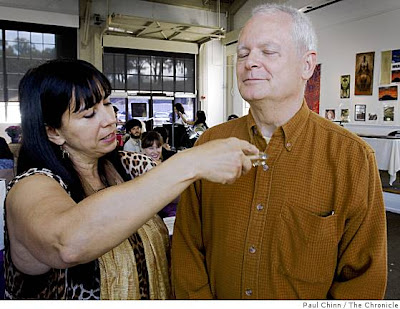 Photos by Paul Chinn for The Chronicle
Posted by Zeno at 12:30 PM

Chuck Zuspan wasn't telling all he knew. The truth is that rocks tell stories. They don't sing out at you, of course, you have to look at them in the context in which they were formed, and tease their stories out of them with much hard work and many temporary misunderstandings. The stories the rocks tell, taken together, detail nothing less than the tectonic evolution of the earth. There are many, many rock stories still untold.

But I wouldn't try explaining that to either a woo-peddler or a reporter, so I certainly can't blame Zuspan.


“Rocks pretty much just sit there,” he said. “That's been my experience.”


Big Skepticism is Hiding The Truth!!!

Guys who drill through rocks to get to the oil don't want to hear the stories!

Ridger, of course the guys who drill through rocks want their stories, especially the ones about how the rocks formed structures to capture oil in reservoirs. Those stories are part of the great tectonic evolution tale as well, they just have some other interesting information to share.

Anthropomorphism aside, the amount of geologic analysis that goes into developing a new oil field, and the tools and equipment those guys use, is just breathtaking to me (and I'm a former software engineer and something of a techie as far as electronic tools are concerned). If one of those guys can politely and graciously fend off the woo, I've just learned a lesson in diplomacy.

I'm amazed that LaRocca was so... honest, about her customers.