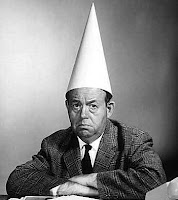 Dad and I negotiate a truce

My father is working through his disappointment at the election results. He's one of those people who took completely seriously the right-wing smear campaign against Barack Obama (you know, the Marxist-Leninist socialist candidate for president, who is planning to enslave us all). If he hears Rush say it on the radio, it must be true. It's sad.

I tossed his last e-mail back at him, complete with a line-by-line refutation of the right-wing political screed he had forwarded to me. It was easy to refute, just another typical paste-up job of lies and semi-facts. Why did he think I would fall for it? Why did he fall for it? And, I had no doubt, he would ignore my rebuttal. With a touch of exasperation, I accused him of treating me like a chump: “Although you routinely dismiss my opinions as those of someone who is naive and brainwashed, please allow me to point out that I deserve just a little credibility.”

That was enough to elicit a reply from him. One of his statements struck me as particularly significant:

I have NEVER said or thought that you are naive and I know you have the best intention. But I also know that academia thinks of me as some idiot because I do not have a degree of some kind. I would much more like to have a little bit of God given wisdom than a lot of man made knowledge.

All I want is to not have the government controlling my life and that is what Liberals want. Give me a reason to be a Liberal and I'll see if I can live with it.

Wish you the best,

Of course, I find it ironic that Dad is concerned about liberals controlling his life after what's happened to us during the eight years of the Bush administration. He really should have paid more attention. Nevertheless, that was not, in my opinion, his most remarkable assertion. I was struck much more strongly by his claim that we academic types consider him an idiot for his lack of a college degree. That startled me. I consider him woefully misinformed, but I have never thought of him as an idiot.

I grew up around books because Dad is a compulsive autodidact. His farm chores during his teen years kept him out of high school, but he stocked his home with encyclopedias, dictionaries, and The Book of Knowledge. His children were graduating from high school before he finally got around to squeezing in some adult classes and earning his GED. Dad encouraged all of us in our schooling, but I was the only offspring who really seized the opportunity. Until I read Dad's e-mail message, I had not realized that he harbored such a strong sense of inferiority—or at least the conviction that he was perceived as inferior.

I worked my way toward a response in the message I sent back to him:

I really doubt you should try to be a liberal. I don't think it would suit your temperament. Perhaps once, when JFK was president, but probably not now. However, it would be nice if you didn't confuse us with socialists, communists, or terrorists, which is the sort of thing happening every day at McCain/Palin rallies during the final stretch of the presidential campaign. They drive me crazy. I'll be glad when it's over.

As for controlling people's lives, when have we lost more freedoms than under the current administration? I'm not even sure what conservatism is supposed to mean in an era of big spending, huge deficits, and financial collapse. (I really wonder what Barry Goldwater would say if he saw any of this.) That's probably why the liberals are about to get a chance to show if they can do any better.

You puzzle me with the comment about how academia regards you and other people who lack college degrees. Maybe some academicians are that way, but I'm pretty well connected at a large community college and the University of California. I have never heard my colleagues in those venues sitting around talking about how stupid people are if they don't have degrees. Why would we? We know all too well that some of the biggest idiots of our acquaintance are right there on our campus and they have very nice degrees -- that don't seem to have done them much good. In fact, a lot of us have similar life experiences and appreciate our good fortune: we were able to get our advanced degrees because we were supported by family members who grew up at a time when they couldn't get any of their own. We would not deliberately abuse and insult the loved ones who made our good lives possible, even if we don't always agree with them.

So where is this coming from? If we professorial types aren't pointing at my father and branding him an imbecile, why does he think it's occurring? My best guess is that Dad hears it from his favorite sources of information: Fox News and right-wing talk radio. These mouthpieces for extremist rhetoric have probably been telling my father that the educational elite looks down its collective (or collectivist?) nose at him. I can't be sure, because I can't listen to these faux news sources for more than a few minutes at a time, but that's my guess.

Interestingly enough, Dad has never felt the impulse to talk about this with the academics sprinkled throughout his large extended family—not even his eldest son. Instead of letting us speak for ourselves, he absorbs and believes the twisted cant of the right-wing news sources. I'd say that's really stupid, but I'm sure Dad would take it personally.
Posted by Zeno at 4:00 AM

I have encountered this reaction before. A friend of my mother had an inferiority complex and thought that us people with degrees thought that we were superior and that she was stupid and that we looked down on her because she did not have a degree. It was all in her mind, but there was no way to persuade her otherwise.

Not to derail this thread, because I know your response was all about his first paragraph, but I was wondering about his second paragraph: Why does he think that liberals want to control his life? I hear this sort of thing a lot from conservatives, but when pressed for an explanation, usually all they've got is "higher taxes". Then there's "they're oppressing me by not letting me discriminate" against some hated group. Business owners have more complaints: liberals won't let them pollute, and insist on minimum wages. But none of this sounds like "control" to me.

I'm not being rhetorical -- I genuinely don't understand this kind of rhetoric, unless it's just projection.

It's a good question, William, but I never get a good answer from my father. His resentment of supposed "government control" may have some roots in his years as a farmer, when he would chafe at state and federal regulations about what he could do with his land and his cattle (limitations on federally subsidized irrigation water, dairy price supports, and crop limits). Sure, there were subsidies and price-support checks, but he resented them.

But that was many years ago. Dad has been out of the agriculture business for decades. Now he kicks about Medicare rules and managed care, griping that it limits his options. (He's sufficiently well off that his options are broad and he'd like a more free-market approach to health care -- or so he says.) But is this the "control" that he so resents? I strongly suspect the real reason is that Rush Limbaugh and Sean Hannity and Dennis Prager tell him several hours every week that liberals are out to control our lives from cradle to grave. And he believes them.

That is sad, and has nothing to do with education. My dad has all kinds of degrees from prestigious institutions, but he buys that line from the same source. Even worse, he buys the line coming out of Salt Lake almost completely without question. No, make that completely without question -- he manages to not hear the parts he would otherwise have problems with. People are strange.

Having been recently brought to tears again by an unusual reminder of my father's death (in summer '06, I guess I'm still grieving) I encourage Zeno and every other reader to try to keep fences mended with parents, no matter how annoying they can be. When they're being uber-annoying, think of those interactions as food for your blogs or lunchtime discussions with coworkers.

Be patient with 'em. Under all that bluster, most of them still love you unconditionally. That's a very great and wonderful thing.

Hailing from the same background, the response I get quite frequently revolves around gun control. Obviously, guns are synonymous with freedom.