It's the thought that counts

Ignatius Press has sent out its Fall & Winter 2008 film catalog, just in the nick of time for holiday shopping. Ignatius Press is not quite an official organ of the Vatican, but the San Francisco based publishing house has reaped a rich harvest from its longtime role as Joseph Ratzinger's principal English-language publisher. Now that Ratzinger is pope, Ignatius has been reissuing his books with new covers bearing his papal cognomen, Benedict XVI. A search of the Ignatius Press website for “Benedict XVI” produces 88 hits from the catalog. Included are the pope's own voluminous writings, biographical works by others, and CDs of Gregorian chant (which, I presume, represent the pope's preference for easy listening after a long day of struggling with the evil forces of secularism). In a class of its own is Joseph and Chico, a short illustrated biographical memoir by the pope's cat. Something for the kids, of course.

The Ignatius Press film catalog does not present the many books issued over the publisher's imprint, except for those in audio format. It's really all about videos and art. One of the videos features ardent lefty Ed Asner as Pope John XXIII, which is a bit of a surprise in the midst of so much conservative Catholicism. The art includes a nice wall chart of all the popes and various iconic images of Jesus and Mary. I paused for a moment to read the description under a serene depiction of a young woman holding both a child and a lamb. The blurb said it was a madonna and child (and lamb) painted by the artist William Bouguereau and titled Innocence. 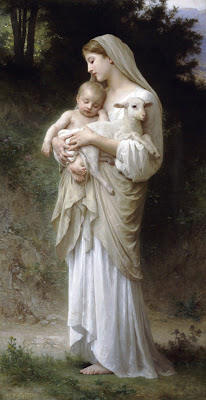 The artist's name and photo-realistic style seemed familiar to me, but not the subject matter. Didn't my long-ago art history class select different works to epitomize Bouguereau's oeuvre? A quick Internet search demonstrated that I was not mistaken. Bouguereau was devoted to painting human figures, but he was especially fond of painting them undraped (which, as you must know, is a euphemism for stark naked). Venus, for example, is born full-grown from the sea foam, evidently the beneficiary of a really effective prenatal bikini wax. 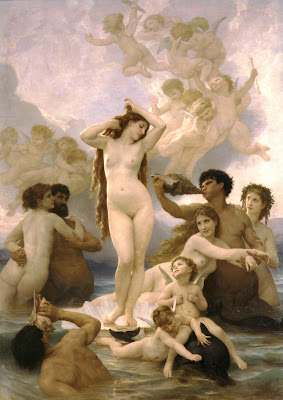 I understand why Ignatius Press decided to be selective about the works by Bouguereau that they chose to offer in their catalog. Venus, after all, is a pagan goddess. She would never do. However, next time Ignatius Press might see fit to offer a print of one of Bouguereau's other conventionally religious art works. Here's one titled The Return of Spring, which is completely different from the birth of Venus. That would be an inspirational choice, although one might not choose to hang it on the wall next to Innocence. 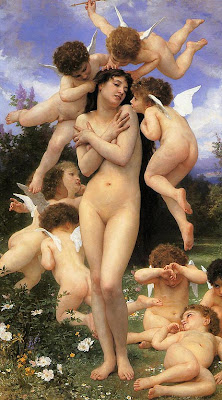 Or how about an angel? That's pretty religious. You could give a print to your favorite altar boy. 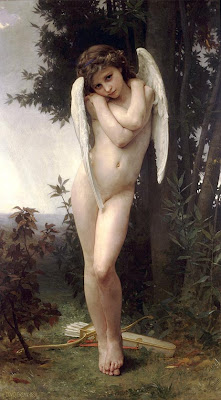 There's a lot of untapped Bouguereau out there for future Ignatius Press catalogs. What might next Christmas bring?
Posted by Zeno at 11:00 AM

Surely that "angel" is Cupid, aka Eros?

You're correct, of course. The title is "Cupidon." I was being deliberately obtuse and wry when I wrote that.

By the way, did you notice that Bouguereau might well have used the same model for both Venus and the madonna?

And while it's nice to learn that the pope is a catperson, I don't think he can have been paying much attention to the critter.

The only thing cats care about is where their next meal is coming from.