A short lesson in semiotics

Please check it out

I had never heard of semiotics until about twenty-five years ago, when I read Umberto Eco's The Name of the Rose. Eco, it seemed, was a semiotician. The biographical sketch of the author explained that semiotics was the study of signs, symbols, and significance. The Name of the Rose was fraught with symbology, including an elaborate red herring involving an apparent recapitulation of the signs of the apocalypse. I filed semiotics away as an interesting word and thought little more of it.

Our recent ill-fated fight against Proposition 8 in California (which in the longer run may yet bear interesting fruit) reminded me of the importance of symbols and the meanings people ascribe to them. The first campaign posters against Prop 8 included a green check mark in the “O” of “NO.” I remember in grade school that a check mark used to indicate that my teacher had found a mistake in my work. By the time I was in college, however, the check mark had morphed into a symbol of approbation and it was supplanted by the “X” symbol as a signifier of error. Therefore the first anti-8 signs might have been subtly misleading, suggesting that 8 was okay. See? It has a check mark! (A green one, no less.) 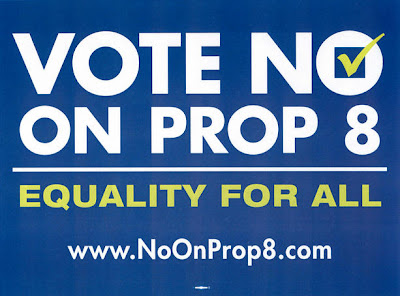 As the campaign heated up, new leadership took over the opposition campaign. The new campaign advisors immediately amended the signs, replacing the green check mark with a bright red X. They sharpened the words, too. Now it was clear. Proposition 8 was wrong. It was in error. The new signs blossomed everywhere, although the old version was still evident at campaign rallies (and on my bumper).

It was, unfortunately, too little, too late. Would the red X have saved us if we had seized upon it sooner? Perhaps. I think, rather, it was our overconfidence and late start that cost us dearly. If we had made better use of the opposition of Sen. Obama (more than a million Obama voters must also have voted for Prop 8) and Gov. Schwarzenegger, the election might have turned out better, but that's hindsight speaking. Instead, we are left with a small lesson in semiotics and an unfulfilled agenda for the future.
Posted by Zeno at 10:00 PM

This is interesting (well, to me) on several levels. First, you have pointed out yet another cultural difference between you (Americans) and us (Brits), in that your check mark ('tick', to us) can ever have a negative connotation. In the UK, it always means either that something is correct, or that it has been completed. The big old X was the symbol to dread on one's schoolwork. Having lived here in the US since 1990, and having had two sons go through your education system, you might reasonably expect me to have sussed out it long before now.

Next, the campaign symbols. I well-remember being thoroughly confused the first time I saw the original one (online, that is, since I don't live in California). It was urging its readers to vote NO, apparently on a proposition whose goal was "Equality For All". Why would I want to do that? And it had that tick there, too - even more confusing. Naturally, I had to find out for myself what this proposition was all about, which quickly led me to understand what the slogan was trying to convey. But as a slogan, it was a confusing failure, particularly since its intention was to immediately persuade voters. The later slogan is MUCH clearer, and there is no doubt at all as to its meaning.

In any case, let's hope that reason will eventually prevail.

The yes on 8 signs, by contrast, were very effective. I wrote about them on my blog a few weeks back. Here's the link

Ray, I've been in living in the US since 1979, and I've never head of a check being a negative mark. Until this post, at least.

As for the signs, I remember saying in a comment on this very weblog that it seemed backwards, and that one side or the other might profit by passing that misconception off on the voters. How many people voted "yes" to allow gay marriage or "no" to disallow it? Maybe not enough to overturn, but I'll bet it's more than people think.

I'd never heard of the V being anything but positive either.

I grew up in central California and grew accustomed in grade school (during the 50s and 60s) to the notion that a check mark was a dire thing. In my elementary school district anyway, throughout eight years of grammar school, only wrong answers were marked, invariably with a check mark. Later, in high school, it was confusing when check marks suddenly became good things and the X was introduced as the new symbol for flagging errors.

Some California schools are certainly still using check marks for errors because I occasionally get students who are confused when I correct their papers. This occurs, however, only in the most elementary courses, like arithmetic and prealgebra. Students in other classes have already become accustomed to the "check = good" "X = bad" system by then, even if they didn't grow up with it.

I have no idea what the overall pattern is among California's thousands of elementary schools or whether there's a characteristic geographical distribution. It does seem to me that "check = bad" is limited to early grades only, but only at some schools.

I'm beginning to get the feeling that this isn't a US/Britain thing so much as it is a California/sane people thing.

Another vote for check=good no matter what color it is.