Proposition 8 and the future

Where there's a will

The passage of Proposition 8 was very effective in taking the edge off my election night euphoria. I went to bed hoping the late returns would tip against the initiative, but in the morning it seemed clear that the narrow-minded bigots had won. Damn.

It took some reflection before I realized that the measure's narrow passage was not as crushing a defeat as it initially seemed. Yes, had we prevailed against Proposition 8, marriage equality would have been secured in California and its impact on the rest of the nation would have been enormous. Yes, our failure has postponed the day when full equality will exist throughout the nation. It's damnably disappointing. Nevertheless, the seeds of our future success are embedded in the bitter fruit of the homophobes' success.

The bigots thought they had settled the matter back in 2000, when Proposition 22 garnered the support of 61.4% of the electorate in writing the one-man/one-woman definition of marriage into California law. Every challenge to Proposition 22 in the intervening eight years has been met with the same sorry one-note whining about “the will of the people.” One of the whiners was our girly-man governor in 2005:

A day after California’s Legislature became the first in the nation to pass a bill to legalize same-sex marriage, Gov. Arnold Schwarzenegger announced through an aide Wednesday that he would veto the measure “out of respect for the will of the people.” In a careful statement, Schwarzenegger press secretary Margita Thompson invoked the voter approval in March 2000 of Proposition 22, which said: “Only marriage between a man and a woman is valid or recognized in California.”

“The governor believes the matter should be determined not by legislative action–which would be unconstitutional–but by court decision or another vote of the people of our state,” the statement said. “We cannot have a system where the people vote and the Legislature derails that vote.”

Ignoring the Legislature's role in enacting or amending statute, our governor punted to the courts, which finally took up the challenge in the wake of San Francisco's issuance of hundreds of same-sex marriage licenses in 2004. Once the state supreme court struck down Proposition 22 as denying equal protection under the law, the same sad refrain sounded again:

“It's outrageous that the court has overturned not only the historic definition of marriage, but the clear will of the people of California, as expressed in Proposition 22.” said FRC President Tony Perkins. “The California Supreme Court assumed the powers of a legislative body by imposing same-sex ‘marriage.’ However, in 2000, the people of California spoke loudly and clearly on the value of marriage when 61 percent of voters approved Proposition 22.”

They all say the same thing, don't they? Why have they not noticed how “the will of the people” is a changing thing? This is the year, surprisingly enough, when we installed an African-American in the White House. This is the year, too, when support for “traditional marriage” dropped from 61.4% to only 52.5%. At this rate, it will take only a couple more years for the traditionalists to lose their majority. What will they then say about “the will of the people”?

I can tell you!

The Roman Catholic Church and other anti-abortion groups in California have labored mightily to chip away at the reproductive rights of women. They found what looked to be an attractive angle of attack, something which they could sell as a defense of parental rights. In 2005, the same year that Schwarzenegger was ducking and hiding from the same-sex marriage he claimed to support in theory, the anti-abortion forces put Proposition 73 on the ballot to require that minor females notify their parents before obtaining an abortion. If it passed, they'd come back for more later. The voters, however, apparently decided that Proposition 73 was not a good idea. In a functional family, the girl would be more likely to tell her parents on her own. In a dysfunctional family, it was conceivably dangerous for her to do so. Proposition 73 received only 47.3% of the vote. That was the will of the people. 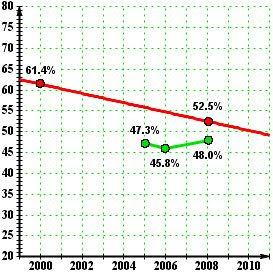 Have they had enough? Of course not!

“We intend to go right ahead and try again on several fronts, including the initiative front,” said Albin Rhomberg, a spokesman for the Yes on 4 campaign. “We know that there is strong support for it. We feel we raised a very important issue and are determined to keep raising it.”

So much for honoring the will of the people! I hope they'll forgive us when we insist on coming back to the issue of marriage equality (but I doubt they will).

We will be back. And we will win.

In the meantime, I hear that one of my nieces is getting married next year. I'm fairly certain virtually all of my family voted in favor of Proposition 8. Perhaps I'll wear my “No on 8” button to the ceremony. I probably won't be asked to offer a toast at the reception.
Posted by Zeno at 7:30 PM

the anti-abortion forces put Proposition 73 on the ballot to require that minor females notify their parents before obtaining a divorce.

Uh, I think you used the wrong word here.

Also, have seen the challenges to Prop 8 that have been filed? What do you think of the legal basis for them?

Thanks for catching that for me, Rhoadan. I fixed it.

I'm not a lawyer, so my opinion on the lawsuits against Prop 8 won't bear a lot of weight. I doubt, however, that the California supreme court will find a constitutional amendment unconstitutional. It's constitutional by definition, isn't it? It's not easy to use the state constitution against itself. Besides, our supreme court justices are all fairly conservative (six out of seven were appointed by Republican governors), though you'd think they were all crazy radicals from what the anti-gay lobby has to say.

It's possible, I suppose, that they could rule that Prop 8 violates the equal protection clause of the federal constitution. That would set in motion an appeal to the U.S. Supreme Court, where the outcome is anything but certain. Of course, by the time the issue got there, a couple of the justices might have been replaced by President Obama, who's not very keen on same-sex marriage, but still opposed Prop 8. (A proper radio or TV spot from him during the last weeks of the campaign would have turned enough of the black vote so that Prop 8 would have been defeated, but that never happened for some reason.)

Um, it's still messed up. Instead of replacing the word "divorce," you inserted the correct word in front of it.

As for the legal challenges, bearing in mind that I am also not a lawyer and neither is the author of the post I linked to, it apparently depends on whether Prop 8 is an amendment, in which case, it's time to kick it up to the Feds (and then you have to contend with the Defense of Marriage Act) or a revision, in which case the state Supreme Court can invalidate it on the grounds that it needed to be approved by a two thirds majority of the legislature before being put to a popular vote.

Ooh, that would be fun, if the California Supreme Court invalidated it again. The wingnuts would have a fit.

I'll make the popcorn if it happens. First though, the CA Supreme Court has to rule on whether it's an amendment or a revision.

And what's up with Arkansas? I mean, seriously - what happened there? Heavy red-shifted voting, deciding it's better for kids to be institutionalized that adopted or fostered by any single person ... Will they be coming for the widow's children next? Forbidding divorce if kids are around? Compulsory surrender of babies by single moms? (all rhetorical, we know what the purpose was)

They'd really like to do this, if they could find a way to make it apply to white women only. At base, most of the pro-forced-birth rhetoric boils down to "Make moar white baybeez!!" I just read an article on Alternet (can't find it now) about a woman who was anti-abortion but became pro-choice after she discovered the hypocrisy inherent in that none of the "pro-life programmes for single mothers" would enroll her so that she could place her mixed-race baby up for adoption; they wouldn't be able to place the baby, no demand, they said, and therefore weren't willing to help her if she wasn't going to birth a marketable commodity.

Fortunately, they haven't figured out how to legislate applying it to only white women yet; in the meantime, they'll have to stick to using the usual but much less reliable social coercion.