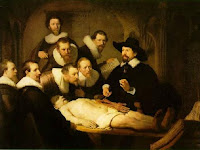 Didn't get the memo

'Tis the season of Schadenfreude. It's a happy time, these days after the general election of 2008. The right-wing babblers on talk radio and the Free Republic ranters are more entertaining than ever as they cry in their beer and foretell the collapse of the United States and all of western civilization. Here's a hint, guys: western civilization has been in decline all during the Bush administration. We voted for a Democratic president and congress in hopes there might still be time to salvage it. You may have noticed that most of western civilization is pleased with the outcome, including a large majority of the American public.

The conservative pundits and political theorists are having some trouble piecing their new narrative together. After years of defending Bush, they've discovered he wasn't really a conservative (and neither was McCain), so the Republicans' thumping defeat last week was not a repudiation of conservatism. Right. The American public actually wants Obama to back off all of his campaign promises and govern from right of center. Right.

This was the note sounded by an unsigned editorial in the November 14, 2008, edition of the Sacramento Union:

What the election was not was a rejection of conservatism.

To be sure, voters rejected the last eight years of Republican rule. But the Republicans in charge long ago surrendered the mantle of conservatism, if they ever possessed it.

In addition to trying to salvage conservatism's reputation from the wreckage of the election, the Union's editorial writer searched for and found a white lining to the election's dark cloud:

Barack Obama's election last week was a testament to the best funded and orchestrated campaign in history. And, happily, it may have permanently put behind us the false and defamatory notion that America is a land of opportunity only for whites. Obama's ascendancy means forced retirement for the likes of Jesse Jackson, Al Sharpton and other race-card professionals.

Hallelujah, my pale brothers, let us celebrate the end of opportunistic black racism, which has so long blighted our land! Free at last!

As I said, the Union's editorial was unsigned. I'm guessing, though, that Union columnist William E. Saracino did not have a hand in it. The editorial appears on p. 13 of the print edition. Turn back to p. 10 and you have Bill holding forth on “Politics 101: Lessons from the General Election.” Lesson number four declares:

4: America is still a racist country.

The naïve among you might think that electing a black President will silence the guilt-ridden liberals' whine about America still suffering the residue of slavery and Jim Crow. That will never happen. Jesse Jackson, Al Sharpton, Jeremiah Wright and scores of other race-hustlers make big money off white guilt and black resentment. Facts will not get in the way of their racist gravy train.

Way to close ranks, guys! The extreme right wing remains resolute and unified, the naïve walking hand in hand with those who call them naïve.

Somebody pass the popcorn, please.
Posted by Zeno at 10:00 AM

Let me get this straight: this guy is saying that it's opportunistic for black public figures to use racism in America for political gain? Talk about blame the victim!

I do think most people are inherently them-ist. For an individual to be not them-ist s/he needs both a willingness to not be them-ist, and a daily or semi-daily, trust-based interaction with people of that race/origin/religion/orientation, to truly see them as part of "us".

I grew up in a racist white household, with parents that managed to think ill of "blacks" -- the abstract concept -- while experiencing many good black friends who were somehow "the exceptions". Unfortunately for the family bigotry, these friends were my first encounters and role models for blacks, and so the "exception" notion just rolled off my back. But if I hadn't had such experiences, I'd have grown up as prejudiced as many of my white classmates.

Thus, most white people who don't think of black/Hispanic/Asian people as "them" do so because they have had positive, trust-based interactions with such people. Quite honestly, I can only speak from the white perspective, and this may be a necessary but not sufficient condition for people of color, not conditioned to white privilege, to think of whites as part of "us".

I expect that a similar dynamic holds true of gays with respect to heterosexuals. I never thought much about gay marriage until I acquired gay friends who wanted to marry. Then it became a real issue, because why should I have something they can't have?

I also agree that Jackson, Sharpton, and their ilk make a living off generating divisiveness, but what politician doesn't? After the recent Republican campaign painting all of us with college degrees as being somehow un-American, the Racist Right Wing can easily make itself look like a sea of pots chanting slogans at a sea of kettles.

Got room for another helping of Schadenfreude, Zeno?

(actually, my own Schadenfreude is somewhat tempered by the thought of all those families whose wage-earners Dobson wasn't focusing on, but nothing I can do about that...)