Rooting for the Enemy 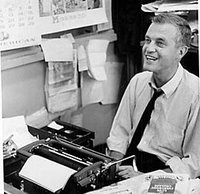 It was spring semester in 1971. I was sitting in the college library reading newspapers. After scanning Herb Caen's column in the San Francisco Chronicle, I read Art Hoppe. Suddenly the morning became memorable:

The radio this morning said the Allied invasion of Laos had bogged down. Without thinking, I nodded and said, “Good.”

And having said it, I realized the bitter truth: Now I root against my own country.

Even if you lived through the era of the Vietnam war, you may not recall the invasion of Laos. Although Hoppe cited the “Allied” invasion, it was a predominantly American endeavor, as with every other major military action in Indochina. (Sounds familiar, doesn't it?) In the third year of his presidency, Richard Nixon had decided the best way to win the Vietnam war was to expand it into adjacent nations, hence the incursion into Laos. With a fine lack of appreciation for the nature of the insurgency and guerrilla warfare, Nixon expected our troops to find and root out military sanctuaries sheltering North Vietnamese troops and Viet Cong from the south. They found no such thing.

I have come to hate my country's role in Vietnam.

I hate the massacres, the body counts, the free fire zones, the napalming of civilians, the poisoning of rice crops. I hate being part of My Lai....

We are frequently told it is a mistake to try to draw comparisons between Vietnam and Iraq, but comparisons are inevitable. Both conflicts were launched on pretexts later exposed as false (the Gulf of Tonkin incident in the case of Vietnam, the infamous “weapons of mass destruction” in the case of Iraq). In both wars critics of the federal administration were accused (and are being accused) of favoring the enemy. As Art Hoppe explained, however, “I don't root for the enemy.” Rather, “I hate what my country is doing....” Hoppe was rooting against the war and against the mendacious leaders who took us into it. The bitter truth is that the liars who lead us into disaster suffer no great consequences from their incompetence. We cannot take much satisfaction in being proved correct in our positions when confirmation comes in the form of casualties and body counts. George Bush ends up with lower approval numbers in the polls. The men and women in uniform end up dead or maimed in mind and body. Their suffering leaches all the smugness from shouting “I told you so, asshole!” at the president and his minions. We have anger. We do not have joy.

The super-patriots in the my-country-right-or-wrong crowd have a much easier job as they wave their flags and sing out the national anthem (getting the words wrong, of course). They viciously accuse war critics of demoralizing the troops (even though we receive messages from soldiers praying for a swift withdrawal) and encouraging us to work for the war's end. Some soldiers, of course, do hate it when the war effort is criticized, but they may be forgetting that the military used to be devoted to protecting American freedoms, not shutting them down when dissent becomes inconvenient. The super-patriots prefer instead to fetishize our unitary president as an undifferentiated amalgam of war leader, chief executive, and autocrat. All hail the great leader! 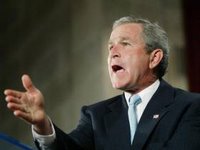 It would, in a way, be wonderful if the Bush idolators were correct and we were wrong. I don't for a moment believe that's true, because there is no credible evidence to support that happy conclusion. Such evidence would entail success in at least one of Bush's endeavors. Is the quick collapse of Saddam Hussein's regime an example of Bush success? In a limited way, yes, although the short-lived glow from that victory vanished in the chaotic aftermath. Furthermore, it raises a question. Why did Rumsfeld insist that a small military force was sufficient for this bold stroke? It suggests he knew that Saddam had no weapons of mass destruction to unleash against the American troops.

Is the death of al-Zarqawi an example of Bush success? Only if you forgive the administration for sparing him in the run-up to the American invasion because his activities in northern Iraq were seen as an additional argument in favor of the Bush war plan. We could have taken him out much sooner.

Was Bush's quick trip into Baghdad the victory lap that his supporters said it was? Unfortunately for the administration's spinmeisters, the president's mad dash into and out of Iraq's capital city underscored the dangerously unpacified environment through which he scampered. There were ironic historical parallels, too, as noted in a Kos diary:

The Bush WH always rejects parallels to Vietnam. It's ironic, accordingly, that it created one of its own yesterday as part of its ongoing propaganda effort for an utterly misbegotten war.

LBJ visited Cam Ranh Bay on 10/26/66. His visit was to a highly secured area, and it only lasted a few hours. Its sole purpose was to support the myth that a corner was being turned in Vietnam.

Nixon visited Vietnam on 7/30/69. His visit, as I understand it, was kept secret in advance. It also lasted a few hours, and its purpose was also to support the myth that a corner was being turned in Vietnam.

These obvious historical parallels appear to have been missed in news coverage today.

I think I would be able to endure any embarrassment that I might experience if it were to turn out that Bush is the brilliant war leader that his apologists claim. It would be worth it. Rather than have the continuing opportunity to denounce a president I don't support, I'd much prefer to have my former students, based now in Iraq and Pakistan, back home safe and sound. When Bush screws up, they are the ones who get screwed.

Unfortunately, our nation's fate (and the world's) is to endure thirty months more of Bush disasters.
Posted by Zeno at 10:00 AM

Your post is a very poignant and makes some excellent comparisons to the misguided wars in Vietnam and now in Iraq. Having grown up in SF and being a student at SF State during the Vietnam war, I could readily identify with your post and vividly remember Art Hoppe moving from social observer to social critic, especially against the war, in the late 1960's.

I strongly believe that now is the time for Nancy Pelosi and the Democrats to say they will impeach Bush should they win the House this fall. Otherwise, the administration has a pass for doing whatever they want to do for the next year and a half. God forbid! She needs to take back her statement of a couple of weeks ago and go after this administration in the same way Paul Murtha is doing. Instead, he's out there almost all alone. Not only will a statement on impeachment put the president on notice but it just might help the Dems win the House as more and more voters are feeling lost and saying "who speaks for me."