Cashing in on Jimmy Carter 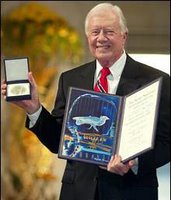 Clio is notoriously fickle. The muse of history frequently changes her mind about the men and women she records in her diary. In the longer run, however, her opinion tends to settle down a bit. In recent times, Clio has been warming up to Jimmy Carter, who once seemed a strong contender for worst president ever.

Carter has been helped by two major factors. His much-maligned energy policy, with its emphasis on conservation and alternative fuels, is now seen as visionary. When an oil-stained wretch like George W. Bush feels forced in the light of current circumstances to give lip service (though little else) to alternative fuels, you know a seismic upheaval has occurred. Bush himself, of course, is the second factor: a president of such breathtaking incompetence and mendacity that people are now nostalgic for the virtues they once mocked in the peanut farmer from Georgia.

No doubt today's circumstances are a nightmare to the right-wing parasites who cling like unsated leeches to George Bush's body politic. Where will they suck up their sustenance if their host is running dry? In the great tradition of the classic Republican ploy “Look over there!”, some of the conservative extremists who wagered on Bush's continued success are now hedging their bets by seeking to milk the paranoia of the ignorant masses who propelled Reagan and Bush into office. To this end, they are trying to resurrect the old animus toward Jimmy Carter and exploit his status as a long-time bête noire of the right.

Melanie Morgan of KSFO radio in San Francisco, a hectoring voice of right-wing extremism throughout the Bay Area, is one of the leaders of a campaign to censure Carter. She and her allies accuse the former president of what amounts to treason:

Since leaving office, President Jimmy Carter has repeatedly undermined U.S. foreign policy, criticized the missions of the men and women of the United States Armed Forces, as well as embracing known terrorists and terrorist organizations.

Given that Bush's foreign policy has consisted of unilateral and irresponsible adventurism at the expense of our armed forces and the national treasury, we should be grateful there are still some adults around to criticize it. Morgan, however, prefers to use Carter's opposition to the Bush administration to do a little fundraising. She and former California assemblyman Howard Kaloogian created Move America Forward as a lobbying group whose ostensible purpose is to rally public support for the troops (as if anyone is actually against our men and women in uniform, in a clear distinction to being opposed to our commander-in-chief). While Move America Forward tried to garner media attention with publicity stunts such as a national tour in opposite to Cindy Sheehan (the “You Don't Speak for Me, Cindy” road show), the participation of Howard Kaloogian was certainly a negative component of its effort. He tried to use his position in Move America Forward to promote his candidacy for a congressional in the special election to succeed convicted felon Duke Cunningham. He drew unwanted attention, however, after posting a picture taken in Turkey on his campaign website and claiming it was evidence he had toured a pacified downtown Baghdad. Having been exposed as either an incompetent or a liar (or at least someone who employs same), Kaloogian garnered a mere 7.4% of the vote in April's special primary election.

In a flurry of May e-mails to the Move America Forward mailing list, Morgan hyped the supposed progress of the Censure Carter effort: “The Censure Carter campaign is about to make a lot of noise.” While the Move America Forward junk mail campaign continues, it may be having trouble gaining traction with such items as the “Bush Was Right” music video. (Although pretty funny, it's not an intentional comedy skit. The music is performed by the Right Brothers, who sing of our glorious leader's “successes” in foreign and domestic policy.) Just as with Move America Forward, each Censure Carter message concludes with a solicitation for funds. Some of them even begin with money-begging. Here's the subject line of the May 18 e-mail: $3,127 to Stop “Blame America First” Liberal.

Is it all about the money? Frankly, I think that Melanie Morgan is probably a completely sincere right-winger who abhors Carter and wishes she could have George Bush's bastard children. But, yes, it's also all about the money. Look at what she's doing with it:

On Sunday, May 21st we will have a Censure Carter message delivered in an email message sent to over 350,000 subscribers to the online news journal, Newsmax.

On Monday, May 22nd we will launch our TV ad blitz on the CNN and CNN Headline News television networks reaching several hundred thousand households.

Excuse me, NewsMax? Who reads this purveyor of faux news except for committed rightists and the occasional slumming liberal? (I confess!) Talk about preaching to the choir! The exact same thing is true for Drudge and Human Events. These sites would have promoted Melanie Morgan's campaign for free, treating it as if it were a legitimate news story. (In fact, they have.) If it weren't for the spots on CNN, the Censure Carter campaign would be doing nothing more than shaking down the paranoid brethren for more contributions.

When the steam runs out of the Censure Carter effort and the contributions slow to a trickle, what will the stalwart right-wingers do next? No doubt Melanie Morgan and friends will have something to say about the California governor's race, although they're not big fans of Arnold (but his opponent will be a liberal! maybe even a devil worshipper!). Since Arnold is not a pro-lifer, perhaps Morgan will focus on the parental notification initiative that California voters rejected last year but is being recycled by its proponents. I do hope that Morgan stays active in politics, because her support is always a reliable indicator that something is worthy of opposition.
Posted by Zeno at 10:15 AM