Phi: Good to the last decimal 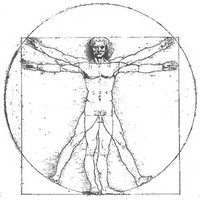 Cleopatra's nose, had it been shorter, the whole face of the world would have been changed.

Dan Brown knows the value of the Golden Ratio, correctly citing it to three decimal places as 1.618. However, as I noted in my earlier post on The Da Vinci Code, I laughed out loud as I read through Robert Langdon's lecture on the importance and significance of this number. As in so many other places in his book, Brown starts with a kernel of truth and then stretches it all out of proportion. This is particularly a pity in the case of the Golden Ratio, where the truth by itself is remarkable enough.

Mathematicians know that the Golden Ratio is closely tied up with the endless list of numbers known as the Fibonacci sequence. Since the Fibonacci sequence provides a model for many aspects of nature, it stands to reason that the Golden Ratio is similarly significant. For convenience, mathematicians usually refer to the Golden Ratio as phi (commonly pronounced fee), the 21st letter of the Greek alphabet, also rendered as φ. Other names for φ include Divine Proportion, Golden Section, and Golden Number. It would seem that people are impressed by it. 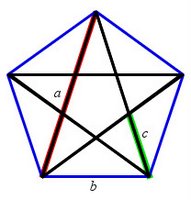 The Golden Ratio has geometric properties that are intimately tied up with the the number 5. If a five-pointed star is inscribed in a regular pentagon, φ will turn up time and again as the ratio of pairs of sides. In the accompanying figure, the ratio a/b is φ, where a is the line highlighted in red and b is one side of the enclosing pentagon. It also turns out that b/c equals φ, where c is the line segment highlighted in green. Notice that the inscribed star has as its center a small pentagon, which immediately suggests the possibility of inscribing a smaller star and continuing the process. Indeed, in theory we could cascade forever into smaller and smaller pentagons and stars, all exhibiting φ in various ratios.

Blown out of proportion

Thus the mathematical properties of φ are genuine, as is its role in many natural processes that involve scaling or Fibonacci patterns. However, speaking through Robert Langdon, Brown quickly goes astray as he overstates the role of the Golden Ratio in nature and art. Here's an excerpt from the nature hype in Langdon's lecture:

“Nobody understood better than Da Vinci the divine structure of the human body.... He was the first to show that the human body is literally made of building blocks whose proportional ratios always equal PHI....”

“Not PHI!” one of the jocks blurted out in disbelief.

“Yes, PHI,” Langdon replied. “One-point-six-one-eight. Want another example? Measure the distance from your shoulder to your fingertips, and then divide it by the distance from your elbow to your fingertips. PHI again. Another? Hip to floor divided by knee to floor. PHI again. Finger joints. Toes. Spinal divisions. PHI. PHI. PHI. My friends, each of you is a walking tribute to the Divine Proportion.”

Uh, wrong! These claims are ridiculous. Brown gives φ to three decimal places, but no one can reasonably compute body proportions to that degree of accuracy. It's bogus.

Although I do not usually consider myself an applied mathematician, I fearlessly collected the tape measure from my tool box and checked the ratio of my full height to my navel height. It's 1.75. A lot of my height is in my legs, so it turns out my navel is 3.426 inches too high for divine proportionality. (Now you know my secret shame.) As for my arms, the ratio of arm length to forearm length is 1.7. Yes, my forearms are too short. I am a veritable monster, escaped from a fun-house mirror.

But is it art?

Once we start talking about ideal proportions, of course, one's mind naturally turns to thoughts of art. Where else would beautiful proportions be more important?

“The mysterious magic inherent in the Divine Proportion was written at the beginning of time. Man is simply playing by Nature's rules, and because art is man's attempt to imitate the beauty of the Creator's hand, you can imagine we might be seeing a lot of instances of the Divine Proportion in art this semester.”

Over the next half hour, Langdon showed them slides of artwork by Michelangelo, Albrecht Dürer, Da Vinci, and many others, demonstrating each artist's intentional and rigorous adherence to the Divine Proportion in the layout of his compositions. Langdon unveiled PHI in the architectural dimensions of the Greek Parthenon, the pyramids of Egypt, and even the United Nations Building in New York. PHI appeared in the organizational structures of Mozart's sonatas, Beethoven's Fifth Symphony, as well as the works of Bartók, Debussy, and Schubert.”

Pretty impressive, wouldn't you agree? I wouldn't. It's more nonsense.

George Markowsky, professor of computer science at the University of Maine, took at hard look at claims about φ in Misconceptions about the Golden Ratio, published in the January 1992 issue of The College Math Journal. He cites several authors who were unskeptically enthusiastic about the supposed presence of the Divine Proportion in the façade of the Parthenon.

To support this claim authors often include a figure like Figure 6 where the large rectangle enclosing the end view of the Parthenon-like temple is a golden rectangle. None of these authors is bothered by the fact that parts of the Parthenon are outside the golden rectangle.... The dimensions of the Parthenon vary from source to source probably because different authors are measuring between different points. With so many numbers available a golden ratio enthusiast could choose whatever numbers gave the best result.

Markowsky isn't kidding. If you think he has deliberately done a bad job of boxing in the Parthenon in a golden rectangle, as in the accompanying figure (which I scanned directly from his article), then check out the examples that Golden Ratio fans have themselves posted: Example 1, Example 2, Example 3. No one seems concerned when the edges of the Parthenon's pedestal are clipped off to make the ratio work out.

There's a similar problems with the alleged presence of the Golden Ratio in Da Vinci's famous unfinished portrait of St. Jerome: you have to cut off his arm to make it fit.

There are many different ways to construct the Golden Ratio, one of the simplest involving nothing more complicated than a square and a nicely chosen circle. One begins with a square that is 2 units on each side. Bisect the square vertically and consider the diagonal (in red) of the resulting rectangle on the right. By means of the Pythagorean theorem, we know that x2 = 12 + 22 = 1 + 4 = 5, so x = √5. If we construct a circle of radius √5, as shown, it will intersect the horizontal line extended from the base of the original square. Use that intersection point as the vertex of a rectangle that incorporates the original square. We see that the rectangle has a base of length of 1 + √5 and a height of length 2. With a handy calculator, one can ascertain that the ratio of the height to the base of our rectangle is (1 + √5)/2 ≈ 1.618.

Now that we know the exact value of φ, the expression involving √5, we could easily write out more decimal places. However, one of the lessons of this piece is that three decimal places is way too much for the fanciful applications of the Golden Ratio, where such precision makes no sense at all, and it's way too little for the true applications, where φ is the companion of infinity. Remember that the Fibonacci sequence goes on forever, as does the geometrical construction of nested stars and pentagons.

And that's only the beginning.

For a rational treatment of one of history's most famous irrational numbers, check out Mario Livio's The Golden Ratio. Livio has worked through the fact and fiction in Golden Ratio lore and produced a readable account of the number's importance. The truth about φ is impressive in its own right, even without the embellishments of the credulous. A good on-line summary of the confusion over φ is available at The Cult of the Golden Ratio at Laputan Logic, where the writer checks out both the Parthenon and Da Vinci's Mona Lisa.
Posted by Zeno at 5:55 PM

You're right that people mystify the golden section and try to use it as a secret magic trick. However, when I was investigating this, I did the same body proportion test you spoke of. I found that the more people I took data from, the more the averages converged on the golden section.

This is, I have to admit, shocking to me. I had no idea that my long-held belief is so wrong.

Well, Thursday, that's one thing that Brown got right. He notes that the smart-aleck math major in Langdon's class pronounces phi as "fee", which is really the way lots of math people prefer to say it. On the other hand, many other people prefer "fie". As you can imagine, whenever I introduce phi in a math class and say, "It's pronounced either fee or fie," someone will blurt out "How about foe?" It never gets as big a laugh as the eager student hopes.

Fee! Fie! Foe! Fum!
I smell the blood of an Mathematician.
Be he true, or be he false,
I'll grind his truth to make my point.

Really, now! That doesn't rhyme at all!

I use phi alot. Not because it somohow magically looks good, but because it WORKS ON PEOPLE. Just look at ALL apple products. Open your photoshop, tak some golden ruler made of golden rectangles, blend it and start some measuring. Old ipod is best for this, not iphone. You will see very quickly how they do their GREAT design, which looks easy on the first look, but many people says, there is some hidden beauty in their products. And yes, there is. All their measurements are based on phi. Sometimes not exactly to spice it up, but many times yes. Check spaces around keyboard on the new macbook pro, just check it. And don't tell me now, that phi doesn't work. It works if you know how to use it and where. My opinion is that phi in art is redundant. Nothing more, nothing less. I could live without it in art. But in graphics which is supposed to make me some money? - Here is the right segment for it.