I am Al Gore's truth squad 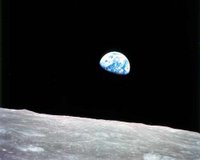 Checking out An Inconvenient Truth

I have now seen An Inconvenient Truth the movie featuring former Vice President Albert Gore. When he displayed the deservedly famous “Earthrise” photograph, I recognized it immediately. The Apollo 8 mission to lunar orbit in December 1968 was one of the most exciting events of my teenage years.

Gore pointed out that this classic image had captured the imagination of the whole world, which had never been seen in this way before. People began to understand in a more visceral way that we existed on a single planet, a planet both more beautiful and perhaps more fragile than anyone had realized before.

The case for human-caused global warming has been growing year by year, even as the carbon-dioxide graphs climb ever higher. The ranks of the skeptics have been melting away like the polar ice as the evidence accumulated, till now the only persistent naysayers are the stubbornly ignorant (many blinkered by political ideology), the professional shills (paid lobbyists and industry-affiliated scientists), and a handful of willful mavericks (there's a few in every crowd: when they lead a revolution, they are visionaries; when they obsessively fight against a growing consensus, they are usually reduced to cranks).

I listened attentively throughout An Inconvenient Truth and consider it to be an extremely effectively polemic. The amount of detail was at an appropriate level for general audiences, with Gore avoiding the unnecessarily arcane while still providing the key scientific data that reveal the growing global crisis. His traveling slide show, as captured on the movie screen and augmented by the film's website at www.climatecrisis.net, lays out the case in a relentless and persuasive fashion. It increasingly appears that the earth's greatest ecological catastrophe may have been the stolen presidential election of 2000. We have unregenerate oil men in the White House at the worst possible time.

In the entire movie, there was only one moment, quite early in the screening, when I caught the former vice president in an error. And now it can be told, Al Gore's big mistake: he made an error concerning the moon.

While he was describing the circumstances under which the “Earthrise” photo was snapped, Gore talked about the tension everyone experienced when Apollo 8 ducked behind the moon in preparation for the braking maneuver that would put it in lunar orbit. The astronauts would fire the rocket of their spacecraft's service module while out of radio contact with the earth, traveling over the far side of the moon. A mishap could have caused an impact on the moon's surface. Gore used the common misnomer “dark side” for the far side of the moon. In reality, the far side gets every bit as much sun as the near side. The “dark side” can be any side of the moon, including the front side (from our perspective), which is actually what occurs at every new moon, when “dark” and “near” coincide.

I did a little double-checking to see whether Gore might have been correct after all. Apollo 8's lunar orbit insertion occurred early in the morning (U.S. time) of December 24, 1968. It was only about four days after the new moon, so most of the front face of the moon was dark and most of the far face was lit. The far side was not very dark at all.

And that, ladies & gentlemen & others, is what Al Gore got wrong. That's it. Were you hoping for something more egregious? I am truly sorry to have disappointed you. An Inconvenient Truth is brimming with truth, and it is very inconvenient indeed. Go see it.
Posted by Zeno at 3:00 PM

Europeans didn't call Africa the "dark continent" because there was no sun there, or because the people in Africa had darker skin than most Europeans. They called it dark because it had not yet been mapped and explored.

This usage of dark is still current, as in dark matter or dark energy, referring not to a lack of illumination, but rather to our ignorance.

By the time Apollo 8 traveled to the moon at the end of 1968, the Lunar Orbiter series of spacecraft had mapped the entire moon in detail. The National Geographic Society even issued a map of both lunar hemispheres in preparation for the Apollo 11 moon landing mission. (Titled The Earth's Moon, a copy of it hung on the wall of Lou Grant's office in the stage set for The Mary Tyler Moore Show. It's in the background of most of Ed Asner's office scenes. My copy of the map bears a 1969 copyright.)

Certainly “dark” can be used metaphorically, and the reference to Africa as the “dark continent” is right on the mark as an illustration. However, it's clear that many (and probably most) of the people who say “dark side of the moon” are not using it metaphorically at all. They think the far side is actually dark and are surprised when you tell them, “All parts of the moon get essentially the same amount of sunlight.” They wouldn't be surprised if they were intentionally using it in the sense you suggested. The far side of the moon is not the dark side in the literal sense and has not been dark in the metaphorical sense for many decades. The idiom or the error (depending on who is saying it) deserves to be banished.

There's also the "dark side" of the moon in terms of radio darkness, which is exactly the far side of the moon -- but I would guess that few people would use this meaning without a clear contextual indication that that was what they meant.

I can't believe the lengths apologists will go to cover a "pseudo scientist"/"internet inventor" pushing an agenda. I remember seeing the "inconvenient truth" and wondering how he expected anyone to believe he knew what he was talking about with that "dark side" comment.

Gore's poor credibility does more to hurt the climate change argument than help.

I can't believe the lengths some people will go to repeat the inane "Gore said he invented the Internet" smear. Trotting out that discredited canard does little to enhance one's credibility.