The Davis campus of the University of California is one of the largest of the nine general campuses of the state's premier public university, both in area (5,300 acres) and enrollment (30,000 students). Founded in 1905 as the University Farm, an agricultural satellite of UC's flagship campus in Berkeley, UC Davis became a full-fledged educational institution in the 1950s and today awards more degrees in the biological sciences than any other institution in the United States.

One of my younger colleagues is a recent UC Davis graduate in mathematics and math education. He advised me that some of his erstwhile classmates and mentor teachers were participating in a spring symposium to present a progress report on a National Science Foundation research project. The topic was collaborative classroom-based inquiry in K-12 schools. My curiosity piqued, I traveled along Interstate-80 to the university to see what our fellow educators had in store for us. It was worth it.

Naturally I paid a lot of attention to the results of the math participants, who are trying to raise algebra success levels above the traditional (but extremely disappointing) 50% level. One of their more interesting results was that students love to have teachers give them “practice exams” before a test, but that such rehearsal tests have no significant impact on student performance on the real thing. Although topic-specific worksheets were more effective in raising student scores, the students themselves continued to be much enamored of the practice exam. I'll be curious to see what other details the teacher-researchers come up with next year after the third and final year of the NSF-sponsored investigation. 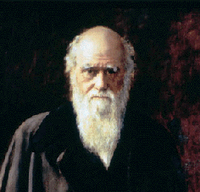 It stood to reason that there would be a major biological component to an education research project based at the old University Farm, and we were not disappointed. I pricked up my ears when I heard the title of the biology teachers' presentation: Facilitating student understanding of evolution through the synthesis of Darwinian arguments. It must be nice to be in California! Although there is a localized creationist infestation in Roseville, only about 35 miles away, at least UC Davis doesn't have to worry about an ID-obsessed state board of education or creationist pressures from its Board of Regents.

The biology component of the NSF project was conducted by teachers at Dixon High School, a rural secondary institution just a few miles from Davis. The two instructors had a heterogeneous student population in grades 9 through 12. They were particularly concerned by the low level of scientific literacy manifested by their students and hoped to inculcate principles of “scientific argumentation,” which they described as “supporting conclusions with evidence,” as opposed to bald assertion or appeals to authority. The teachers knew that evolution is often poorly understood by their students and they had designed lessons for a four-week unit devoted to scientific argumentation about biological change.

The teachers explained to us that at each stage during the evolution unit they gradually withdrew more of the supporting components of the lessons, giving them an opportunity to judge the degree to which the students were generating the arguments themselves or just following a template. The first two lessons (lizards and Galapagos tortoises) were complete with a model of the components of Darwinian natural selection, reiterated instruction on modes of argumentation, and repeated opportunities to synthesize Darwinian arguments based on authentic observations of biological change. The Darwinian model was reviewed during the third lesson (polar bears), but no example model was given. During the lesson on pigeons, which was given during the fourth and final week, the students were on their own, relying on their earlier work.

The students produced and submitted written arguments to their instructors for each lesson. The teachers subjected the arguments to an evaluation rubric that judged the arguments on their quality (sketchy vs. elaborate) and logic (consistent vs. inconsistent), as well as compatibility with recognized biological principles. To no one's surprise, the teachers discovered that most students have trouble providing evidence for their conclusions. However, the lessons were successful in fostering improvement in the students' argumentation skills. At the end of the four-week curriculum, 57% of the students were writing arguments compatible with principles of natural selection (versus only 30% at the mid-point) and their arguments became both more elaborate (detailed) and higher in quality.

The teachers gave a PowerPoint presentation from which I drew most of the items in this post, as well as a printed abstract containing the following lines:

At the end, though, many students still did not grasp the essential notion of evolution. As one teacher-researcher told symposium attendees, several high-schoolers continued to confuse Darwin's idea of natural selection with Lamarck's idea of acquired characteristics. Given the trouble that most adults have with evolution, it's actually encouraging that the high school students did as well as they did. The teachers already have some ideas on refinements to their curriculum, which they'll be testing during the next academic year. I have but little doubt that at some point there will be publications in education journals on the Dixon High School investigations. I'll keep my eyes open for the announcement of the symposium that I expect to mark the end of the NSF research project next spring, probably near the end of May. It should be worth attending.

Note: Educators who are interested in finding out more concerning the Collaborative Classroom-Based Inquiry Project should contact the UC Davis School of Education. The principal investigator is science education professor Cynthia Passmore.
Posted by Zeno at 7:00 PM