My family is awash in Old World superstitions. My late maternal grandmother was almost certainly one of those “old wives” famous for spreading their tales. She lived in a scary world full of occult phenomena, motivated by her fears to clutch ever more tightly the rosary beads that kept evil at bay.

I'm not sure how the family penchant for superstition and religion (is there any difference?) passed me by. Somehow I ended up with a decidedly skeptical view of my childhood faith (see Axiomatic Catholicism) and a jaundiced eye for anything my grandmother espoused. She knew, for example, how to look in the eyes of an expectant mother and predict the sex of the offspring. This technique worked without fail—fifty percent of the time. Naturally, every success was tallied as a hit and every failure was dismissed as a fluke (not really a miss, mind you, because something had obviously gone wrong; those don't count).

The believer's ability to selectively filter out disconfirming evidence is a recognized trait that preserves the believer's world view. The skeptic tries to be on guard against this kind of cherry-picking of the data. However, we skeptics are vulnerable to the charge that we have difficulty being the neutral observers that we claim (or strive) to be. After all, it's not easy to see things as they are rather than as they appear to be. Believers may accuse us of resorting to facile explanations of mysterious phenomena, being reluctant as we often are to leave anything unresolved or unknown. We're spoilsports. Believers report amazing things that they insist are evidence of the supernatural, but we refuse to believe them. We dismiss their supposed miracles.

I may be an usual skeptic in that I have twice witnessed miracles. Both were stunning at the time of their occurrence. I had that shivery feeling that one gets when confronting the inexplicable. Although “inexplicable” turned out to be a misnomer (both of the stories have explanations I will soon recount), I can still recapture in my memory those long seconds of profound bewilderment and disorientation. Perhaps I brushed up against the ineffable sensation that is the believer's constant companion. My grandmother lived in a world where literally anything could happen. I wonder in retrospect why the old girl wasn't even crazier than she was. I don't think my own nerves could handle immersion in that world. 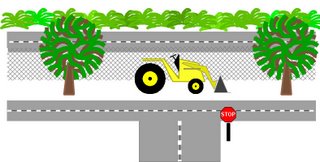 One morning I started off for work. In those days, my usual route was along the Interstate 80 frontage road until I reached an on-ramp to the freeway. I approached the frontage road via a street that ended in a T-intersection with the road. On this particular morning, perhaps a quarter of a mile ahead of me, I saw a yellow tractor next to the chain-link fence that separated the interstate from the frontage road. Its operator was obviously engaged in some early-morning maintenance of the shoulder. I didn't watch the tractor, looking instead to the sides for other traffic. I looked forward again as I reached the stop sign at the T-intersection and the tractor had vanished.

I was nonplussed, pausing at the stop sign while I looked again in both directions. No tractor. I could see much too far for the tractor to have sped out of sight. I looked again straight ahead, where the tractor had been. The trees that lined the frontage road were right up against the chain-link fence. There was no room for the tractor to have ducked behind one of them and their foliage was too high above the ground to conceal a tractor anyway. I was completely at a loss and felt a sudden chill.

As I finally made my turn onto the frontage road and pondered the weird vanishing act I had just witnessed, I wondered whether I had actually seen the tractor in the first place. I didn't really doubt that it had been there, but it made more sense to me that I had had a momentary delusion than that a tractor had suddenly disappeared into the proverbial thin air. The best explanation seemed to be that I had hallucinated, as unlikely as that explanation might be.

I looked into the rear-view mirror. There was the tractor. It was behind one of the trees. Upon first spotting the tractor that morning, I had mistakenly thought that it was working on the shoulder of the frontage road. The tractor had actually been working the shoulder of the interstate, which was high enough to permit a tree to screen it from an observer on the frontage road. It had not been in front of the chain-link fence, it was behind it. My initial glance had been at a sufficient distance that its location was unclear. I had unthinkingly jumped to a conclusion. Since my attention was directed elsewhere, that conclusion was merely filed away in my brain and not examined. As a result, I had created a mental image of the situation that was incorrect and primed to release an explosion of confusion when it collided with reality.

Had I not caught sight of the tractor again before I got out of range to see it, I would still be wondering what happened that morning. This incident occurred about twenty years ago, so presumably by now I would have concluded that it was some aberration, still unexplained, in my brain. Had I been of a more superstitious turn of mind, I might be entertaining even weirder explanations and writing to the Fortean Society about the space singularity that had swallowed up an entire tractor before my very eyes.

My second Interstate 80 miracle occurred one evening as I approached an off ramp I was planning to take. A dark car well ahead of me was blinking its right tail light as it took that same exit. Its other tail light was a dim red spark, difficult to see in the dark from the distance at which I was following. 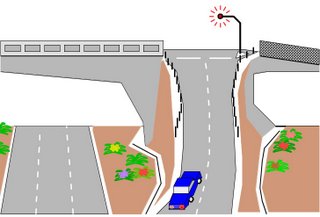 The exit ramp in question leads to an overpass that crosses the interstate. You therefore have to drive up the ramp until you reach a T-intersection near the top of the overpass. As the car ahead of me began to climb the ramp, I looked away for a few seconds. I don't recall specifically what I was doing. Perhaps I checked the rear-view mirror. Perhaps I was keeping an eye on a car in an adjacent lane. Whatever drew my attention lasted only a little while. I looked back toward the off ramp I was approaching and was shocked to see that the car ahead of me had reached the top of the ramp and had continued up into the sky! There was its blinking red tail light, well above the road bed.

This miracle unraveled more quickly than the incident with the vanishing tractor. In the seconds it took me to reach the exit, I calmed down as I noticed several things: (a) the blinking red light did not seem to be moving; (b) there was a car traversing the overpass, which could be the one I thought had risen into the sky; (c) a pole emerged from the darkness, showing me that the blinking red light was a suspended traffic signal.

Although I had used that same exit many times before, the perfect convergence of several factors had combined to give me an apparently miraculous experience. I was not accustomed to using the exit after dark and seeing the stop-and-go red light. I had looked away just long enough for the leading car to make its turn at the top of the ramp and momentarily vanish from my sight. The car's weak left tail light had made it easy for me to identify its brightly blinking companion with the lone traffic light. The blinking rates of the two lights were close enough to reinforce the illusion that they were the same light.

Everything made perfectly good sense—after those disorienting few seconds.

Does it mean anything?

As with the tale of the vanishing tractor, the story of the flying car is an example of the kind of observation that can either unsettle one's world view (such as mine, which is decidedly non-mystical) or, perhaps, confirm it. If you don't think the universe is organized along rational lines, then anything goes and nothing should really surprise you. There could be some entertainment value in that, but I would not welcome such a wacky world.

If I were a UFO enthusiast (by which I mean those people who think unidentified flying objects are vehicles piloted by anally-fixated extraterrestrials), I could fit the flying car incident quite neatly into my belief system. In fact, I could have ended up as a minor celebrity at various saucer conventions, oozing completely genuine sincerity as I repeat once again the story of the time when I spotted an alien piloting his disguised vehicle into the sky, no doubt to a rendezvous with the mother ship. (But why did it need a freeway ramp to achieve lift-off? Another puzzle!)

Of course, I know what really happened because the evidence dropped into my lap. Had I not taken that exit and instead driven on by, I might not have figured it out. Nevertheless, I was hardly likely to send a frantic report to MUFON (the Mutual UFO Network) about my sighting. Skepticism is something I take seriously. It would take something more compelling than a confusing incident to make me set it all aside and embrace some radical explanation. The skeptic is thoughtful and tries to regard things calmly and rationally—at least eventually, if not in the fever of the moment. A skeptic doesn't claim to know everything, but most of us like to think that the universe can be understood. And we rely on science, not on the occult. As for the bizarre events that may fall into your lives, as twice they did into mine, we have a way to approach those things, too:

Ah, you mention the Fortians! What do you think, are they keeping Mr. Forts sense of humour, or have they been led astray?