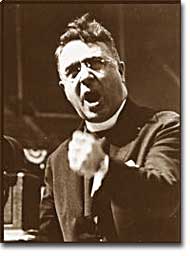 “I suppose you study a lot of awful learned books now.”

I caught D. James Kennedy in full Elmer Gantry mode on the radio last week. He's always a good one for pulpit pedantry. Gifted with a smooth manner and a glibness that few other preachers can match, Dr. Kennedy never fails to leave his admirers sopping wet in the deluge of his erudition. His topic was Evidence for the Miraculous, a lengthy discourse on the evils of atheism and one of several installments in his Skeptics Answered series (available on cassette or compact disc for those who could stand to sit through it more than once).

D. James Kennedy, A.B., M.Div., D.Sac.Lit., Ph.D., Litt.D., D.Sac.Theol., D. Humane Let., as he styles himself in the credits at the end of each Truths that Transform television program, is a Presbyterian minister in Fort Lauderdale whose Coral Ridge Ministries include such political lobbying groups as the Center for Reclaiming America for Christ and the Center for Christian Statesmanship. Kennedy has honored a series of politicians who match his criteria for statesmanship; in 2002 the recipient of the Distinguished Christian Statesman of the Year Award was Representative Tom DeLay, who was still a few years away from his indictment and resignation. That tells you just about all you need to know about the political bent of D. James Kennedy.

Dr. Kennedy explained in Evidence for the Miraculous that he was by no means a biblical literalist. Always the showman, he was sure that such a statement would agitate the many jot-and-tittle KJV idolators in his congregation. Kennedy hastened to reassure them: He was no biblical literalist because the Bible is replete with figurative language, which should, of course, be taken figuratively. As his listeners sighed in relief, Kennedy unleashed the flood waters of his learnèdness:

I think that's enough, don't you? Kennedy actually warmed to the topic a bit further and tossed in epitrope and prolepsis, plus a couple of others he pronounced so clumsily (his glibness momentarily failing him) I couldn't transcribe them, even after listening more times than I care to confess. Kennedy followed up with some sniping at Carl Sagan's lack of faith, a favorite topic with Kennedy.

One can always rely on Truths that Transform to provide a cavalcade of every hoary argument against evolution, the Big Bang, the great age of the earth, and every other scientific discovery that runs afoul of biblical literalism. Sure, Kennedy may not be a literalist, but he's close enough for all creationist purposes. He finds no figurative language in Genesis. As you would expect, he patiently explains to his congregation that probability shows evolution to be impossible (he cites Fred Hoyle, of course). He argues that Noah's flood is responsible for the geologic strata. And on and on.

D. James Kennedy is like unto his creationist brethren in other ways, too. He and falsehood are bosom buddies. 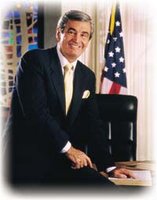 I am agnostic on the question of whether Dr. Kennedy is a conscious liar. It's possible he has rationalized that the occasional misrepresentation is good for the souls of his congregants, but it's just as possible he has managed to deceive even himself. The Julian Huxley case, however, is difficult to consider as anything other than a blatant falsehood.

I almost fell out of my chair. A public television interviewer had just asked Sir Julian Huxley, a leading defender of evolution until his death in 1975, why he thought Darwin’s idea caught on so quickly. His answer astonished me.

“[I suppose the reason] we all jumped at the Origin [Darwin’s On the Origin of Species],” Huxley said, “was because the idea of God interfered with our sexual mores.” “Mores,” of course, is a secular term for morals.

These are the first two paragraphs of a commentary written by Dr. Kennedy for the May 2004 issue of his Impact newsletter. (By the way, a few paragraphs later he invokes Hoyle again.) Kennedy's account is personalized with details that cause the reader to assume that it is an account of a vivid personal experience. The tiny problem with this story is that no such statement by Julian Huxley has ever been documented. It seems unlikely that Kennedy was the only person in America to have seen this public television interview of Huxley. But no one else did. Nor has any such interview been uncovered in the archives of the BBC or PBS.

Kennedy did not tell the Huxley story for the first or only time in the pages of Impact, he also recounted it on Truths that Transform (as I most vividly recall). His misrepresentation of Sir Julian's views go back at least to the 1980 publication of Kennedy's Why I Believe. Edward T. Babinski called him on it and asked for documentation of the claim. As Babinski puts it, instead of Kennedy's people giving him a proper answer, “they piled lie upon lie....” See also the discussion at Evolution Blog or check out Julie's story (“They gave me four more references for this supposed Huxley quote, and they were all bogus.”) on Joe Bageant's website.

Do you remember the words of Judge Jones in the Kitzmiller decision? He wrote, “It is ironic that several of these individuals, who so staunchly and proudly touted their religious convictions in public, would time and again lie to cover their tracks and disguise the real purpose behind the ID Policy.” Some extremely religious people consider themselves exempt from the directives of their own religion when it comes to dealing with others. The remarks by D. James Kennedy concerning Julian Huxley suggest that he may be in that same category.
Posted by Zeno at 5:26 PM

Zeno,
I'm the "Julie" you refered to in this text. The supposed Julius Huxley quote actually appears in a book by Erwin W. Lutzer, Exploding the Myths that Could Destroy America (Moody Bible Institute Press, 1986). The book is out of print, but I managed to get a copy of it. Although the book is full of footnote references, none is given for this Huxley incident. I researched this quote for years and finally gave up. I'm convinced Huxley never said it, but disproving something like this is difficult. I saved all the emails I sent and received from Lutzer's and Kennedy's minions, and would be happy to share them with you, or anyone else who would like to take up this cause. I'm really anxious in getting my research on the web as much as possible, and I don't really have an outlet to do that (no web site). Ed Babinski helped a lot in his essay about this quote. At the risk of receiving spam up the ying yang (which I already do, but it's easy enough to delete), my email address is puddinhead@hotmail.com. Anyone interested in the work I've done on this quote is welcome to email me. I'm not a famous author or anything--just a 47-year-old frump who thinks D. James Kennedy is a liar and needs to be taken to task for it.

I think D. James Kennedy is well aware that he tells lies. He has to be. He tells so many. You should hear him talk about the deathbed conversions of famous non-Christians. Thomas Paine, Charles Darwin, Voltaire--just about all of them. Most of these have long been debunked, but not for Kennedy.

You should hear his Columbus Day sermon. He makes Columbus out to be some sort of evangelical saint. In his sermon, he says something like, "So, when Columbus landed on this island, did he name it 'Gold Country'? Did he call it 'Columbus Island'? No! He called it 'San Salvador'--or 'Holy Savior'!" This is part of his attempt to "bring America back to Christ."

I emailed him and asked why he didn't mention that Columbus then enslaved the natives and made them work themselves to death mining for gold. And how Columbus said in his diary that the natives were so easy to enslave.

Kennedy also treats David Barton's bogus quotes as if they were actually said. Barton is the head of Wall Builders (a Christian organization trying to prove America should be a Christian nation) and has actually been forced to come clean on several of his bogus quotes of our Founding Fathers. He has known deists espousing the wonders of Jesus Christ and the miracles of God--usually somehow incorporated into the birth of our nation. Kennedy repeats these quotes again and again.

Incidently, I read the trial transcripts of the Dover, Pennsylvania case (they're on line). It took me a while, but it was well worth the read. The defense lied their asses off in that trial. And it was so obvious. The judge did a great job. He was such a gentleman throughout the trial. I understand he's a Bush-appointed conservative Christian. That must have really hurt the Creationists. Maybe they'll lie low for a while, but don't count on it. I'm sure they're just regrouping. Whether or not they lie low, one thing's for sure--they'll keep lying.