He said, she said, they said

The world is not waiting with bated breath for me to weigh in on the rape accusations against members of the Duke University lacrosse team. I'm not even all that sure what lacrosse is. Some kind of sport, I figure, what with there being a team involved and all. Although I am not given to following tabloid news (by which I mean the National Enquirer, the Weekly World News, Fox News, or other similar purveyors of the fanciful, fantastic, and sensational), the Duke University story has a familiar aspect I do find interesting. How is it that all these people—who were nowhere near the supposed events—know what happened? Beyond a reasonable doubt, you betcha.

I'm sure that I don't know. Defenders of the reportedly privileged white boys on the lacrosse team are quick to point out that the accuser is a prostitute. Are we to take the word of a sex worker as reliable? On the other hand, the members of the lacrosse team who hired a prostitute are johns. Should we believe the stories of guys who were hooking up with hookers? I marvel at those for whom the whole case is open and shut. No question!

Some of the blogs I frequent are generating a lot of words on this subject. For people who want a less hyperbolic treatment of the subject, I'd suggest the Duke story archives at Jeralyn Merritt's TalkLeft. While Jeralyn is pretty critical of the District Attorney who is pursuing the case, she provides all the coverage and links anyone could want to trace all aspects of the story. I also want to draw attention to Nick Barrowman's short piece at Log base 2, which is a useful example of how people can spin out completely invalid arguments (from ignorance, I charitably assume).

If I were to offer any advice (and I suppose I am about to), it would be to give it a rest. Unless you enjoy arguing from ignorance, leave the detailed commentary to people who have some knowledge about what's going on and the expertise to analyze the legal maneuvers and their meanings. All I want is for justice to be done, and right now I have almost no idea what that is. So I'll take my own advice and give it a rest.

While paging through The Essential Calvin and Hobbes this weekend, I was startled to run across a lacrosse-themed comic strip. It's just a peculiar coincidence, but what's better than a nice Calvin and Hobbes? 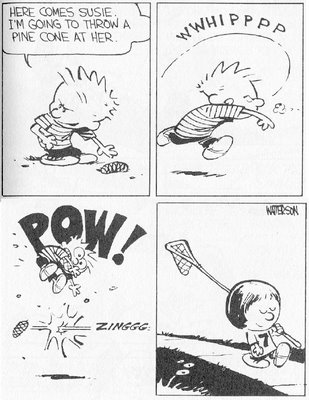