Just between you and I

You are never more likely to make a grammatical error than when correcting someone else's grammar. Call it “the Iron Law of Nitpicking,” if you will (or even if you won't). Its condign punishment rains down upon us know-it-alls who are always champing at the bit to help the less knowledgeable overcome their sad, sad ignorance. The Iron Law struck Dan Piraro this morning. 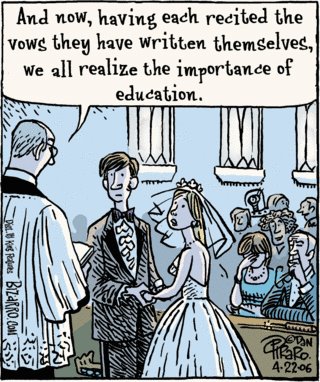 In his Bizarro cartoon panel for April 22, 2006, Piraro takes a worthwhile shot at couples who inflict their self-written wedding vows on their guests. Good for him! We would owe him a debt of gratitude if his poke in the ribs incited a stampede away from self-indulgent do-it-yourself vows. What is a wedding but participation in a traditional form of public commitment, which becomes less traditional the more people insist on mucking with it? Too bad that the folks most likely to benefit from Piraro's gentle barb are the least likely to realize he's talking about them.

I dare say that not many people will incorrectly interpret the intent of the language in Piraro's cartoon. You'll note that I used the adverb “obviously” to describe the implied connection between the participial phrase and the bridal couple. In perusing ordinary prose, the average reader would have sailed through such a sentence with full comprehension and no frisson of confusion at the subtle ambiguity. However, nitpickers are more alert to opportunities for correction. Nothing gets our noses up in the air more quickly than the scent of a nitpicker at work. We devour our own, we do.

Having spoken my piece, I will now return to my usual post, lurking in the background, waiting for the next opportunity to pounce. I, at least, am a very lucky person. As a college professor, I enjoy an occupation that provides a significant (and even socially constructive) outlet for my tendency to correct others. Even better, I teach math, where the answers are seldom subject to debate. My occasional forays into English territory are not supported by professional qualifications. Let's say it's more of a hobby. A very risky one.

In the present instance, it behooves me to keep this post short, thereby reducing the likelihood that I will commit some egregious error therein. When you, Dear Reader, find the inevitable faux pas, please try to be gentle as you denounce my sin in the comments. 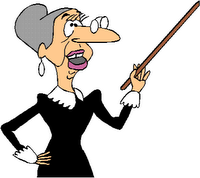 Update: Mark Liberman at Language Log took the above post as an opportunity to discuss the Bizarro cartoon in detail and my interpretation of it. He decided that Piraro probably made the grammatical error deliberately, with a nudge-nudge, wink-wink. I'm still inclined to think it was inadvertent. Go check out his article. Mark conducted a little poll among his readers and the latest results have 72% agreeing that “The cartoonist didn't understand that there is a linguistic problem in the caption.” Piraro himself, however, has not weighed in to clear the matter up.

To me, the most interesting part of the Language Log post was the history of what I called “the Iron Law of Nitpicking.” Thank goodness I was not so presumptuous as to call it “Zeno's Law,” as if I thought I had invented it. Mark runs through several previous incarnations, including a wonderful 1909 foreshadowing by Ambrose Bierce (wouldn't you know it?).

As for my making mistakes in the original post, two of my math colleagues quickly pointed out that I had misspelled a word (“themsleves,” already corrected) and used “therein” when “herein” would be more appropriate. (This second observation is echoed in the comment by attorney Neal Deesit, who notes that precision in legal documents would require the latter in preference to the former. Neal also reported the discussion on Language Log.) I caught the biggest mistake myself, one day after posting the original article: I gave the wrong month in citing the date of the Bizarro cartoon and made haste to correct it. (Mea maxima culpa.) Meanwhile, over at Language Log, Mark said that a number of his correspondents were concerned that I used the word “referent” in a casual way (as “the thing to which a reference was made”) at odds with the formal grammatical usage (”the thing that makes a reference to something else”). To that charge, I must plead guilty (as well as ignorance).
Posted by Zeno at 8:00 AM

A habitual reader of Bizarro, I noticed the dangling participle in the balloon in the April 22 cartoon.

My first thought was that Piraro had made a grammatical error. But on reflection, I considered that perhaps he might have been illustrating the Iron Law of Nitpicking by showing the minister himself making a grammatical error while criticizing the language of the couple's do-it-yourself vows and preaching the importance of education.

And now for your own condign criticism.

In your ultimate paragraph, you write that you must keep your post short to reduce "the likelihood that I will commit some egregious error therein."

As an attorney, the Iron Lawyer of Nitpicking, if you will, I must point out that the proper word for textual self-reference is "herein," which word is both mentioned and used herein. By using "therein" in your post to refer to itself, you sinned therein. Go and sin no more hereafter.

A referent is indeed what is referred to, but in semantics and semiotics, it's specifically the thing behind the word (i.e. the thing to which the word – usually a substantive – as symbol refers, in a symbolic "reference" relationship):

Mark's definition of "referent" is a little unclear, so perhaps we can give him the benefit of the doubt.

In any event, the broader definition of "thing to which something else refers" is certainly not incorrect, and so your own use of "referent" is neither wrong nor a reversal of the semantics and semiotics usage.