A sip from the firehose 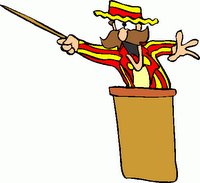 I was pretty pleased with myself. Dick Cheney had chosen to break his silence on the notorious hunting accident in Texas by speaking to Brit Hume on Fox News. It occurred to me that Hume was no stranger to speaking fluff to power. I had the evidence in my archives. (“Archives”: A fancy word for a cluttered home.) Brit's work as an apologist was in the pages of old computer club magazines from the 1980s that I had saved for no discernible good reason. I dug out the publications, found the articles, and drafted a blog post containing some juicy quotes from Hume himself. I uploaded my article and waited confidently for surfers of the blogosphere to stampede to my virtual door. 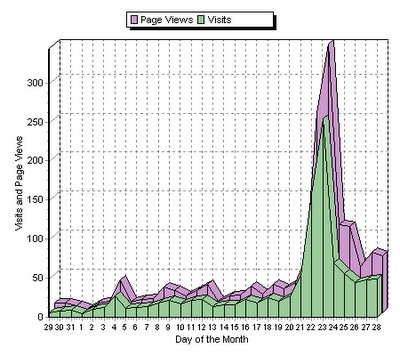 My numbers soared into the stratosphere. Thanks to Site Meter, I watched as the daily hits on Halfway There skyrocketed from the teens and twenties to nearly 250! However, it had nothing to do with Brit. People were actually showing up to read about a dreadful bit of poetry I had heard on Catholic Radio. I had mentioned it in a comment on Pharyngula, a favorite science blog that I visit daily. The initial flood of visitors was powered by the Pharyngula connection. Then came Wave 2.

A discussion on reproductive rights over at Bitch Ph.D. had prompted me to comment on something else I had heard on Catholic Radio and written up with the catchy title Why do you feel bad, whore? Dr. B's readers followed on the heels of the Pharyngulans and boosted my blog the rest of the way into orbit. For a couple of days the traffic was stunning (relative to where I had been before). It has since fallen back to a more modest level, although still about twice as much as I had had before.

Since the February stampede, I have been mulling over how I turned into a snarky commentator on the peccadilloes of Catholic Radio rather than an intrepid reporter on the failings of Brit Hume at Fox News. One possible explanation is that everyone already knows that the folks at Fox News are less reporters than they are shills for the Bush league. No one needs to hear that again. But the likelier explanation is that it all depends on where you tell your story rather than what your story is. Pharyngula and Bitch Ph.D. are high-traffic blogs with tons of good stuff to read—in terms of both original posts and the many comments they elicit. Perhaps if I posted a link in comments over at Fafblog, I would see if I get some traffic as wacky as me.

Halfway There is only a hobby with perhaps some therapeutic overtones. I used to write a lot for publication and this blog is a convenient outlet for some of the ideas that clutter up my brain. There are no ads, so I'm not looking for traffic for its own sake. I'd like more comments, I think, but the blog exists for its own sake rather than for any special purpose. I won't be making a big production trying to get those numbers up again. I did, however, learn to appreciate the information captured by Site Meter (I have a regular reader in Iceland!) and for a while I was visiting it frequently and reading the entrails. Here are a few other things I learned:

Pin-ups are popular. (Who knew?) When I included an image of Nikki Zeno as a joke in my post on Zenos in history, I discovered that some people were directed to my site by search engines that had recorded the picture's presence. One of my friends said he was hoping there would be more pin-ups. (Don't hold your breath, Gene.)

Another person came to Halfway There because of a Google hit on “boys in white shorts”; that visitor was undoubtedly disappointed to discover an article in which I complained about the color-coded P.E. shorts we were required to use in my high school days. No sexy pictures, but I did use a clip from Calvin and Hobbes.

Some anonymous user at the IP address 71.142.247.# (Site Meter shows a location that appears to be in Kansas) visits compulsively multiple times every day. Since I don't post more often than every few days, that seems strange. I wonder if it's a netbot that scans a gazillion sites every day for some search engine. Does anyone know?

Site Meter says that Halfway There has had more than 2,200 visitors. Just one day like the February rush would push the numbers over 2,500, but instead the month of March will take a few leisurely days to reach that milestone. Or maybe I should go listen to Catholic Radio for another juicy tidbit.
Posted by Zeno at 2:21 PM

I enjoyed your post very much. The blog, Donkey Path, had a post about Cheney and got a lot of hits not because of Cheney but because it mentioned the Perazzi Brescia shotgun that Cheney used!