George W. Bush may be the biological son of George Herbert Walker Bush, but he is the political offspring of Richard Milhouse Nixon. While Richard Nixon was more experienced and sharper in intellect than George W., he is the perfect model for the current president in terms of hubris and miscalculation. Even after he was forced to resign from office, Nixon was able to declare that “When the president does it, that means it's not illegal.” (He said it during a 1977 interview with David Frost. See the video at Crooks and Liars.) He never learned.

President Bush and his advisors appear not to have learned anything from Nixon's example. The Republican Party's political operatives are doing their best to bind together the fate of the president with the fate of each G.O.P. candidate. The White House doesn't want anyone running away from the president. God forbid that any of them get elected to congress without being beholden to their beloved chief executive or by distancing themselves from his failed programs and policies. Party chairman Ken Mehlman says, “The President is seen universally as the face of the Republican Party.”

That's what the Republican candidates are afraid of. As Bush's poll numbers languish in the basement, G.O.P. hopefuls see their campaigns crippled by the president's unpopularity. They fear that the 2006 elections will turn out the same way as those in 1974. Both are midterm elections in the second term of Republican presidents accused of trampling the law and the Constitution. Nixon resigned a few months before the 1974 election, making it inevitable that the balloting would turn into a referendum on his conduct. If the same thing happens this year, with Bush's poll numbers competing with Nixon's for unpopularity (even without the benefit of a presidential resignation), a modern day political cartoonist might ink an hommage to Don Hesse's editorial cartoon (Aftermath of the Nixon Years) in the St. Louis Globe-Democrat a few days after the election. That would be sweet. 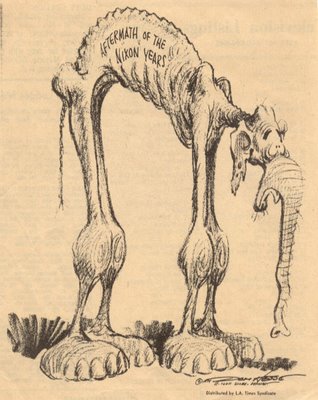 Interesting, not entirely taken in context, but, none-the-less I do thank you for the kind remarks regarding my father's cartoon.
Jan Hesse Erdmann