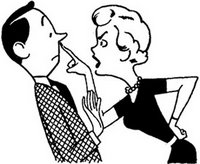 Would I have the balls for it?

Many years ago my friend Elaine and I were swapping tales from our childhood, sitting in her Greenwich Village apartment and comparing notes. She was raised in a semi-observant Jewish family and joked that she would title her autobiography Eat the Pizza in the Living Room with the subtitle Because we're keeping the kitchen kosher. I was a cradle Catholic in whose family some mothers popped out an annual child while others mysteriously spaced them out. Both of our families seemed to appreciate the advantages of a cafeteria approach to religion.

Then Elaine hit me with the blockbuster. As a young girl, she had been taught a morning prayer:


Blessed art thou,
O Lord our God, King of the universe,
for having made me according to Your will.


Surely that is not an offensive prayer, is it? It depends on the context. This was the prayer for girls. Boys, however, were taught to pray a different prayer:


Blessed art thou,
O Lord our God, King of the universe,
for not having made me a woman.


Even though I was accustomed to the rock-ribbed patriarchy of Roman Catholicism, Elaine's recitation of these childhood prayers rocked me back on my heels. That moment crystallized for me—a somewhat inattentive male—how little I had grasped the inherently privileged position I had attained by the simple expedient of being born with XY chromosomes. Indeed, if I took the God notion more seriously, I should undoubtedly pray fervently each day, thanking Him for not having made me a woman. If He had, how could I avoid being furiously angry every moment of every day?

No doubt some people would be happy to explain to me that I misunderstood the prayers (tell that to Elaine, why don't you?) and the innocent intent behind them. Don't bother. I am quite familiar with the tortuous arguments of apologists, who can turn the egregious into the mundane, water into whine, and paternalism into solicitude. I was raised Catholic, remember?

This chain of recollection was stimulated by a recent flurry of letters in one of the regional newspapers I read. It all started, as it so often does, with a letter from a man who wanted to explain to women how to take responsibility for pregnancies. Men, as you know, are particularly good at explaining things to women. (As a childless bachelor, I am available to provide expert counseling on marital relations and child rearing. Cheap rates, too.) This particular man was at pains to explain his view of women's reproductive rights (although, for some reason, he felt that “rights” needed to be fenced in by quotation marks):

Sorry to be so ignorant (what'dya expect from a man), but I thought women always had reproductive rights that no law, court, government agency, etc., could ever take away. They have the “right” to decide whether or not to have children, if and when to get pregnant, when to have sex and with whom, whether to be married or not, choose whether to use birth control and what method (condoms, shields, spermacides, pills, etc.), or sexual abstinence and, even, to become surgically sterile.


See? It's simple! Girls who give in to pressure from their boyfriends merely forgot to “just say no”! Women whose contraceptive measures fail (for now, anyway, until we manage to outlaw contraception as a violation of God's plan for the universe) are just irresponsible for not having chosen more effective means—like surgical sterilization (at least until we ban it). And don't forget to say no to rapists, too. They'll understand. They're men.

I'm not exactly a sensitive New Age male (“New Age”—no, thank you!), but I find myself taking extreme offense at the obtuseness of some of my brethren. For years now I've wondered why all women aren't angry with us every minute of every day. That question is only partly rhetorical. I know moral outrage is difficult to sustain, even under severe provocation. (That's probably why Bush got a second term.)

A syllabus of horrors

While my consciousness is momentarily raised, before it slips back into a more tranquil state, I am moved to share a collection of miscellaneous items from my memory trove. Each item is well-attested, having occurred either in my presence or in the presence of a friend or colleague who witnessed it. Nothing in this little syllabus of horrors is a “friend of a friend” urban legend.
I won't make the mistake of denying the reality of progress. For example, the professors in the above list are all gone now, and the worst case (the “gates of hell” guy) flourished in the fifties and sixties; he wouldn't last long today, mercifully. What troubles me the most, however, is the degree to which the thoughtless assumptions of the past afflict those who should know better. The female counselor who routinely warns her female advisees away from math is particularly worrisome, as she appears to have bought into the idea that math and science are for boys, and girls shouldn't trouble their poor little brains over it. No wonder the women in my math department regard her with special horror.

Every polemic of this sort runs the risk of falling into the trap of excessive generalization. Who dares say how women should think and feel when we are talking about a group that includes such diverse elements as Phyllis Schlafly and Betty Friedan? (Actually, Schlafly would probably be happy to tell us, in no uncertain terms.) The point, though, is that the male-imposed burkah is less distant from our modern American society than we might like to think. Just read the letters to the editor or listen to the rantings of Rush if you don't believe me. And thus I wonder, why aren't women angry all the time?
Posted by Zeno at 8:46 AM

I think I love you for the "I am quite familiar with the tortuous arguments of apologists, who can turn the egregious into the mundane, water into whine, and paternalism into solicitude" line. I wrote a LiveJournal entry about gendered occupational streaming ("How to Choose a Career if You Don't Have a Penis"), and one of my commenters referred to modern instances thereof as "the Kinder, Gentler Sexism." It's not quite as egregious as the "gates of Hell" thing, but it'll still get you.