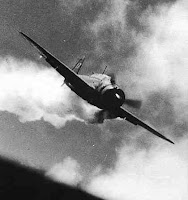 Your afterlife is wrong!

PBS has been rebroadcasting “The War,” the multi-part Ken Burns documentary on World War II. Last night I watched the final episode, “A World without War.” As its situation became more dire, Japan ramped up its use of suicide pilots—the infamous kamikaze. One survivor of a kamikaze attack was Maurice Bell of Mobile, Alabama, who was a sailor aboard the U.S.S. Indianapolis when a Japanese pilot crashed into the ship.

“They was trained to fly their planes one way and no return,” explained Bell. “And when they went out after a ship or something, they had their funeral before they actually left and they knew they was never coming back. They was under the impression that if they gave their life that way for their country they'd have a special place in heaven for them automatically—which wasn't true.”

Bell delivered that final phrase with an ironic emphasis, mocking the credulity of the kamikaze who was supposedly expecting to be ushered into paradise upon the completion of his mission. For some reason, the U.S. sailor seemed absolutely certain that the man who attacked his ship has not been enjoying the delights of a luxurious Shinto afterlife. I wonder: Does he similarly dismiss the dogma of a Christian afterlife?

"I got mittens, you got mittens, all god's chillun got mittens." With better spelling, that's "gott mit uns", the phrase popularized by the German military before and during WW II, meaning "God with us". They'd emblazon that slogan on their belt buckles, canteens, helmets, and anywhere else, I suppose, that might shore up a soldier's confidence.

My point in relation to your perceptive post is that only a fool would go to war thinking that their god was not with them. How stupid would that be? And you're right, at memorial services for Christian soldiers, reference is typically made to the dead having gone to "a better place" with Jesus, and so on. All god's chillun have their mythology.

And, again, we'd be crazy to go to war thinking that god might not be backing us up. Or, I wonder, when an Allied soldier saw that German belt buckle, did he perhaps pause momentarily and think "Holy crap, they didn't tell me that in boot camp!"

P.S. I forgot to say, I love the title of this post!

Zee, did you spot Dolores Greenslate (née Silva) of PHCS in one of the earlier episodes? Her mom had taken a pin-up swimsuit photo of her in the backyard to send to her then-boyfriend Norman Greenslate; also, she saw a film clip including him in a newsreel at the movie theater.

Indeed I did, Kathie. It was a very amusing scene.

Gene O'P: In keeping with your good-guys/bad-guys theme, check out this excellent clip from the British comedy team Mitchell & Webb:

Oh no, not Mitchell and Webb. They say things like "...if there's one thing we learned in the last thousand miles of retreat, it's that Russian agriculture is in dire need of mechanization." STOP!!!!

Plus, the YouTube black hole says there's 3640 results for Mitchell and Webb. Obviously, a lot of those are the same bits posted by different people, but it's going to take me days or weeks to get it straightened out.