I should get satellite radio. It might preserve my sanity while driving through the big red spot in the middle of California. The Highway 99 corridor down the middle of the San Joaquin valley is the stiff and unyielding backbone of right-wing political thought (or lack of thought) in the Golden State. Scanning the broadcast bands on the car radio is a claustrophobic venture into a very narrow spectrum of opinion. Whenever the undiluted real thing is unavailable, you never lack for a crowd of third-string talk-show loudmouths—wanna-be Limbaughs, Hannities, and Becks. It's an education in American exceptionalism, Judeo-Christian moral superiority, and my-country-(extreme-)right-or-wrong.

Time to fire up the CD player.

Perhaps you're thinking I should try the FM band instead. Surely it's the AM dial that is infested by such Neanderthal grunting. FM stations must be better. Right?

Sort of. There are fewer talk shows, but still plenty of country-western broadcasts and a handful of Golden-Oldie stations. It was while I was popping back and forth between talk and music that a coincidental juxtaposition gave me a small epiphany.

A talker was reprising an old rant about the superiority of Christian culture to Islamic. His evidence included the eagerness of Muslims to engage in honor killings, one chilling example involving the supposedly moderate founder of Bridges TV. As Reuters described it, Bridges was established “with a mission to show Muslims in a more positive light.” When Muzzammil Hassan beheaded his estranged wife, he did a very effective job of contradicting his broadcast company's message. (He seems to be an idiot as well as a murderer.)

The talk-show host stressed that such killings were the peculiar domain of non-Christian cultures, so all the more reason we should deport every last one. Westerners would never put up with this kind of thing.

Okay. Heard it before. I switched the radio to FM. I recognized the song being played. The Kingston Trio was singing its 1958 hit “Tom Dooley,” which got a lot of play in my childhood. Perhaps you know it:

Dooley is on his way to be hanged because he murdered his lover. The song is based on a real murder that occurred in North Carolina in 1866. She was seeing another man and Dooley was jealous.

Ancient history, of course. And we should make allowances for folk songs. It's not as though we were supposed to identify with Dooley and sympathize with him, right? (“Poor boy, you're bound to die.”) I switched to another music station. More oldies, but no more “Dooley.” An hour later, I got this instead:

Then I awake and look around me, at four gray walls that surround me
and I realize that I was only dreaming.
For there's a guard and there's a sad old padre—
arm in arm we'll walk at daybreak.
Again I touch the green, green grass of home.
Yes, they'll all come to see me in the shade of that old oak tree
as they lay me neath the green, green grass of home.

Time for more capital punishment, this time with Tom Jones. He was singing “Green, Green Grass of Home,” with which he had a hit in 1966. Okay, so he's on death row. We don't know, however, that he necessarily killed his girlfriend.

But Tom wasn't finished. The radio station then played his 1968 hit “Delilah.” (What was this, a Tom Jones festival?) It's a poignant love song in which the jilted lover stalks his former girlfriend and finds it necessary to kill her when she mocks him after her tryst with another man.

At break of day when that man drove away, I was waiting
I cross the street to her house and she opened the door
She stood there laughing
I felt the knife in my hand and she laughed no more

Well, she did laugh at him. And Delilah's killer is apparently remorseful—even as he demands an explanation from her corpse:

My, my, my Delilah
Why, why, why, Delilah?
So before they come to break down the door
Forgive me, Delilah, I just couldn't take any more

That really makes him a lot more sympathetic.

These examples prove nothing, of course. Western culture does not celebrate or empathize with killers in general or men who kill women in particular. Let us speak no more about it.

Besides, I want to listen to today's broadcast of Bizet's Carmen. 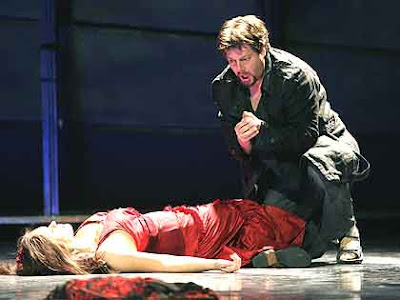 The BBC iPlayer conked out on me halfway through the second act.

I totally agree with the podcast idea - I listen to podcasts on my daily commute. EscapePod and Radiolab are a couple of my favs.

But my reason for commenting is that the depiction of an act of violence in a piece of art is not necessarily an endorsement of that behavior! Carmen was wrongfully killed.

There are sufficient examples from the news of men murdering their ex-wives and girlfriends - no need to refer to songs.

Well, while Don José may have been dragged away to justice, he's not presented as an insane monster, just subject to unbearable pressure, so while not exactly endorsed, certainly sympathised with.

But digging up creepy lyrics is fun, another 60s hit:
Well I'd rather see you dead, little girl
Than to be with another man

The difference is that "honor killings" in Muslim communities are often approved or even enforced by the killer's whole family and even the community. And they can be imposed not only for an act of sexual betrayal but even for disobeying one's father.

Anonymous: These are differences of degree, not of kind. It matters little who "owns" the woman and feels justified in killing or injuring or otherwise controlling her - it's all a continuum, and it's important to remember how recently (some) humans have stopped behaving this way.

The difference is that "honor killings" in Muslim communities are often approved or even enforced by the killer's whole family and even the community. And they can be imposed not only for an act of sexual betrayal but even for disobeying one's father.

Oh, and have the Christians stopped reading the Old Testament? Honor killings of children for disobeying the father is part of Christian religion, too. We just get to them young enough to tell them killing is wrong, before they take their holy book too seriously. The biggest difference between Christians and Muslims is extra-religious cultural influences.

But no, let's discuss how evil and backwards Muslims are.

In much the same way that Jesus suffered on the cross to redeem the sins of all Christians, Zeno suffers in San Joaquin Valley so atheists may giggle.

Ha, Llewelly! Highway 99 is indeed a kind of Via Dolorosa for the nonbeliever.

Yeah, podcasts are where its at. I listen to the Adam Carolla podcast, it's not always my kind of politics but I enjoy the humor, which is the focus.

I also listen to the NORML podcast and Ring of Fire and Randi Rhodes. There's a ton of awesome audio out there being made and most of i is free.

So never mind "honour killings," when are we going to start calling the neverending series of antisocial guys who kill their wives or girlfriends for having the temerity to leave them what it is -- a systematic campaign of terrorism aimed at enforcing social control over women? Between that and rape culture and the rigid codes of appearance ("attractiveness") men insist women conform to or face severe social penalties, the major difference between North American culture and a lot of Islamic cultures is that our clothing requirements are less restrictive. (That said, I'd be happy to be able to wear a veil without social censure in both high summer and deep winter; it gets both very cold and very hot where I live, and having a head-covering on would help mitigate that. I've actually worn veils before and they're quite comfortable.)

One thing western culture seems to have and Islamic culture doesn't is the food police. They may tell women exactly how they can dress and where they can go and everything, but they don't scrutinise every bite they put into their mouths, and scream social bloody murder about women who refuse to exist on the smallest, most disgusting portions of food possible. (They also don't seem to have cultural prohibitions about women taking up too much physical space, but I suspect they bypass that by simply restricting womens' access to public space even further than western culture does...)