Rejection is such sweet sorrow 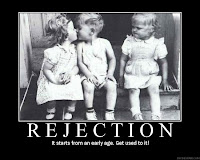 The art of the turn-down

Something weird happened last summer. I don't really have an explanation for it. Perhaps it's like what occurs to a super-saturated solution. Some seemingly imperceptible disturbance perturbs the solution and—zap!—it sudden crystallizes.

Anyway, something similar happened to me and—zap!—I became a novelist.

The notion had been kicking around in my head for years, goaded by various family members. We have dozens of stories in my extended clan. Happy stories, funny stories, sad stories, bizarre stories. All kinds of stories. (Some have appeared on this blog.) I'm sure this is true of all families, but my relatives are certain that our family's stories are more fascinating than most. Retellings of family legend and lore are often followed by a canonical couplet:

“Whoa! Someone really ought to write that down!”

“Yeah, but it would have to be as fiction! No one would believe it really happened!”

A seed was planted in my brain, watered regularly by family gatherings at which I'd hear that closing couplet after a raconteur's storytelling. A critical point of some sort was reached last summer and I wrote my family's story—with all of the names changed to protect the guilty. I became a novelist!

An unpublished one, that is.

After some dithering and some encouraging feedback from friends who read the manuscript, I shopped the novel around a little bit. I sent some sample pages to a big-time literary agent in San Francisco. After a few weeks, I got my first rejection notice. She doesn't want to represent me.

You might naturally assume that I was crushed upon reading the rejection notice. Actually, I was richly entertained.

Yes, I was disappointed. The disappointment, however, was mitigated by my enjoyment and appreciation of the rejection letter itself, which struck me as a masterpiece of its genre. Here's my favorite part:


[R]ejecting manuscripts that become successful books is a publishing tradition. Assume we are wrong. Persevere until your books reach the goals you set for them.

Isn't that splendid? I was breathless with appreciation. Surely she was talking to me and was admitting that my book was fated to be one of the successful books that she would someday rue having rejected!

I had not expected to laugh out loud at a rejection notice, but I did. Perhaps when I have the experience of more of them, I'll find that they are all similarly clever and the novelty will wear off.

I've certainly enjoyed your stories of your "extended clan", so I hope your novel reaches the exalted state of publishedness.

For my own part, I suspect I'm genetically doomed to turn out a certain kind of prose. I cranked out a novel-length block of something-or-other when I was in high school, and another during my undergraduacy. A few years after graduating college and starting to wander the Earth, I dusted off the old LaTeX document which held my science-fiction murder mystery, and I thought, "Hey, this isn't entirely beyond redemption."

I considered shopping it around to agents, but then I walked through the SF section of the local Barnes-and-Borders-a-Million. From the look of their shelves, the only way to get SF into an actual, physical store was to write a Star Wars, Star Trek or Halo tie-in. (My friend Joshua corrected me on this: "They also have Warhammer 40,000 novels!") So, I wrung out the worst of the story, sent the PDF through a print-on-demand service and got myself a nifty holiday gift for family and friends. The next book will be the one which makes me "notable" enough to qualify for Wikipedia.

(In a moment of "why not?", I did make it available for public sale; it's even picked up a couple Amazon reviews. The modern age is amazing — it's easier than ever before to grab an infinitesimal slice of fame!)

Were we separated at birth, Blake? I, too, wrote an sf novel in high school. (I wonder where that wad of paper is these days...)

You're right: There are lots of publication options these days. If I don't get a nibble from a mainstream publisher, I can try niche publishers that focus on specific markets (Portuguese Heritage Publications, anyone?). And if they don't bite, there's on-line options and POD. It'll get out there eventually.

The manuscript weighs in at 118,000 words right now and I wrote it without letting anyone in the family know I was working on it. My sister has now seen it and she was fascinated. (Now I need it read by someone who reads it simply as a novel -- not someone who knows me and the source material.) Fortunately, the family members most likely to take offense are dead, senile, or illiterate. And let us not forget that it's fiction!

(Now I have to go peek at your Amazon reviews.)

Perhaps it's like what occurs to a super-saturated solution. Some seemingly imperceptible disturbance perturbs the solution and—zap!—it sudden crystallizes.

Funny you should mention that. Just the other day my son showed me this video of "hot ice" using (as I understand it) a supersaturated aqueous solution of sodium acetate. I'm not too knowledgeable about chemistry, but the sudden crystallization is pretty cool!

Cool! Thanks for sharing, Nick. Fun with chemistry!

If it gets published, João, I will be sure to make it known. Perhaps it will need a translation into Portuguese!

I'd be honoured. And if you don't publish it, I would love to read it anyway.

Congratulations! I like books about human nature. Maybe you can make it available as a Lulu print-on-demand book.

Aargh, I love reading and I'm just itching to read it. Also, Blake's book is on my amazon wish list. Thirdly, I'm also writing a book, which I hope will be finished by the time I'm in High School.