Confessions of a blog whore

On Friday, November 23, 2007, the day after Thanksgiving, Site Meter got screwed up. Suddenly I was denied my regular fix of blog traffic data. I hadn't realized till then what an addict I was. On Monday afternoon, Site Meter was finally back. There was much rejoicing. 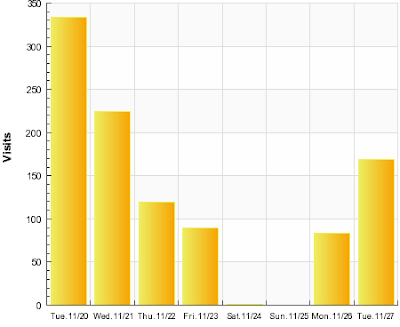 So what was the big deal? Halfway There is just a piddling little personal blog. It doesn't bring in any money (no PayPal contribution button or advertising) or any other goodies (no Amazon gift list link—maybe I should get me one of those). No, it's all about enjoying the traffic and browsing Site Meter's list of the geographical locations of my visitors. It's cool. Each new post brings a quick (albeit modest) surge of hit from people who have Halfway There picked up by their blog readers. How nice of them!

Of course, there is a natural consequence to my enjoyment of the passing parade of visitor: I can't resist pumping up the volume every so often. It's developed into a habit of leaving links to Halfway There in my comments on other blogs. Of course, I tell myself that the links are pertinent (they are!), but that's not saying much. After a couple of years, even my desultory posting rate has been enough to generate a few hundred items. That's a big enough collection to provide a suitable post for every occasion. Each time I add a comment to someone's blog, I can include a reference to some Halfway There post on a related topic. I noticed that I was starting to do it habitually. Overdoing it. 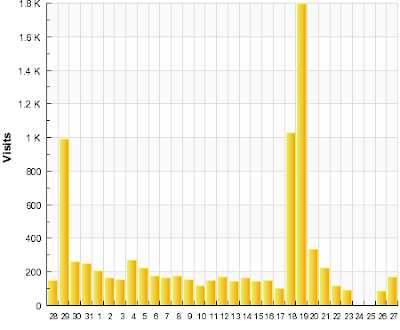 I'm not joining Blogwhores Anonymous (especially not if they include that nonsense about appealing to a “higher power”), but I probably should cut back a little. I won't quit cold turkey, of course, but the occasional link in comments should be okay. And every so often I submit something to Mike's Blog Round Up at Crooks and Liars (such as the one producing the big spike in my hit rate on November 19) or I pass along a link to PZ Myers at Pharyngula (who created the November 18 spike when he posted it at his site). I could never give up that kind of excitement. (Whee!)

Hey, maybe I'll go over to Site Meter now and see where my latest visitors came from!
Posted by Zeno at 10:30 PM

Of spikes in blog traffic, Abbie once said "it's like heroin...and when it's gone, you need more". That was in response to the link I got from PZ after Dembski's visit to OU (See, I can do it too!)

i got here from a whorish link on MyDD, but i'm everso glad, as you have an excellent blog!

ian (but a different ian from the one above)

I would have added you to my bookmarks, but it is already overflowing the screen and I read way too many blogs as it is, so I wait until I see one of your linked comments before checking in here. So please keep it up, and thanks.

i dont use any software to mapping site visitors.i found that all the software doesn.t give you real result.its my own thought.