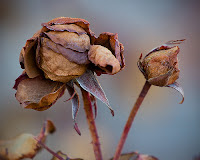 Too little, too late

The fellow on the phone wanted to interrupt my class, but he didn't want to be rude about it:

“Hi, Dr. Z. My wife is in your math class later this morning and I want to come by and give her some flowers, but I don't want to be disrespectful so I thought I'd ask your permission first.”

“Well, that's very considerate of you. What's the occasion?”

“It's our six-month anniversary.”

“Okay. I don't mind, but I'd prefer that you not interrupt the quiz that I'm giving during the first part of class.”

“How about half an hour into class?”

“Yeah, that would work fine. I'll see you then.”

Later that morning I gathered up my stuff and left the office for the classroom. I administered the quiz. Then the quiz problems went up on the board and we worked through each one carefully. Matters proceeded smoothly.

At about the half hour mark, a young man with a bouquet of red roses slipped in through the open door in the rear of the classroom. He crept up behind Dawn and fell to one knee. She didn't notice the murmuring that began to ripple through the back rows of the classroom. I decided to help out.

“Dawn, I think this would be a good time for you to turn around and look behind you.”

Her eyebrows went up, but she began to twist around in her seat. Her husband's presence startled her, but he wished her a happy anniversary and presented her with the flowers. The class was giddy with amusement, but Dawn did not seem to share its reaction. As a student of human behavior, I thought that Dawn was probably one of those people who prefer not to be the center of attention or to have a big fuss made over them. (Actually, I saw this on a recent episode of Reaper.) The class applauded cheerfully as Dawn's husband slipped back out of the room. I turned back to the board and resumed the day's lesson.

At the end of class, Dawn came up to talk to me.

“Dr. Z, I won't be able to attend our next class session.”

My lightning-quick mind guessed that she and her husband probably had some kind of mini-vacation planned, but I refrained from saying anything.

“Thanks for letting me know in advance, Dawn. I'm sorry you're going to miss class.”

“Yeah, me, too, but I have an appointment to file divorce papers.”

I probably looked quite startled for a moment.

“I'm very sorry to hear that, Dawn. Perhaps today's roses were a sign from your husband that he'd like a reconciliation.”

She grimaced a bit.

“If that's the case, he should have started a lot sooner.”
Posted by Zeno at 2:00 PM

She gave up after 6 months of marriage?

If you get married before age 25, that's about how long the relationship will last. 20-somethings don't know shit about relationships and they treat each other like shit.

No wonder she looked uncomfortable.

If you get married before age 25, that's about how long the relationship will last. 20-somethings don't know shit about relationships and they treat each other like shit.

That's quite a generalization - is it based on personal, anecdotal or statistical evidence?

She gave up after 6 months of marriage?

Better sooner than later, considering that it took me six months to even decide to finally walk out on an abusive, seven-year, committed relationship. I wasn't even married to the guy, although I was engaged.

In her case, "sooner" probably should have been "before the wedding," but OTOH, I can also see younger people getting caught up in the idea of Getting Married™, considering what a ridiculously big deal having a wedding is in North America. (They don't make much of sustaining the marriage after the wedding, but the wedding itself is indisputably a blown-out-of-proportion big deal.)