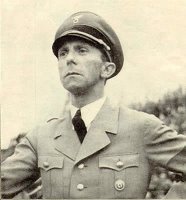 It's not the figures that lie

Right-wing radio talk-show host Melanie Morgan is trying her hand at a little journalism. When she's not ranting on San Francisco's KSFO, a bastion of neo-conservative cant in the Bay Area, she's heading up a couple of pressure groups (Move America Forward and the Censure Jimmy Carter campaign) or writing for WorldNetDaily. The latter is an on-line news journal whose relationship to reality is similar to that of The Onion, but it's not intentionally funny.

In her guise as an intrepid reporter, Morgan tenders up an amazing scoop—a story you'll never see on one of the responsible news outlets. She used her Move America Forward mailing list to send out a press release (and, no, she didn't forget to include a pitch for monetary contributions):

Move America Forward Chairman, Melanie Morgan, has broken a story that the mainstream media refuses to report: for the past several months the number of U.S. fatalities in Iraq has consistently fallen.

This blockbuster information is contained in this WorldNetDaily Exclusive column, “Separating the Men From the Boys”

While Morgan may be one of the least responsible radio voices out there, certainly this is welcome news. Is it too good to be true? What is Morgan's evidence for her startling claim? She adds just a little more detail in the actual column:

Does this information surprise you?

It should, because the mainstream media has done everything it can to paint Operation Iraqi Freedom as a failure. The progress that is made in rebuilding Iraq on a daily basis is seldom reported. 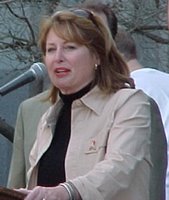 Okay, she didn't give any numbers, but there are specific claims in her article. The monthly death toll among U.S. troops in Iraq has been dropping since April. When we count May, June, July, and August, that's four straight months of declining death counts. Is Morgan misleading us?

Of course she is. Morgan is part of the Republican noise machine and a typical specimen of the right-wing propagandist. They lie bravely and boldly in the service of their ideology. The fig leaf covering Morgan's lie consists of the two words “so far” in describing the August body count. There were at least six days left to go in the month when she penned her column, which was published on-line on August 26, 2006. She had to trim off 20% or more of August in order to make her talking point stick and, sadly, it has already unraveled.

The website antiwar.com maintains a tally of fatalities in Iraq and Afghanistan (counting deaths among civilians and foreign troops as well as our own). I checked the monthly totals for U.S. troops yesterday, the day that Morgan's column came out. At that moment, her claim was barely true. U.S. casualties had spiked in April with a shocking death count of 76, after which the numbers slowly receded, till in July it was down to 44. As you can see, the August count was even lower, at 40 to date (and the date was August 26).

The moment I saw the actual count, I knew there was no way that we would be fortunate enough to make it the rest of the month without enduring enough American deaths to break the July numbers. After all, we are still losing our men and women at a rate that averages more than one a day. Does Morgan not know this? I dare say she does, but remember: her job is not news reporting, it's propaganda. A day later, and the August count had tied the July count. Lucky Melanie Morgan: she published her misleading column just in the nick of time!

Morgan brags in her column that tough gals like Ann Coulter and Laura Ingraham have to take up the slack left by the girlie-men reporters (she cites Tucker Carlson, an apt choice) in encouraging (fooling?) the American public to support the war. By the evidence of her latest WorldNetDaily column, Morgan has learned the first lesson of Coulterism: the blatant falsehood is your friend whenever the truth is against you.
Posted by Zeno at 2:30 PM