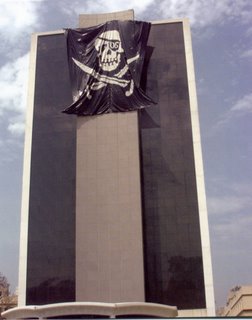 Caltech's Millikan Library continues to serve as the campus's tallest billboard (in addition to being its tallest building). This year the east side of the nine-story edifice was adorned with a Jolly Roger, the skull decorated with an “06” eyepatch.

The accompanying illustration was published in the new issue (Volume LXIX, No. 2) of Engineering & Science, Caltech's quarterly magazine for alumni and friends of the institute. As reported in the photographs' caption, “Besides flying their colors from Millikan Library, the pirate crew made the Gene Pool next to the Beckman Institute run red with blood in the form of FD&C Red Number 5.”

Back in 1973, Millikan was used to acknowledge a more specific pirate, who was then (but not for much longer) occupying the White House. Students from Dabney House used their mountaineering skills to dangle from ropes while affixing the wooden frame of their canvas sign to the side of the building. Quite a feat. The “Impeach Nixon” banner attracted wide attention, including an angry letter from the president of the National Oil Company, who said the prank was going to cost Caltech a million dollar contribution he had been planning to make. Campus opinion was mixed, but most of us thought the oil man was blowing smog. He could just as easily have written a letter saying he had decided against a two million dollar contribution. Words are cheap when they're not on a cashier's check.

The local coterie of college Republicans, in a tradition which survives to the current day, were gormless pudges unable to rappel down the side of Millikan to remove the offending sign. They dangled hooks over the parapet at the top of the building in an attempt to snag the sign and break it loose. When that failed, a genius who is probably now working in the Bush/Rumsfeld Pentagon came up with the idea of torching the sign. Fortunately, the polished rock face of Millikan Library was not seriously damaged, but it was defaced by soot and ash that remained visible for months.

The bastards are still at it, aren't they? 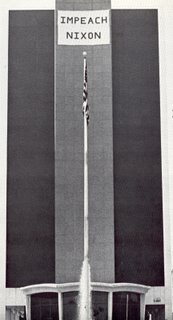 I was trying to find a picture of this on the internet (it was from my stack!) Thanks for having it up.

I was trying to find this on the internet. It's from my stack I was class of '06. Great to see someone saw it :-).