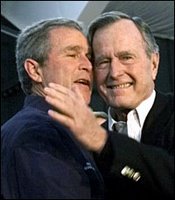 Brit has been there before

Reversion to the mean is a phenomenon unhappily familiar to a host of people whose names bear the appendage “Jr.” Just ask the juniors whose names are Frank Sinatra, Hank Williams, or Franklin Roosevelt. When a remarkable talent appears in a family's line of descent, chances are extremely good that the next generation will suffer by comparison. To quote MathWorld, “ [A]n extreme event is likely to be followed by a less extreme event.”

Some people, however, take an extraordinarily long time to recognize when reversion has struck, even when the evidence keeps shoving itself in your face. Brit Hume of Fox News is one such person. It's happened to him at least twice, and both occasions were painfully obvious to disinterested observers. Brit is very good at keeping the faith.

The first time Brit Hume fell at the feet of an unworthy scion of aristocratic descent was in the 1980s. The pedigree could not have been more elevated, but the results could scarcely have been more disappointing. IBM had provided the personal computing industry with overnight credibility when it deigned to enter the market in 1981 with the IBM Personal Computer. For all of its limitations—some of them significant—Big Blue's desktop computer was immensely successful and quickly invaded business offices and homes across the world. After all, the name of IBM conjured digital magic and everyone took it seriously. The pioneering companies in home computing were swept away, with only Apple hanging on as a distant second.

Everyone assumed that the IBM juggernaut would continue with its follow-up products, and to a degree everyone was right. IBM tweaked the PC by adding a hard disk model (the PC XT in 1983) and a larger model with a more powerful microprocessor (the PC AT in 1984), but the real buzz concerned Big Blue's second generation computer—code-named “Peanut.” We who belonged to computer user groups had access to the latest and most lurid rumors: Peanut would be multitasking. Peanut would have a windowing operating system. Peanut would have dazzling graphical capabilities. Peanut would revolutionize personal computing.

The elephant labored mightily and brought forth ... a mouse. The IBM PCjr was an instant anticlimax. The keyboard was an embarrassment (IBM had to redesign and replace it). The graphics were a slight improvement over those of the original PC (more colors, but the same resolution). There was only one disk drive (and it was a floppy, of course). The slots for ROM cartridges had no software except for a few games (and Lotus 1-2-3, the only serious business program ported to the jr). With additional expenditures for add-ons and secondary market products, a user could bring the PCjr up to the level of a regular PC, by which point its modest price advantage relative to the original PC was more than wiped out.

The IBM PCjr was released with great fanfare in 1984 and quietly killed in 1985. Big Blue burned off its large inventory of unsold PCjrs with deep discounts during the 1984 Christmas season. Brit Hume was one of the many people who went for the bait and found themselves cut off when IBM discontinued the product and its support a few months later. He made the best of a bad deal by sharing his observations and travails in articles published in Monitor, the monthly newsletter of the Capital PC User Group in Washington, D.C. Brit's column carried various titles, but the most common one was Living with jr. His running theme was that the jr wasn't that bad. Really.

George W. Bush isn't precisely a junior, but reversion to the mean has worked with a vengeance in his case. The end result will be that history will upgrade his father to “the good George Bush” to distinguish him from his successor and namesake. Brit Hume was a sucker for a weakling with a good pedigree twenty years ago, and he remains one today. As a regular apologist for Bush administration pratfalls, Brit was the perfect choice for Dick Cheney's lukewarm and muddled apologia for his clumsy shooting of a hunting companion. The only damage Cheney took from his interview on Fox stemmed from his general incoherence rather than Hume's close questioning. (How many of Brit's questions were written for him by White House flacks?)

Not to belabor the point, I would like to share some of Brit's comments from Living with jr in back issues of the Capital PC Monitor. His talent for making excuses in the face of incompetence and disappointment goes back at least that far.

Take heart, PCjr owners. IBM's loss can be your gain. Contrary to what you may have read about the jr, it has turned out to be one of the great values in the history of microcomputing. (December 1985)

And George W. Bush will turn out to be one of the great presidents in the history of the republic.

There are a lot of ways to expand a PCjr, but if you aren't careful, you can end up spending as much as the cost of the computer itself, or more. (January 1986)

“Or more”—the mantra of Bush policy toward tax cuts and defense spending, both of which enrich his political allies.

Few people can enter the basement room that houses my home computer system without gasping at the rat's nest of wires that hangs from the rear of it. This is not what IBM had in mind when it designed the PCjr.... (April 1988)

All computers are festooned with wires and cables, but it's worse when even basic equipment needs to be installed as add-ons. Making the jr into an adequate computer frequently involved the purchase of a second entire chassis to install the expansion boards that would not fit into the original system unit. I suppose the obvious parallel to try to draw with the Bush administration is to suggest that we need a second president to offset the inadequacies of the one we have... But we tried that with Cheney, right? And we all know how that is working out.

Note: The good old days of personal computer user groups are behind us now. Except for rare survivors like the Houston Area League, most of the clubs are gone or reduced to shadows of their former selves. I joined a number of these groups just to get their excellent newsletters. The Monitor was a prime example. My archive of its back issues probably makes me one of the few people on the West Coast who could have written this article. Once again procrastination in cleaning off the shelves has proved its worth!
Posted by Zeno at 1:17 PM