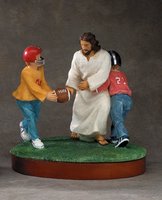 The California high school exit exam has started to exact its toll on students who now face the possibility of ending their senior year without a diploma to show for whatever effort they put in. No doubt this has lead to higher levels of prayer in school, which—despite the propaganda of the Christian right—has never been banned from public education. (Students can pray whenever they like as an act of personal freedom, but it's not your teacher's job to lead you. Simple as that.)

For many years religious conservatives have been a major part of the back-to-basics movement. Those who haven't fled to home-schooling want public schools to drill students relentlessly on the classic three R's. They are all in favor of rigorous standards and strict accountability.

As a math teacher I am accustomed to maintaining pretty strict standards with my students. Nevertheless, I account myself a skeptic of the back-to-basics movement, the push for high-stakes testing, and the resurgence of rote learning. It strikes me as a reactionary campaign to return to a past that never really existed, when “all” students were eager and successful learners—well, at least those who were in school in those days instead of in the fields and factories.

Still, it had not occurred to me until recently to question the sincerity of those who argue the fundamentalist educational cause. But it turns out that some of these rigorists are eager to make excuses or exceptions for their fellow travelers. I am not talking about smarmy little prevaricators like the recently fired NASA public information employee who lied about his college drop-out status while injecting his sectarian point of view into government research on the Big Bang and the age of the universe. No, my epiphany came during EWTN's Open Line broadcast last Tuesday. It turns out that the most miserable dreck passes for divinely inspired art when churned out by one of their own.

On Tuesdays it is Barbara McGuigan's turn to host Open Line. I've mentioned her before. Her shtick is pro-life activism. McGuigan likes to encourage her listeners to lobby against abortion without fear of ineloquence because God “gives us the words to say.” This past week, on February 7, a caller named Theresa shared with Barbara a poem she had written, no doubt under divine inspiration. Brace yourselves, folks. Here is the whole thing:

Did you buy that lie?
It's not just an apple anymore.
We've turned it into a pie
Overflowing and growing with sweet knowing
In which the words are changed and all rearranged.

So do you get this trick on the rhetoric?
Don't buy a pie with a lie.
Get a pie with no lie,
One where all is growing with humble, meek knowing
With grace from above that comes with selfless love.

So never quit when you find you're not fit
And don't fall apart, just open your heart.
Get into the right story that's filled with mercy and glory
For you, for me, for all.

So choose to seek and live the wisdom from above
On the way to the kingdom of love.

McGuigan was delighted with the poem and squealed, “That's beautiful, Theresa! I love it! That's wonderful. Wonderful poem!”

A few possibilities suggest themselves. Perhaps Barbara was merely being polite (I doubt it). Maybe Barbara has a tin ear (quite likely). Possibly Barbara gives high marks to anything—no matter how dreadful—that follows the party line (Bingo!). It was a moment of cognitive dissonance.

I listened to the recording of the poem several times while transcribing it as accurately as I could for your edification. Several times. Please pray for me!

Postscript: I regret to inform you that the figurine of Jesus playing football is part of a series.
Posted by Zeno at 7:43 PM

Vogons are real. How did DNA know?