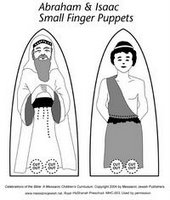 More of that true believer stuff

I probably should stop watching John Hagee during breakfast on Sundays. It's bad for the digestion.

Hagee's inspirational topic today was the willingness of a believing father to murder his son at the instigation of his god. No doubt you recall how Yahweh tested Abraham's faith by ordering him to offer a human sacrifice:

Take now thy son, thine only son Isaac, whom thou lovest, and get thee into the land of Moriah; and offer him there for a burnt offering upon one of the mountains which I will tell thee of. (Gen. 22:2)

I don't. The man is a monster. Or spineless. The only correct response to a command to do evil is "No". Was Abraham planning to tell Isaac's mother, "I was only following orders"? Perhaps in these days of complacent submission to government atrocities overseas we have lost our ability to express outrage, but what other reaction is commensurate with the provocation? Yahweh says, "Kill your son." Abraham says, "Okily dokily." We say, "Stupid religious fanatic."

We're supposed to be appeased because Yahweh doesn't let Abraham follow through, sending an angel to save Isaac's life at the last second and providing a ram to serve as a substitute sacrifice. Happy ending! For me, a real happy ending would have been for Abraham to get in his god's radiant face and say, "Strike me down if you must, but I will not touch one hair on my son's head!" That is a father speaking rather than some god-ridden worm. Then Yahweh would have repented of his command (recall that God is pretty fallible and mercurial in his Old Testament version) and honored Abraham for his familial devotion. Happy ending!

Apologists for Abraham have been working for thousands of years to paper over the ugliness in the Genesis 22 story. While latecomer John Hagee merely belligerently demands we honor Abraham's faith, as do most fundamentalist and evangelical preachers, more thoughtful people have offered creative excuses for Abraham's decision: (1) He knew it was a test and that Yahweh would stop short of Isaac's death. (2) Yahweh is freaking all-powerful and he'll resurrect Isaac from the ashes of the burnt sacrifice and give Abraham a pat on the head for being a good sport. (3) Isaac was a strong young man who submitted meekly when he could have easily overpowered his elderly father and run away; it was really a test of Isaac's faith.

The exegetes who offer the first two excuses base them on interpolations in the text of Genesis 22, not the text itself. Not one line suggests that Abraham anticipated the outcome. Those who direct our attention to Isaac himself at least have the slender evidence of Genesis 22:5, where Abraham commands his retainers to remain behind while he and his son proceed alone. Isaac was not surrounded by his father's loyal men when it came time for him to be bound and laid upon the altar. Furthermore, we are not told that Abraham knocked Isaac on the head with a rock, so presumably there was at least some element of cooperation on the son's part.

All of this scrambling about underscores the difficulty of coming thoughtfully to terms with the stark nature of Genesis 22. I am far from the first person to say quite simply that Abraham failed his test and should have been ashamed of his compliance. I hope I will not be the last. When people say, "But it was a command from God! He had to obey!", I reply that I hope they never think they're hearing from God, because they have no fundamental internal decency. Religionists like to repeat the claim that only God gives us a moral code, but the trickster God of Genesis 22 is a poor source for such a code. The lesson in Genesis 22 is that we should all be good Nazis and follow orders to commit heinous crimes—as long as the orders come from duly constituted authority. So much for conscience.

"All things are possible to them that believe," exhorts Hagee, paraphrasing Mark 9:23. For once he is telling the truth.
Posted by Zeno at 9:59 AM

For many years, no other story in the Bible left me so bewildered as the story of Abraham and Isaac. I could not reconcile God’s telling a father to kill his child with the loving and protecting heavenly Father I knew.

My own understanding of the Abraham and Isaac episode came in stages (see: http://mysite.verizon.net/resowtiq/sacrificial_love.htm). The difficulty for us today is our viewing of that episode through eyes sensitized by some 4,000 years of human development.

Four millennia ago, when human civilization had advanced to the point of possessing written languages to record its history — such as in the Book of Genesis, the living God revealed himself to a human race that was primitive, barbaric, and superstitious. Pagan idolatry and blood sacrifice, including human sacrifice, were the norm. The Israelites even practiced cannibalism of their children (see: 2 Kings 6:28-29).

Human sacrifice of children was so much a part of the culture then (see: Deuteronomy 12:31, 18:10; Judges 11:29-39) that when God asked Abraham to slaughter his own son, Abraham would not have considered it bizarre.

God always relates to us as we are. The test God put to Abraham was whether he would put Yahweh ahead of everyone else that was dear to him. Yahweh, knowing that he would not let Abraham follow through with the killing of his beloved son Isaac, set a severe test that Abraham could relate to.

With different standards and circumstances today, God can put us to the very same test. In the world around us, we can see people who answer a God-given call to work for human rights and peace, knowing they put at risk their own lives and those of their loved ones.

Yeah, though I'm not a Biblical apologist by any means, I had the story explained to me in a similar way. At the time, it was all the rage among deities to demand child (and virgin, and other human) sacrifices. The oddity was neither that Yahweh asked for such a sacrifice, nor that Abraham complied, but that the big guy said "yeah, that child sacrifice thing? Fuhgeddaboudit." Thus, the God of Abraham is shown to be more merciful and less petty than the other popular gods of the time.

How society ever got to a point where denial of the basic biological, psychological, and social drives to protect children and preserve the safety of the next generation was a normal, acceptible thing to do in the name of religion, I'll never understand. The ability of the human race to survive its own stupidity is simply astounding.

Only an All-Loving, All-Condemning, All-Merciful, All-Spiteful contradiction in terms like the bloodthirsty god of the Bible could be so perverted.

Later, in another chapter of the world's most dumbass fairy tale, a virgin gives birth to a son that is his own father and who is his own twin brother, but the brother is a ghost and he made the virgin preggo with magic sperm, and the son tells people "Eat me!". It's a sacrament called Holy Cannibalism, a big improvement over killing children