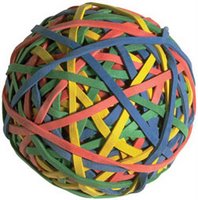 The elasticity of work

Every so often, some brilliant legislator introduces a bill to limit the number of bills he can introduce. Such measures are presented as "good government" bills by legislators who believe that legislating is bad. ("Please stop me before I do my job!") Here are the usual arguments advanced in favor of introduction-limit bills (and my brief refutations):

The bill introduction limit delusion is just one example of a broader problem. While my math students do not seem particularly fond of exercises involving direct variation, it seems that the concept of proportionality is deeply embedded in our perceptions and unthinkingly applied. As a rule, each introduction-limit bill is accompanied by a press release or analysis that presents a simplistic computation:

Each year the legislature spends X dollars while deliberating over N bills. This measure would limit the legislature to n bills annually, where n < N. Legislative spending would therefore be reduced to n/N×X dollars.

This embrace of perfect proportionality misses the point. What is the marginal cost of introducing the (N+1)st bill? Bill No. 1 is always the most expensive, because it requires the entire support structure of aides and analysts and printers to see it through the legislative process. However, for most bills, the marginal cost is very close to zero. Until the workload increases to the point that another legislative aide is hired or another attorney must be added to the legislative counsel bureau (the people who really write the bills—in California, at least), the cost of the bill is absorbed into the existing structure. Today even inelastic incidental items like paper and printer's ink are reduced as bills are increasingly disseminated electronically.

Direct variation does not apply to legislative costs in anything but the most crude and granular way. I might concede that a draconian measure cutting legislative introductions by half might similarly affect the legislative budget, but I harbor doubts even in that case. Instead I can see legislators who normally introduce lots of bills cutting deals and doing favors for colleagues who introduce few, thus making the process even more convoluted and inefficient (and thus more costly) than before.

Sometimes we hear arguments over the cost of national holidays. When the birthday of Martin Luther King, Jr., was made into a national holiday, some states cloaked their racist refusal to observe it by complaining about the financial burden it would impose on their businesses and taxpayers. Businesses would be hurt by the loss of a work day and taxpayers would be cheated of a day's work by public employees. Once again, direct proportion was invoked and exact numbers were computed.

Let me ask you a question. Suppose you leave work two hours early one afternoon for something like a dentist's appointment. Suppose further that you normally work a forty-hour week. While your two hours are presumably covered by sick leave, let's consider your work load. Will you leave 5% of your job undone that week because you took off two of the forty hours? I suspect not. I suspect instead you picked up the pace a bit or tightened your efficiency a little.

Most tasks and occupations contain a certain amount of slack that we recognize when we think about it, but ignore when we turn to mathematics to compute cost impacts. This is natural enough, because direct variation provides straightforward computations and "slack" is the epitome of fuzziness. Almost everything has at least a few percentage points of flexibility to provide the elasticity necessary to absorb modest variations.