How red is my valley

Red in the old-fashioned sense

I frequently refer to my old stomping grounds in Central California as the reddest part of the state. By this I mean, of course, that Californians in the Central Valley love to cast right-wing votes and support conservative causes.

Now, to my great surprise, I have uncovered a red brigade calling for collective action and government interference in free enterprise. It's really quite shocking. The conspirators are naturally rather coy about portraying themselves as advocates of statism and a planned economy, but they cannot help but give it away.

One clue lies in their name. Just as countries in the Soviet bloc used to glory in misleading names—“People's Republic,” “Democratic Republic”—the red threat in the San Joaquin Valley marches under the banner of “Families Protecting the Valley.” Sounds nice and harmless, doesn't it? But check out this excerpt from their manifesto:


Current attacks on the Valley’s water take two forms. One is the view that water is nothing but a commodity and must be sold to the highest bidder. This is a foolhardy concept which, if followed, will condemn the United States to depend upon foreign sources with unreliable health protections for its food supply.

There it is, folks. They oppose capitalism. They want intervention in the free market economy of California.

I agree with them, of course, but then I was long ago accused by a certain family member of being a socialist. We socialists love planned economies, you know.

Or perhaps I just see a role for the public sector in setting policy that might forestall the abuses of unfettered capitalism. Remember the robber barons? (They're back, by the way.) If the highest bidder always wins, we fall instantly into a plutocracy. It appears that the members of Families Protecting the Valley have awakened to this stark reality. Perhaps too late.

If the principles of the free market are applied too rigorously to California's water resources, Central Valley agriculture is doomed. People living in the San Joaquin's burgeoning towns and cities will almost certainly pay lip service to the notion that farming is a crucial industry that deserves their support, but don't expect that lip service to turn into votes for growth limits and municipal water rationing. Farm families are hugely outnumbered by the city and town dwellers, and the latter will balk at anything that reduces the flow of water from their faucets (or forces them to drain their swimming pools). 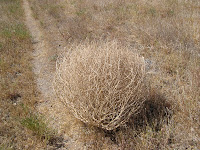 Absent a strong government policy establishing a water allocation program to preserve agriculture in California's arid Central Valley, that agriculture will fall prey to competing demands from the growing urban regions. While many of the townies are in farm-related enterprises, most of the people in Bakersfield, Visalia, Tulare, and Fresno don't think of themselves as farmers. It's not a majority bloc.

Furthermore, the water in the Central Valley is diverted from sources in Northern California. Diversions from the Delta damages those wetlands and blights the fishing industry in the Bay Area. These are legitimate competing interests for California's water (and they had the water first, too). Valley farmers who sneer at fisheries and declare that the fishes should die to preserve farm crops are conveniently forgetting that they're really talking about killing the livelihood of fishermen. The competition is keen and the supplies are short. It's not a pretty picture.

In a more enlightened age, the state legislature promulgated the California Land Conservation Act of 1965. It was an example of singling out agriculture for special treatment because it was deemed a key state interest (and not just a majoritarian concern). The handiwork of Assemblyman John Williamson, the “Williamson Act” provided tax benefits to agricultural landholders who agreed to preserve their farmlands from commercial development for a period of ten years. Recently the state saw fit to strengthen the Williamson Act with an infusion of money to allow it to continue in operation and to fund tax breaks for more ten-year moritoriums on farmland development.

The Williamson Act is a survivor of the time when the state enacted formal policies to maintain the viability of California agriculture. Now it has gotten all but impossible to act in concert this way. The rugged individualists in California farming who regarded subsidized water as their birthright apparently assumed the situation was sustainable. Naturally and understandably wary of government control, they preferred to pretend to stand alone. In many cases, unfortunately, the lack of sufficiently strong policies to protect family farms meant that they were swallowed up by corporate interests. Agricultural land is now concentrated in the hands of a few large agribusiness companies. Individual family farms continue to dwindle in number and those that survive are perched on the edge of commercial nonviability. While farmers carp and complain about federal programs like the Endangered Species Act, they should have been looking for some similar protection for themselves.

It was the partnership of government and family farms that made the valley bloom. State and federal subsidies for huge water projects irrigated the San Joaquin at bargain prices—once. Today California's urban population is larger and thirstier than the state's farms. By the numbers, they win and farms lose. Clearly, Families Protecting the Valley does not want that to happen, but signs demanding that the governor simply “turn the pumps back on” demonstrate a fundamental misunderstanding of reality in a drought-stricken state. A slow-motion tragedy is unfolding before us while the victims rail at the only entity that can preserve them—at least some of them.

Ironically, Families Protecting the Valley had a prominent place at the big Tea Party event at the Tulare International Agri-Center last July, where banners denounced big government and extolled unfettered free markets. Yet no one objected to the presence of these anti-capitalist interventionists.

Can I get you some water for your tea? Sorry. Fresh out.
Posted by Zeno at 8:00 PM

I remember vividly (I was in ag school at the time) the outcry against DES. Because some feed lots occasionally fed it too close to butchering, and lab rats got cancer after eating the equivalent of 5 pounds of liver a day for weeks, DES was banned from the end stages of feeding.

Except that the price of beef went up. Since feeders weren't feeding DES just for the heck of it, but rather because it made steers put on weight faster on less feed.

This "I hate big government but I want my (roads/safe food/fire fighters/Medicare/subsidized water)" stuff is often hypocrisy, but it's probably as often a plain inability to reason.

Ridger, it reminds me of some tea-partiers who declared they wanted government to keep its hands off their Medicare. Yeah, right...

To correctly interpret the disparaging term "big government", one only has to remember that "big" doesn't mean big and "government" doesn't mean government. Most strinkingly, supporters of ever increasing military expenditures seem to believe that the military is somehow not part of the government, and that the resulting colossal budgetary deficits somehow don't count as big.

Went to the San Mateo County Historical Museum (downtown Redwood City) over the weekend. It is a pretty nifty little museum -- I was impressed with several of the displays. They've done a good job with multi-media as well.

The gift shop had several books on the Portuguese in California plus a book on the diaspora from the Azores.

To quote my olive-farming friend, "agriculture is just a huge racket." It is overwhelmingly dominated by rent-seeking, and as such those with the (corporate) resources take advantage of the system win the game. Fortunately for my friend, he understands the system well enough to do fairly well on his own, but I think he's appalled at how much water he wastes because he has no way of converting his water rights into cash to pay for a drip irrigation system. Instead, he's participating in a government program whereby they pay most of the cost of the system. This is a stupid way to do things. So is growing rice and lettuce in a freaking desert. 70% of the water in california is used for agriculture, and about 13% of it is residential. Thus if city residents cut their water use in half, it would save less than a tenth of the immensity of fresh water we send to desert to evaporate while growing food that's worth less than the water itself. They say that the last 20% of solutions tend to require 80% of the effort, but instituting a real price tag on water in agriculture (let's charge at least *half* as much as we charge residents!) is the easy "first 80%" solution we haven't implemented yet.