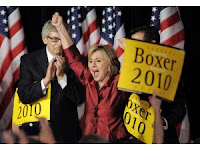 Sen. Barbara Boxer made a low-key campaign swing through northern California at the end of July. She dropped in one Saturday at the home of a former statewide office-holder. It was more of a meet-and-greet than a fundraiser, although a few bucks were collected. (I picked up a Boxer T-shirt and a Boxer bumpersticker to display on my car during my next trip down Highway 99 into reddest California.) Boxer's main purpose was to rally the troops. Several present and former elected officials were present, as were several present and former staff aides. A mix of young up-and-coming volunteers joined the old-timers and rounded out the group.

After some schmoozing and mingling, Sen. Boxer held court in the host's living room. She thanked everyone for their support and tried to assuage our fears about the summer polls that showed her in a virtual tie with Carly Fiorina. Boxer was used to running (and winning) tight races, although it would be more of a challenge in what was shaping up to be a Republican year. She outlined the sharp contrasts between her positions and those of her opponent. It was an effective motivational speech. The adrenaline level in the room went up.

Boxer ran smoothly through her remarks and then entertained questions from the attendees. One of the first queries was not about her campaign.

“Can you tell Jerry to get off his ass and start campaigning? We see nothing but Whitman ads all the time.”

The senator's hands were clasped. She squeezed them tight for a moment and then relaxed a little. It seemed to me that she had heard this question before and was just a little weary of it. 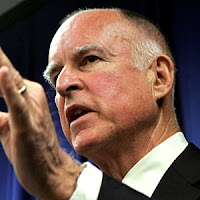 “You need to understand this,” she said. “Jerry knows what he's doing. There is no way he can match Whitman's spending. He's conserving his resources and waiting for his moment. If he tries to match her now, he'll soon have nothing left. He is doing a lot of fundraising, but he's not spending yet.”

Someone in the crowd helped Sen. Boxer look for the silver lining.

“Whitman's ad campaign is so excessive it could be counterproductive. I'm sick of them.”

“Jerry will match her in the homestretch, when it really matters,” she said.

We now know that Boxer was right. Jerry Brown knew what he was doing. Like a guest who overstayed her welcome, Meg Whitman was incessantly in our faces with an unavoidable avalanche of political ads. Even her supporters sometimes marveled at the overkill. When the Brown campaign took to the airwaves, his low-key ads were a welcome relief from Whitman's mindless repetition of talking points. One of Brown's spots mocked Whitman as a word-for-word clone of Arnold Schwarzenegger, juxtaposing the Republican incumbent and the Republican candidate mouthing the exact same slogans and catch phrases.

The once and future governor amply justified Sen. Boxer's faith in the old politician. At the top of the Democratic ticket, Jerry led a complete sweep of California's statewide offices (with the possible exception of the attorney general's office, where the votes are still being counted). California is true blue because its Democratic candidates know what they're doing.

I liked Governor Moonbeam the first time around, and I look forward to the second. My only concern was whether he could really put out the energy at his age -- hell, he's older than I am! -- but at least for now he's shown us the answer.

It's awfully nice to have someone who's really smart holding office. Yeah, I know, the President -- but this one is a seasoned politician who knows what he's doing.

(And some of his policies and politics will tick me off, as they have over the years. Boo Freaking Hoo.)

Was hoping to be the first to post a reply to this post, but am willing to settle for second. Well-played, Porlock :-)