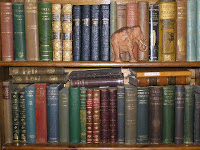 The first samples are free

One assumes that both nature and nurture got in their licks in making me the man I am today, but one nurturer who knew how to punch nature's buttons was my sixth-grade teacher.

I attended an old-fashioned K-8 elementary school before going directly to a four-year high school. No traumatic middle-school experience for me! My elementary school had a rotation system for morning classes for sixth graders through eighth graders. We'd start out in our home room, where the sixth graders learned math from the sixth-grade teacher, the seventh graders learned English from the seventh-grade teacher, and the eighth graders learned science from the eighth-grade teacher. Then we'd rotate, all shifting from one classroom to another while the teachers stayed in place, teaching math, English, and science to their colleagues' students. One more rotation, and we students had all had our daily doses of math, English, and science.

I know what you're thinking. I told you that the sixth-grade teacher taught math, so that's what you're focused on, particularly since you know I grew up to be a math teacher. You think he inspired me to teach math.

I'm not at all sure that he did.

Sure, I was entertained when he mischievously wrote “commutative” on the chalkboard and told us its definition. It wasn't in our math syllabus at all, but he was studying up on New Math, which was soon to be introduced in our school. I remember being interested and intrigued, while I'm sure most of my classmates were thanking God that they would be the last to use the old textbooks rather than the first to use the new ones.

But this is not about New Math.

It's about Mr. Fischer's library. Perhaps he planted a mathematical seed or two while teaching me a subject that I absorbed with ease, but I remember him more for fostering my love of reading. His shelves were laden with an eclectic collection of books. He would read to the entire class right after the lunch hour, settling us down before the afternoon's lessons. (For a few of us, that turned into nap time.) I remember particularly his reading of a science fiction novel about three young men who get stranded on Mars, turning the book into a serial that we worked through over the course of a few weeks.

It was probably a good thing he chose to read that instead of his copy of The Outline of History by H. G. Wells. That title fascinated me, because the hefty tome was obviously not an outline. (The seventh-grade teacher had taught us to outline, but Wells had clearly not learned that lesson.)

To my eyes, however, the real treasure trove was a standalone bookcase placed against the east wall of the classroom. It wasn't a large bookcase, standing only three or four feet tall. Its shelves were filled with histories and biographies, all of them in volumes of matching size and format. I cannot remember which publisher had decided to repackage existing books or commission new ones to create a uniform collection of octavo-sized books, their cloth covers rendered in various muted colors (white, beige, pink, peach, baby blue, and pale green). There were dozens of them. Maybe fifty. Even sixty? (That would be four shelves of fifteen each, which strikes a memory chord. But I'm not sure.)

To my surprise, Mr. Fischer told me I could borrow his books and actually take them home. Once I started, I could not stop. I read about Thomas Jefferson, the French Revolution, Daniel Boone (who did not wear a coonskin cap!), Davy Crockett (who did), Lewis & Clark, Christopher Columbus, the Wright brothers, Simon Bolivar, and Joan of Arc, among many others. 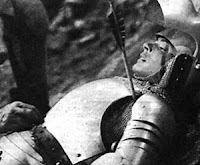 I distinctly remember—in that peculiar way that memory captures random fragments of life—that I learned the word “coddle” while reading Joan of Arc. After being wounded by an arrow in the battle of Les Tourelles, Joan retired from the field and had the projectile removed. Then, “refusing to coddle herself,” she returned to lead the French forces to victory, dispiriting the English troops who had thought she might be dead. I went to look up “coddle” in the dictionary and thereafter had another word in my vocabulary that sixth graders were not expected to use.

Under the impulse of this memory, I recently spent some times in the stacks of a university library, sitting amidst the shelves of the Joan of Arc biographies (DC103 in the Library of Congress cataloging system), riffling through those published before 1960 to see if I could spot the word “coddle” in the chapter on Les Tourelles (just before the capture of Orléans). It was a quixotic effort and it failed. If I had found it, I would have searched for the publication history of that particular biography to see whether I could learn when it got into that set that belonged to Mr. Fischer. And perhaps learn the nature of that set itself.

It's just idle curiosity now, but it would amuse me to see the list of books in that collection. However many there were and whatever their subjects were, I read every one during sixth grade.

I recently (in the last two years) searched for and located on line the elementary reader series I used in one school - long out of print - from the titles of the volumes I used in 2nd grade.

I remember one story straightening out the difference between macaroon and raccoon for me. Not quite a coddle story.

And then I didn't get the books. Don't know why, exactly, I even looked.

Everyone knows that raccoons are tastier than macaroons!

I think that is the Signature Books series, published by Grosset & Dunlap in the mid 50s.

I daresay you are right, Miki! I just looked at an on-line catalog of titles from the Signature Books series and they look very, very familiar. (The cover art, however, does not. The books in my sixth-grade classroom were in unadorned cloth bindings.)

When I was in 10th grade, a long long time ago, in a town that wasn't a village anymore but not yet a city, there was a bookcase in our math room, and we could borrow any book or magazine for up to a week. That's where I discovered Martin Gardner and Raymond Smullyan. There were also books about all kinds of games that nobody had ever heard of: go, tablut, mah jong... Some magazines told us how to write games for a programmable calculator. Others were about wargames and role-playing games.

I'm pretty sure that bookcase had more of an influence on me and my future development than any other thing or person I met before I was 20 years old, except possibly the home computer my father bought around the same time.

Love that story, Anonymous! Thanks for sharing it.

Love the blog, by the way, found you a year or so ago through pharyngula.

Thanks for the suggestion, strokk. Miki, however, has just about convinced me that it has to be the bio included in Grosset & Dunlap's Signature series of books. That means the book I read was The Story of Joan of Arc by Jeanette C. Nolan, but I haven't yet found a copy to check.

I must have been in fifth grade or so when I decided I would read All The Books, or die trying. Yeah, I understood irony even then. Still on the project, though.

In a manner of speaking, Kai, you and I are on the same page.