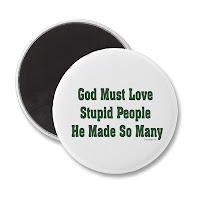 They say that God moves in mysterious ways. Despite this oft-repeated adage, some folks think that they know exactly what God is up to. For one thing, he likes to smite evil-doers. Unfortunately, he often misses and inflicts collateral damage on innocent bystanders.

In a recent development, our grotesquely incompetent God apparently decided it was time to punish San Francisco for its opposition to Proposition 8. It all went horribly wrong, however, when his smiting when awry and he smote San Bruno instead. God's not really very good at discerning where his supposed enemies reside.

One of God's biggest fans waxed eloquent in the September 13, 2010, edition of the San Francisco Chronicle. In his letter, a blithering idiot from Lockport, New York, deigned to explain God's subtle message in immolating a middle-class residential area in San Bruno:

First, I pray for those families who suffered in the San Bruno pipeline blast; this is a tragedy that could've been corrected with the right care being applied beforehand.

However, on a more divine level: This blast can be viewed as God's divine judgment upon San Fransicko (sic) for its ultra-leftist and anti-normal way of doing things, and for that sad excuse of a judge who overturned the will of the people in his anti-Proposition 8 ruling.

God is speaking, folks. Are you listening?

No, the writer from Lockport didn't sign his name with an alias. I charitably picked an accurate pseudonym for him. I choose not to contribute to his fifteen seconds of fame.
Posted by Zeno at 11:00 PM

Off topic, but I'm listening to the song "Halfway There" courtesy of a pop band in my local park, about 3 blocks from where I live. It's the Santa Clara Art and Wine Festival, where the wine seems to outpace the art. Maybe I'm just picky, but the Festival will have to do without me this year. Ah, well.

Did you know the story of Noah ends with god inventing rainbows to remind himself not to destroy his creation with floods ever again? So instead he reigns fire down on... Sodom & Gomorrah I guess? (I don't recall.) I wonder what beautiful natural phenomena he'll invent to remind himself he should blow people up with pipelines!

Which is sounding like something different... how is it that these blithering idiots don't see that they are suggesting their god is a terrorist?

I neglected to mention when I first read this post some time ago that Oolon now is an administrator at The Secular Cafe. :)

I am extremely pleased to learn that.

Unfortunately his new job doesn't allow him much time online, but he appears at intervals. He and I are easing towards emeritus admin status. :)