A course of miracles 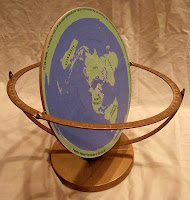 Michael Voris has noticed that his call for the United States to become a Catholic dictatorship has provoked some criticism. He is unmoved by the attacks on his divinely inspired support for a popish theocracy, although he issued a mild “clarification” in his latest video: He admits that he should have said “Catholic monarchy” instead of “benevolent dictatorship.”


Western civilization would be better off if it were a Catholic monarchy.

Surely that will still the voices of his critics, no?

Most of us don't appreciate how perfect life was under Their Most Catholic Majesties Ferdinand and Isabella in Inquisition-era Spain. And we've all but forgotten the idyll that was Mary Tudor's reign as England's beloved “Bloody Mary.”

Mr. Voris, who glories in the academic initials S.T.B. after his name (Sacred Theology Baccalaureate: he graduated from college!), disavows any revolutionary intent.


The point wasn't to publicize a battle plan for overthrowing the secular humanist government.

No, indeed not. Voris just wants us to realize that we are already living under the “Dictatorship of Relativism,” (which he says is a phrase he borrowed from Pope Benny Hex).

That's right: Our benevolent dictatorship of relativism—which provides neither fear, surprise, efficiency, nor nice red uniforms (and certainly not an almost fanatical devotion to the pope)—allows us relative (tee hee) freedom in choosing our personal philosophies and ethical perspectives. We are forced to make up our own minds on a wide range of things.

The boot heel of such tyranny grinds us down!

Michael Voris just knows we would be better off under the “freedom” of a one-size-fits-all Catholic ethos, a sort of papal Snuggy (but I presume all of them would be bright red; it stands to reason).

As someone who is himself quite mild-spoken, I can appreciate how offended Voris was by the language used by some of his critics in the atheist community. (Go to 1:52 in the video.)


It only takes a couple of postings for all of the vile to come spewing forth.

I think he means “bile.” 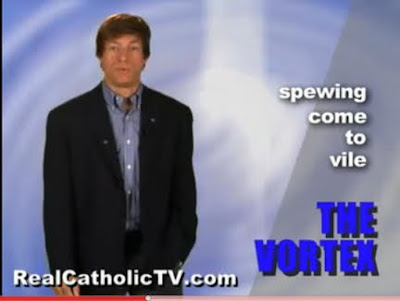 This is from a man who calls us “the vocabulary-challenged atheist set.” Unfortunately, he used this phrase immediately after decrying “course language,” which is the [sic] way he expressed it on screen. 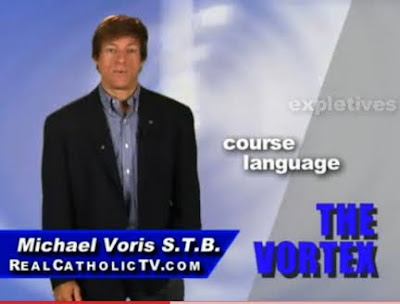 There's something Voris appears to have missed in the invective and criticism directed his way after his crazy endorsement of benevolent dictatorship. It appears to me that his critics are not so much upset as they are ... amused. Voris is cosmically and comically stupid. He would be regarded as a joke even at a teabagger rally. Most of us are ridiculing him rather than lashing out in anger. That's what the pointing and laughing are about, Michael, if you need a clue. You are so out there on the fringe that you're in danger of falling off the edge of the earth.

I mean, you do believe in the edge of the earth, don't you? Of course you do!

He graduated from college with a degree in "theology". In other words, he studied fantasy, and got a degree in it.

Hey, that reminds me, and I must look up the reference and the names involved if I can: There was a philosopher in the 16th century whose bones were dug up and burned, courtesy of Guess Who, because he published a piece of heretical mathematics. Watch out!

I can't recall the Mooslim Hordes doing that, though they did hold up the development of science by mistranslating the fifth book of Euclid. And Tartaglia, who got it right, was a Catholic! So there, you heretic!

That's right: Our benevolent dictatorship of relativism—which provides neither fear, surprise, efficiency, nor nice red uniforms (and certainly not an almost fanatical devotion to the pope)—allows us relative (tee hee) freedom in choosing our personal philosophies and ethical perspectives.

I have the hardest time believing that the creator of the entire cosmos put on a 'meat suit' to masquerade as a human for thirty something years... Just so this deity could undergo some form of blood ritual sacrifice so that the other 2/3 of his triune self could then feel good about forgiving humans for not living up to an impossible standard of perfection. Further, this deity's forgiveness is contingent upon believing in revelations and miracles that only happened in the ancient past. Any god that will only reveal "himself" in the ancient past should not be surprised, nor upset, that large numbers of people don't believe in him today.

The wingnuts thunder that liberals are trying to destroy America, and yet the same people are silent when one of their own states overtly that he'd like to overthrow the very same system.

I don't know why I still rankle at the nonsense and hypocrisy. It's like being angry with the mentally ill.

Sounds like his catalic master (forgot?) to take the bur out from under his saddle but, it sure made for a hilarious ride.

Actually that would be a more rigorous degree program. At least the source text was written by a serious scholar instead of a pack of ignorant Bronze Age priests.

You'd better hope Gandalf isn't one of the professors. He'd be all like "YOU SHALL NOT PASS!"

I'd be embarrassed for you, Anonymous, if I hadn't already used that Gandalf line myself. Yeah, it's irresistible.

hi.
can u post a link to his clarification? i can't find it on the web.

I am baffled as to how to parse "dictatorship of relativism."

Is that something like the tyranny of having no tyrant?

"They don't believe in him now, but they will."

Of course - the inevitable threat. It's all they've got. At least he opens with it.

"People aren't capable of emitting that much hate against other people unless they are filled with self-hate."

If we did have a Catholic monarchy, perhaps the monarch could command someone to give him a better haircut.

"He graduated from college with a degree in 'theology'. In other words, he studied fantasy, and got a degree in it."

Theology != fantasy. (Similarly, internet atheism != intelligent.) Now, it looks like you do a lot of sitting but from your post it is apparent that the sitting does not occur in a library. (I am referring to a public library, of course, not your private library, which, no doubt, consists solely of the fatuous screeds of the "New Atheists" as well as a large collection of comic books.) I suggest visiting a library sometime and asking the person at the desk (called a "librarian") what the difference between theology and fiction is.

it looks like you do a lot of sitting

Now, Robert, that is an unkind thing for you to say to Barry. Quite off the point of any valid argument. I'm sure you must realize that.

And you being such a fine figure of a man yourself.

"And you being such a fine figure of a man yourself."

"It's being angry with the mentally ill."

Fixed that for ya'.