What they don't know won't hurt you

“How is your blood pressure?”

“It's fine, Dad,” I said. That seemed to be a better response than, “None of your business, old man.”

“So what is it?” he persisted.

“Like I said, it's fine. I don't carry my readings around with me.” It was in the 120s over the 80s, which is pretty fine, all right, but I was not in full disclosure mode. I should never have told him when I was diagnosed as hypertensive. Once you give him something like that, he'll never let go.

I looked up. My father was brandishing his home blood-pressure kit, complete with inflatable cuff. He looked eager to spring into action. Instead of recoiling, I schooled myself to keep a neutral expression on my face.

He looked disappointed, but not surprised. I never cooperate with his intrusive fact-finding missions.

It's one of the ways in which he and I are different. He delights in sharing gruesome details, occasionally spoiling meals. (“No, Dad, we don't need to know what they found when they lanced that boil. Please let us slurp our soup in peace.”)

Maybe it's one of those small-town things, where everyone knows everyone else's business. If it is, that's rather funny. Except for my grandparents, who lived next door, the nearest neighbor was a quarter of a mile away. We couldn't lean over our fences and gossip. 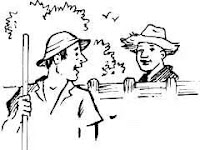 Or maybe we did. Except it was more a matter of leaning out the driver's window of your pickup for a few minutes to chat up an acquaintance who was working the field next to yours. Or shooting the breeze at the local coffee shop where the farmers take turns getting their morning infusions of caffeine.

In a sense, we did all live close together. It was like our yards were all part of the village commons, even though disaggregated and scattered in chunks throughout the county. At any time someone might park a pickup or tractor alongside your house, stroll over to the garden hose, and take a big drink or indulge in a cooling face splash. It would have been an exercise in excessive scrupulosity to knock on the door first to ask if it was okay. Of course it's okay. No question. We do the same at your place.

We also grew up in a drop-in culture. Calling ahead was entirely unnecessary. At completely random intervals, vehicles would pull into your driveway and aunts, uncles, cousins, friends, and acquaintances might come tumbling out. If they knocked on your door and found no one home, it might be because you were pulling into their driveway at the same time. These things happen.

My unexamined acceptance of these practices underwent a complete collapse when I moved out to go to college. When I was still living close enough to home base to make drop-in visits feasible, I discovered how impossible it was to protest that tomorrow's real analysis exam prevented me from dropping everything and going out for a spontaneous but leisurely dinner with my family. Their faces would fall if I insisted that I merely planned to wolf down a sandwich while poring over measure theory. (It was I who was being rude by demanding or expecting prior notification.)

Fortunately, the problem was solved quite naturally once I was living over two hundred miles away. Impulse-driven drop-in visits became impossible and all was well. By then, however, I discovered that the process of individuation had produced someone unlike anyone else in the family.

I had become a private person, perhaps in a kind of weird rebellion from the well-established practices of kith and kin. I began to starve the information mill—or should I call it the “gossip machine”?

Part of it was to avoid arguments, I think. There was no benefit in sending certain bulletins home:

That last instance is one of my more notable examples of keeping my mouth shut. After a dozen years of full-time teaching, I got itchy to return to grad school to earn a doctorate, not having stayed the course in my previous attempt. However, when I was admitted and began to take classes, I never told Mom and Dad. Instead, I'd occasionally comment to my parents about some seminar or another that I had attended at the local university. All very casual. I didn't report that I was formally enrolled.

It was a lesson learned from my bouts of high blood pressure and life under the microscope (or sphygmomanometer). Once my parents (especially Dad) were aware that I was taking another run at an advanced degree, I would be boxed in. Regular progress reports would be demanded (ever so nicely, of course). I'd be committed. Any decision to bow out would be viewed as a crisis or failure rather than a personal judgment that grad school had become too big a distraction or detour from my teaching career. Thus I didn't tell any tales out of school until I had completed the degree requirements and calmly informed Mom and Dad that the university had approved my dissertation and was awarding me a degree.

“We didn't know you were in school!”

“Oh, it was just a part-time thing. The units gradually added up. No big deal.”

My parents were quickly reconciled to the idea that I had puttered my way to an advanced degree. It was a new bragging point to share with their friends, so no harm done.

I imagine, though, that Mom and Dad have learned over the years that their eldest is a close-mouthed fellow who keeps his cards close to his vest. They're probably wondering what new revelation I might suddenly spring on them next. Have I secretly gotten married? (Fat chance.) Have I received some fancy political appointment? (No, they turned me down for the citizens' redistricting commission.) Have I pierced my ears? (Heck, no, although it would be funny. Poor Dad lost sleep when my kid brother did.) Have I endorsed another left-wing cause? (Oh, too many to tell!) 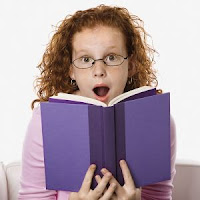 Nope, none of those things will be the next big surprise. The next big surprise is going to appear in book form. Only my sister won't be surprised, because she got to read the first draft. I have told my family's epic history in fictional form in a novel and a publisher is currently scrutinizing it. All the names have been changed to protect both the guilty and the innocent, although my sister has warned me I'm going to get into trouble anyway. I doubt it's going to be a problem. Besides, the characters based on Mom and Dad come out pretty well and are definitely not the bad guys.

Still, maybe I should consider what the surprise will do to Dad's blood pressure.
Posted by Zeno at 7:30 PM

Has it been accepted? If so, congratulations! Let us know what the title is when it comes out!

Thanks, AnyEdge. It's too soon for congratulations, but I have a decent shot. The editor in chief thinks it could be a good fit for their publishing program but is awaiting recommendations from his reviewers. It's a slow process and I probably won't hear a yes/no decision till October.

October sounds FAST to me for a whole book. Hell, I submitted a paper in early April and just got the first round of review back two weeks ago. And that was only 3000 words.

Do they know you write a blog?

AnyEdge: It seems a long time to me, because I'm holding my breath. But you're right: That's a brisk pace for reviewing a manuscript of 120,000 words.

Anonymous: No, they don't know I write a blog. At least, I didn't tell them. But maybe they have a list of blogs that occasionally touch on Portuguese-American topics and already have me pegged.

Congratulations on writing a book. I realize it's too early to congratulate you on publishing a book, but the writing of it matters.

Thanks, Karen. I just put up a post about last year's bizarre writing process. Eventually we'll see if the results are embraced by an eager world.

I certainly hope it gets accepted. If not, there's always Lulu: I would absolutely buy it.

Yes, I do, Sili. Thirty-two years after first enrolling in a graduate program (the one that got me my master's degree), I completed the requirements for a doctorate. Many students call me "Mr. Z" because I don't make a point of noting the Ph.D. in my syllabi and master's degrees still rule the community colleges. (Despite what the misinformed may think, a doctorate is not always an advantage in seeking a position at a community college.)

Great, so now you're telling me I have to hurry as well!

Funny that. Here it'd be very awkward if my students addressed as anything but 'John'. (Of course, I still address them as "You there".)

So what was your thesis area?

Mathematical misconceptions and their persistence (and they are persistent!).

So your blog posts about your students serve as the supplementary data? ;)

Anyhow, count me among the people looking forward to the eventual publication of your book.

As a matter of fact, JBL, my students were (of course) my experimental subjects. For a few semesters I had to include in my syllabus a clear disclaimer than anyone could decline follow-up interviews on their math errors and that those who allowed me to interview them about their math errors could decline to be included in my dissertation. (All included students were cited by aliases and students who declined did not have their grades affected in any way, because grading standards were uniform across the class, independent of research participation.) Fortunately, no one seemed spooked by the process and I ended up with a robust set of interviews about how students thought their way into mistakes.