A member of no organized political party 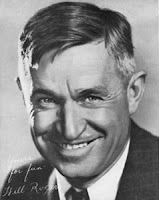 As Will Rogers once said

For a bit of casual fun, you can test your political persona at OkCupid.com. Don't expect to be surprised. Do expect to be slightly irritated at some of the questions. (“People raising children have a responsibility to live up to society's standards”? What if society's standards aren't very “up”?) You're required to come down on one side or the other on every single question. No neutral answers are allowed.

It appears that the test was concocted for the 2008 political season, but it was just today that a friend sent me his results. I am, of course, disappointed that I didn't turn out to be as much of a socialist as he is. Shucks! (Maybe after the Obama administration ships me off to the re-education camps! I'll save a place for Dad!) 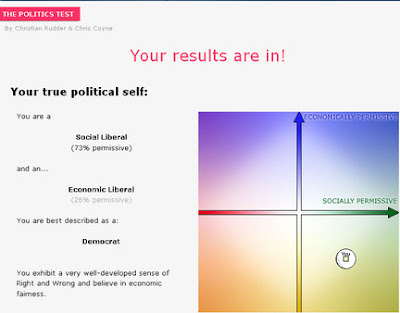 I was halfway (halfway, ha ha) from you to the bottom of the y-axis.

I don't much like a bunch of their questions.

but the coolest part... if you hit the "political ideologies" button at the end, it breaks the plane into regions... we are on just opposite sides of the socialist/democrat line... but no, the interesting part, they define the difference between fascist and republican as one of degree, not kind.

I've done this once upon a time, but it's not like I go around remembering that sorta results (I've already forgotten how many hungry weasels my carcass can feed, but I think I can support a family of two tapeworms).

Amusing that as a youngster I was very liberalistic (European tradition), but as I've grown older I've become increasingly red in defiance of the pithy saying.

Okay, I don't know half of those people, but Obama a Socialist?!

Who's the woman next to him? I seem to be her chin. Mrs. Bush?

okCupid has a fabulous blog where they data mine their users (~170,000 people) and present the results in interesting ways. This last week's entry was on that survey:
http://blog.okcupid.com/index.php/2010/03/30/the-democrats-are-doomed-or-how-a-big-tent-can-be-too-big/

Yay, I come out socialist! Or by Canadian standards, about middle of the road ;-).

I am having trouble imagining a website more useless to you than OkCupid.

I thought the goals of ".. to conserve the environment, establish national health care, and eliminate poverty" were just normal, not Socalist! What do I know, I'm from Canada :)