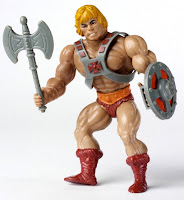 Masters of the universe

My politically benighted father has shared with me yet another classic of the forwarded-wisdom genre. Although I have told him (many more times than once) that one is unlikely to find trenchant political wisdom in poorly formatted, multiply forwarded e-mail screeds, he cannot resist sending me some of the iron pyrite nuggets that drop into his AOL mail box. The latest example is fairly typical of the right-wing spam with which he favors me. It's a tribute to the power of politicians. It's really much greater than you might imagine. No, really!

I'm always conflicted about the proper way to react when these chunks of nonsense show up in my in-box. Initially, I'm insulted that he thinks I could be persuaded by such lame manifestos. Then I'm embarrassed that my father swallows such tripe without blinking. Finally, I simply ash-can the message or—if I just can't resist it—I zing back with a tart response.

This was one of those zinger occasions.

It didn't help that Dad included his endorsement instead of merely forwarding the spam:

“This really got it right. This is what is happening to our country and I do not like it!!!!”

No, Dad. Multiple exclamation points do not add to the weight of the argument. They just don't.

This is part of what followed:

Charlie Reese, a retired reporter for the Orlando Sentinel has hit the nail directly on the head, defining clearly who it is that in the final analysis must assume responsibility for the judgments made that impact each one of us every day. Charley Reese has been a journalist for 49 years. It's a short but good read. Worth the time. Worth remembering!

EVERY CITIZEN NEEDS TO READ THIS AND THINK ABOUT WHAT THIS JOURNALIST HAS SCRIPTED IN THIS MESSAGE. READ IT AND THEN REALLY THINK ABOUT OUR CURRENT POLITICAL DEBACLE..

Politicians are the only people in the world who create problems and then campaign against them...Have you ever wondered, if both the Democrats and the Republicans are against deficits, WHY do we have deficits?

You and I don't propose a federal budget. The president does. You and I don't have the Constitutional authority to vote on appropriations. The House of Representatives does.

You and I don't write the tax code, Congress does.

You and I don't set fiscal policy, Congress does.

You and I don't control monetary policy, the Federal Reserve Bank does.

One hundred senators, 435 congressmen, one president, and nine Supreme Court justices equates to 545 human beings out of the 300 million are directly, legally, morally, and individually responsible for the domestic problems that plague this country.

Those 545 human beings spend much of their energy convincing you that what they did is not their fault. They cooperate in this common con regardless of party.

What separates a politician from a normal human being is an excessive amount of gall. No normal human being would have the gall of a Speaker, who stood up and criticized the President for creating deficits. The president can only propose a budget. He cannot force the Congress to accept it.

The Constitution, which is the supreme law of the land, gives sole responsibility to the House of Representatives for originating and approving appropriations and taxes. Who is the speaker of the House? Nancy Pelosi. She is the leader of the majority party. She and fellow House members, not the president, can approve any budget they want. If the president vetoes it, they can pass it over his veto if they agree to.

It seems inconceivable to me that a nation of 300 million cannot replace 545 people who stand convicted -- by present facts -- of incompetence and irresponsibility. I can't think of a single domestic problem that is not traceable directly to those 545 people.

When you fully grasp the plain truth that 545 people exercise the power of the federal government, then it must follow that what exists is what they want to exist.

There are no insoluble government problems. Do not let these 545 people shift the blame to bureaucrats, whom they hire and whose jobs they can abolish; to lobbyists, whose gifts and advice they can reject; to regulators, to whom they give the power to regulate and from whom they can take this power. Above all, do not let them con you into the belief that there exists disembodied mystical forces like "the economy," "inflation," or "politics" that prevent them from doing what they take an oath to do.

They, and they alone, should be held accountable by the people who are their bosses. Provided the voters have the gumption to manage their own employees. We should vote all of them out of office and clean up their mess!

Charlie Reese is a former columnist of the Orlando Sentinel Newspaper. What you do with this article now that you have read it.

No one should be surprised to learn that the editorial supposedly written by Mr. Reese of the Orlando Sentinel is not quite as advertised. It has been severely “improved” by clumsy hands as it's been passed from one right-winger to another. I omitted the extensive coda in Dad's version that included a long list of taxes, all of which are horrible crimes against humanity. I especially enjoyed the breathless claim that “Not one of these taxes existed 100 years ago, and our nation was the most prosperous in the world.” Why was that amusing?

The list included the Telephone Federal Excise Tax, the Gasoline Tax, and the Recreational Vehicle Tax.

I think I have a clue why none of those terrible taxes existed in 1910. I also doubt that their non-existence was a key factor in the nation's prosperity back then. (It didn't even prevent the panic of 1910-11.)

As I previously admitted, I could not resist sending Dad a slightly snarky response.

The original version was published by Charley (not “Charlie”) Reese in 1995, when the Republicans ran Congress. He pointed out that the GOP only pretends to want balanced budgets, since they never pass any, even when in power. This version was edited with a right-wing slant to blame Democrats alone and also stuck in some nonsense about the supposed absolute power of the 545 senators and representatives to control the universe. To my knowledge, Reese never wrote anything as silly as

Above all, do not let them con you into the belief that there exists disembodied mystical forces like “the economy,” “inflation,” or “politics” that prevent them from doing what they take an oath to do.

Any political reporter who wrote that would apparently believe that Congress could have passed a law abolishing the Depression or mandating peace on earth or banning flash floods and earthquakes. Would that the world were that simple.

The “improved” version of Reese's editorial that you forwarded to me can be rebutted much too easily. Like this, for example:
Above all, do not let anyone con you into thinking that there exists some disembodied political forces like “radical liberals” or “environmental extremists” or “ACORN” or “George Soros” that prevent voters from electing the people they want in office.

And then, of course, these people control the universe.

The state of the world? It's all the fault of the masters of the universe. Yeah. We can blame it all on He-Man.
Posted by Zeno at 7:30 PM

For once, I kind of disagree with you, Zeno. Apart from the insertion of Nancy Pelosi's name, the screed seems non-partisan to me, repeatedly citing the number 545, which would include all the Republicans as well as the Democrats.

If I were rebutting it, I think I'd lead with the fact that... you know... it's still the most prosperous nation in the world, taxes and all.

It's one of those "pox on both houses" arguments that ignores the realities of the political process. Most legislation is a patchwork of compromises because it's seldom possible to maintain a majority with a coherent point of view. Does Congress "want" an unfair tax code? I think that's a silly claim. Just try to construct a definition of what's "fair" first. (And the so-called "fair tax" being pushed by the political right is an exercise in labeling rather than an attempt to achieve equity.) I'd love to see a majority coalition that would clean up the unnecessarily complex tax code, but every line of the code has a constituency behind it and there hangs a tale. Democratic government is messy. Reese criticizes those who refuse to take responsibility for the results (a reasonable criticism) and today's right-wing amplifies Reese's remarks into a brainless attack on all incumbents and all taxes.

And my Dad applauds vigorously.

The real problem is that everyone seems to want to replace 542.5 of those 545 people: every congressperson, senator, and Judge except their representative, senator, Justice who agrees with them, and the President (during their party's turn).