Lying down on the job

Never to thine own self be true

House minority leader John Boehner is forthright in explicating his theory of representative democracy. He speaks without ambiguity:

Shame on each and every one of you who substitutes your will and your desires above those of your fellow countrymen.

Rep. Boehner spoke these words immediately before a majority of the House of Representatives declined to heed his passionate exhortation and enacted landmark health care reform legislation.

The minority leader is on record, therefore, as explicitly repudiating the position of Edmund Burke, the British statesman and member of parliament who was once an icon of conservative political thought. He is perhaps most famous for the aphorism, “All that is necessary for the triumph of evil is for good men to do nothing,” although you will search his writing in vain for those exact words. Nevertheless, we can be confident that Rep. Boehner would have given ardent testimony that his speech in the House was a valiant effort to oppose evil. He is, however, in strenuous opposition to words which really are from Edmund Burke: 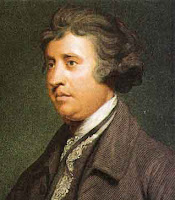 Certainly, gentlemen, it ought to be the happiness and glory of a representative to live in the strictest union, the closest correspondence, and the most unreserved communication with his constituents. Their wishes ought to have great weight with him; their opinion, high respect; their business, unremitted attention. It is his duty to sacrifice his repose, his pleasures, his satisfactions, to theirs; and above all, ever, and in all cases, to prefer their interest to his own. But his unbiassed opinion, his mature judgment, his enlightened conscience, he ought not to sacrifice to you, to any man, or to any set of men living. These he does not derive from your pleasure; no, nor from the law and the constitution. They are a trust from Providence, for the abuse of which he is deeply answerable. Your representative owes you, not his industry only, but his judgment; and he betrays, instead of serving you, if he sacrifices it to your opinion.

Burke spoke these words in 1774 in a speech to the electors of Bristol. It encapsulates his definition of representative government, which is the antithesis of the Boehner formulation that calls for members of congress to be supine servants of the public passion of the moment.

We could, I suppose, concede that Boehner has a right to his own perspective on our representative democracy and to disregard Burke's strong words. I am not willing to be so charitable. I find it difficult to be kind to such scum-sucking bottom-dwellers as Boehner, and I choose my words with care and delicacy.

Boehner is a rank hypocrite and it is impossible to believe that he takes his position innocently or sincerely. He has worked tirelessly as the leader of the House minority to ensure that not one Republican congress member dared to vote in favor of health care reform—not even the 34 men and women who were elected from districts that favored Barack Obama in the 2008 general election. By Boehner's theory of representative government, these people should be falling over themselves to support the president whom their constituents elected.

In the case of Joseph Cao, the Republican congressman from Louisiana's 2nd district (which Obama carried with 75% of the vote), Boehner appears willing to countenance Cao's betrayal of the sacred principal of walking in lockstep with one's constituents. In fact, Rep. Cao sounds positively Burkean in his statement to CNN:

Funny how Boehner holds his tongue in the face of such blasphemy.
Posted by Zeno at 9:30 PM

Don't forget the Right's endless attacks on Clinton for listening to polls.

Nor does the American Right define when we should take stock of the public's opinion. Do we focus on the election results? The polls when we vote? Also, what should a congress critter do if 99% of Americans oppose a bill, but the 1% that support it are in his district? Should he vote against it? Or for it? Whose opinion matters more?