Touched in the head 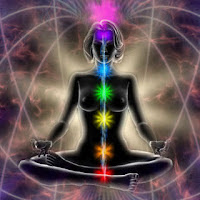 Remember Emily Rosa? Lots of people would probably rather you forget. Emily was only nine years old when she devised an experiment for her local science fair. Twenty-one practitioners of “therapeutic touch” participated in Emily's double-blind study of their ability to detect the energy aura that supposedly emanates from every living human's body. Despite the practitioners' confidence that they could detect and manipulate such supposed human energy fields, the results were no better than random chance. They could not tell the difference between human presence and absence when screened from visual cues.

Emily won a blue ribbon in her science fair and her research study was later published in the Journal of the American Medical Association, making her the youngest person ever to have a JAMA publication to her credit. Thereafter, of course, the practice of therapeutic touch was thoroughly discredited and its practitioners slipped silently away into obscurity.

Are you kidding? Scientific refutation never truly discourages the pseudoscientist.

Therapeutic touch is bigger than ever. The currently preferred term is “healing touch.” It's an extremely popular technique among nurses who can actually get continuing education credit for taking courses in this imaginary therapy technique. The San Francisco Chronicle ran a big story on healing touch on the front page of its B section this morning. Stanford University is taking healing touch therapy seriously enough to embark on a three-year clinical trial of its efficacy. The results will be out in two more years.

Are you psychic enough to predict the results? I suspect that healing touch will prove to be no more effective than a placebo. That, nevertheless, will be enough to produce shouts of triumph from the imaginary medicine community. After all, it could be working. What more do you need?

Here are some excerpts from the Chronicle article:

Anne Broderick believes she can use her hands to alter the energy fields of others to help them heal, taking away fatigue, stress and nausea.

A clinical trial at Stanford University aims to prove it. The university is testing whether an energy therapy called Healing Touch can reduce the debilitating effects of chemotherapy on breast cancer patients.

Healing Touch is a noninvasive energy therapy program founded by a registered nurse in Colorado in 1989. Its following has spread nationwide. Advocates stress that it isn't a cure but a way of easing the stress, fatigue and nausea of radiation and chemotherapy.

It's “energy therapy.” Could someone tell me what form the “energy” takes? Can you measure its strength in joules? (The answers are “No” and “No.”)

Ms. Broderick is a “Healing Touch certified practitioner.” That basically means taking some course work from the people who invented and promote therapeutic touch. You pay your tuition of $300 or so and sign up with the Healing Touch Program: “The Healing Touch Program offers a series of energy-based therapy classes in which students use a variety of hands-on techniques that facilitate energy balance for wholeness within the individual, supporting physical, emotional, mental and spiritual wellbeing.” Simple as that.

Healing touch is offered at several major medical clinics. The provider at Stanford is Healing Partners, the director of which is one of the investigators in the clinical trial.

Healing Partners has paired more than 100 breast cancer patients with Healing Touch providers since the free program began three years ago at Stanford.

That success prompted its director, Kathy Turner, a registered nurse, to prove its effectiveness in a randomized, controlled clinical trial that started last year. As all undergo chemotherapy, one group of breast cancer patients receives Healing Touch for 20 minutes, a second group listens to a relaxation tape, and a third gets nothing. Researchers haven't yet analyzed the initial data.

Turner gave the Chronicle a summary of the notions behind healing touch:

“It's based on the belief that our bodies are surrounded by a field of energy and our bodies themselves are a denser form of energy,” Turner said. “The belief there is that once the body's energy is cleared and balanced, our bodies have the innate capacity to heal themselves.”

The underlying technique is age-old, advocates say, and intends to balance and align people's energy fields so they become “whole in body, mind, emotion and spirit”—although no one knows quite how it works.

Or even what the words mean. Denser form of energy? Balance? Align? Age-old? (Therapeutic touch was invented in 1989 by the late Janet Mentgen,RN.)

Although Anne Broderick presents herself as originally skeptical in an interview with Palo Alto Online (“I thought it was pretty 'woo-woo' stuff”), she now has the faith of a true convert:

Earlier this month, Li arrived at Broderick's Palo Alto office with shoulder pain and a headache. She lay on a massage table, and Broderick covered her fully clothed body with a white sheet. Broderick, 69, then silently told herself, “I set my intention for the highest good,” and began methodically touching Li to the sounds of running water and quiet music, occasionally sweeping her hands above her. At times, she firmly held a foot, knee or wrist. At others, she seemed to play an imaginary piano on Li's back.

Often, Broderick begins sessions by holding a crystal (although she said a “lifesaver on a string” would work just as well) 4 inches above Li and watches it circle over the seven chakras—energy vortices—that run along the length of the body. Clockwise is a good sign. No movement or one that's counterclockwise means the person could use some help getting healthy energy flow, she says.

Chakras? I think we just found the “age-old” part. Healing touch contains a healthy dollop of repackaged Eastern woo. Deepak Chopra would be proud. (Or jealous.)

The Chronicle illustrated its news article with a large photo of Broderick in action, waving her hands over Lydia Li. Thanks to the skills of photographer Kat Wade, Broderick is captured in a nimbus of light. You want an aura? Move around in front of a light source while the practiced eye of a professional photographer captures the perfect moment. It's all in the hands. 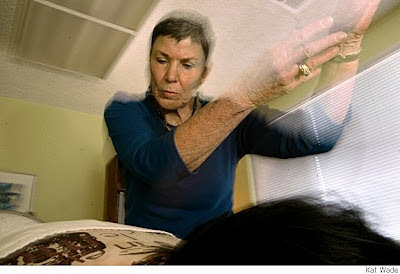 I am psychic enough and I predict that the outcome will be that healing touch is better than placebo!

(because this is not a controlled and blinded trial)

This reminds me: I really need to get my act together and write that review of Alan Sokal's new book Beyond the Hoax, which has a chapter covering the history of pseudoscience in nursing.