Who is Stewart Gilligan Griffin?

It has long been apparent to even the most casual observer that there is something disturbingly odd about the youngest offspring in the family of Peter and Lois Griffin. Despite being a toddler somewhere between the ages of one and two, Stewie Griffin speaks the Queen's English with an effete Rex Harrison accent and a vocabulary that eclipses those of the other family members. Stewie is familiar with such old-fashioned notions as box socials but is out of touch with his contemporaries. For example, he sketches blueprints for time machines, but is at a loss when expected to act like a child (“Blast! What do kids draw these days?”).

The conclusion is inescapable: Stewie Griffin retains many of the traits and faculties of a previous life. Peter and Lois have spawned the reincarnation of a totalitarian autocrat. But who?

The study of past lives is properly the endeavor of trained parapsychologists. I fear that I am but the merest of dilettantes in this field, lacking any professional qualifications. Nevertheless, I will forge fearlessly ahead, striving to adhere to the rigorous standards one would find in any psychic research lab. I will follow where the evidence leads me and I will never ever fudge any of the data (unless, of course, I can't get positive results otherwise; this, too, is a psi lab tradition). 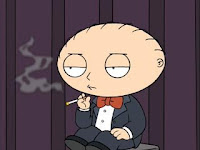 Let us therefore regard the treasure trove of circumstantial evidence before us and home in on Stewie Griffin's previous identity. It was probably male, since totalitarianism has not been a hobby readily accessible to females in the past. (And we can't consider Margaret Thatcher, since she was still inconveniently alive when Stewie was born.) He was almost certainly British, if not specifically English. The obstetrician who delivered Stewie at birth noted the curious presence in the afterbirth of a map of Europe (marked with “bomb here” annotations). That makes one think of Hitler, of course, but it's more likely that Stewie was once a British-born Nazi sympathizer.

The noose tightens. We should search for Stewie among Britain's homegrown version of National Socialism—namely, the British Union of Fascists.

Who among the members of the BUF was a Nazi sympathizer with his own dreams of dictatorship? While virtually all members were Nazi sympathizers (customarily although not officially anti-Semitic), the likeliest individual who fancied himself a future Führer was none other than its founder and leader: Sir Oswald Mosley.

As a member of the British aristocracy, Mosley certainly had the accents of privilege in his spoken voice. Several of Mosley's speeches are available on-line at the OswaldMosley.com website. Sir Oswald started his political career as a Conservative member of parliament, but he was not content as a Tory MP and eventually went into opposition as an independent. He signed up as a member of the Labour Party after the Tories lost their majority and a Labour government was installed. Mosley, however, was never entrusted with the kind of high-level ministerial position he coveted. After half a dozen years as a socialist radical in Labour's ranks, Mosley left the party in frustration and his pendulum swung toward the extreme right. 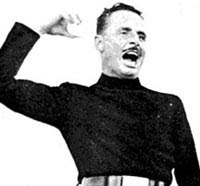 His next move was to found the New Party, which embodied many of the principles of Mussolini's Fascist Party in Italy. Mosley had visited Italy in 1931 and found much he liked in Mussolini's approach to government. When the New Party was unable to win any seats in parliament, Mosley decided to found the British Union of Fascists. The BUF's bully boy enforcers were known as the “Blackshirts” after the paramilitary uniforms Mosely selected for them (in apparent homage to Mussolini's preferred fascist garb).

Mosley favored a corporatist approach to government. Members of the House of Lords would no longer have life peerages; rather, the upper house of parliament would be replaced by a body representative of major industries and the Church of England. You would have, for example, a member of the upper house representing Rolls Royce in lieu of a lord. If a similar practice were followed in the United States, there'd be senators from Exxon and IBM instead of senators from states. (One wonders, rather unkindly, what would have happened to the senators from Enron and Bear Stearns under such a system.)

The BUF was a force in British politics during the 1930s but fell short of accruing any parliamentary representation. The big rally at Earls Court in 1939 was both a high point and the swan song for Mosley's organization. While over 10,000 British fascists turned out to cheer their leader, a year later the BUF was suppressed as a threat to national security in the face of World War II. Mosley and many other fascist leaders sat out the war under internment, which was later reduced in his case to house arrest.

How confident can we be that Sir Oswald has been reborn in Stewie? While the argument is plausible enough, there are problems with the identification. Stewie, of course, is a fetishistic cross-dressing latent homosexual with sadomasochistic tendencies. His relationship with the family dog Brian is intimate to the point of bestiality. These qualities mark him out as an individual of peculiar characteristics.

Do these traits conform to what is known of Sir Oswald's life? There are significant discrepancies. Although Mosley liked to dress up in basic black to address his fascist comrades, that's not quite the same thing as a passion for wigs, dresses, and lipstick. 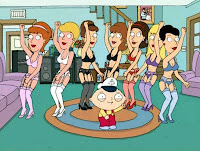 By contrast with Stewie, Mosley was a notorious philanderer who constantly pursued women. He had affairs, for instance, with both the sister and stepmother of his first wife. However, this may not be a disproof of the link between Sir Oswald and Stewie. Fears of latent homosexuality may provoke an exaggerated acting out of the heterosexual role in overcompensation. Then, too, there is the undoubted impact of the genetic heritage of the new incarnation; we cannot expect to find a precise one-to-one correspondence in all respects. We might also note that it is unavoidably premature to discuss Stewie's sexuality, as it is unlikely to be fully formed in one so young. He is ambiguous in his nature and has on a number of occasions seemed inclined to seduce female companions or engage in “sexy parties.” It is, of course, uncertain whether Stewie really understands the implications of such parties.

Rigorous proof of the identification of Stewart Gilligan Griffin with Sir Oswald Mosley is beyond our reach. We have only sifted the possibilities and found a plausible candidate for Stewie's earlier life. Extensive further research must be done before we can be certain, in which case we should be cautiously alert for the first stirrings of a Quahog Union of Fascists. The ominous signs cannot be denied.
Posted by Zeno at 11:00 PM

I say, keep an eye on his neighbors. If there's a family with four or five girls of assorted high weirdity (and wit), and he takes up with one of them, we'll know for sure.

I take a personal interest in this hypothesis because one of my paths of four handshakes to Hitler goes through a couple of Mitfords.

What about the evil genius aspect of Stewie? Did Mosley display any scientific aptitude?

Just to pick a nit: Italian fascists wore blacks shirts, brown shirts were the colour of the German SA. Blue shirts have been worn by both Irish fascists and Spanish falangists.

Interesting.....i had no idea. thanks

lol or maybe he is just a cartoon character

Well, if you've read Wodehouse, you'll have encountered the parody of Moseley and his "blackshirts": the Blackshorts.

In the parody the head fascist, whose name escapes me, sold lingerie for a living.

So it's not too far off.

Roderick Spode is the Wodehouse character. He rates his own Wikipedia entry.

A break down like this is frightening at best. Family guy is horse crap. Oh my God. Where's jesus Christ to put things in perspective?