Sometimes a heel is just a heel

The seduction of the innocent redux

Barry is worried about dangerous squid in the pool, but what Curtis encounters is even scarier!

I'm just a bit too young to remember the fuss created by Fredric Wertham's attack on the hidden messages in comic books. He documented his thesis in a book titled Seduction of the Innocent, which was published in 1954. Wertham, a medical doctor, was sure that the writers and artists of comic books were striving to send subliminal messages about homosexuality (“Excuse me, Mr. Wayne, about your boy Dick Grayson: What exactly is a ‘ward’?”) and sadomasochism (e.g., Wonder Woman).

An echo of the Wertham diatribe arose in the late 1970 when Wilson Bryan Key began publishing a series of books on “subliminal seduction.” He started off in 1973 with Subliminal Seduction: Ad Media's Manipulation of a Not So Innocent America and continued to work that vein with a new book every couple of years. I was working a summer job as a science journalist when Key breezed through town on his publicity tour to promote Media Sexploitation. I remember our senior science writer poring over Key's examples of subliminal advertising with the health writer, laughing as they tried to see the sexy images Key claimed were hidden in a photograph of ice cubes. (“Ice cubes just don't turn me on that much.”) Key published his last book in 1992 and we don't hear much about him these days. Soon after the incident in the newsroom, however, I got a job with the California legislature, just in time for the flap about hidden messages on the vinyl records of rock groups like Led Zeppelin. One Republican legislator tried to get a law passed to make it illegal, but he couldn't get enough people to take him seriously. 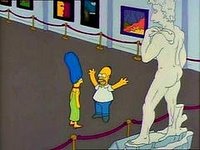 More recently, of course, we've witnessed the stunningly successful campaign—although for only a brief time—by Marge Simpson to censor cartoons like the lovable Itchy & Scratchy. Fortunately, she came to her senses and soon realized that censorship is a cure worse than the original illness. Marge's epiphany came in the form of Michelangelo's “David,” whose scheduled visit to Springfield created an outcry over the supposed obscenity of David's dangling doodle. Saner heads prevailed and, astonishingly enough, the episode ended with everything restored to the exact status quo that had prevailed at its beginning.

As you can see, the panic over subliminal images never really ends. As I was paging through the Sunday newspaper this morning, I was reminded of this when some of the colorful artwork caught my eye. The new installment of Ray Billingsley's Curtis brings us yet another ripe opportunity for the dirty-minded to exploit. While the timid Barry worries about creepy invertebrate sea life, the bold Curtis plunges fearlessly into the swimming pool (how does he keep his hat on?) and encounters the horrors of the deep. Say, what is that scary thing that caught Curtis's terrified gaze? My own opinion is that Curtis is offended by the shockingly bad taste exhibited by the red swimsuit.

Don't forget about all the musings about subliminal messages in films. Remember the salty popcorn and soft drinks in less than what the eye can see but not the brain, which folks claimed could "see" the products. Yes, how does Curtis keep his hat on or in his hand underwater?

Curtis' hat stays on because it is completely pulled snugly over the enormous growth bulging out of his skull.

So what did you think about Sunday's "Luann?" Does Greg Evans have...issues?