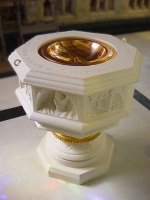 For something, at least

My godson/nephew has a GF. At least, that's how my GS/N expressed it in his e-mail to me. Rather subtle. How did he expect me to parse that? God Father? (Like I didn't already know, right?) Grosse Fugue? (No, he's not that big on Beethoven.) Great Fall? (No, that was Humpty Dumpty.)

Fortunately, my GS/N has a clever GF/U, so I eventually puzzled out that he had finally gotten a girlfriend. The boy is rather a late bloomer in that respect, but grad school can do that to a science student. (And far be it from me, the boy's bachelor uncle, to give him a bad time.)

The GF appears to be the real thing, so she's undergoing the charming initiation rituals favored by our family. My GS/N has taken her to visit his parents a couple of times and she's even met his fearsome grandparents (my folks). She been cross-examined on family background, religion, politics, dietary practices, and number of tattoos. The family is thorough in its intelligence gathering and could put the CIA to shame. (But, hey, who couldn't in these days of Bushworld?)

Eventually my GS/N worked his way down through the family ranks till it was time for his GF to meet the GF/U. He called in a debt—a dinner I've promised him for ages—and the meeting duly came to pass.

I can say that I like the GF, although I did not feel any need to subject her to a special examination. She was, however, curious about me and wanted to know how it was that I had dual status in the life of her boyfriend. How was I both godfather and uncle? In some families that's achieved by intermarriage and inbreeding. In our family we do it with religion. I explained that I was the boy's maternal uncle, since his mother is my sister, and I'm his baptismal godfather because his parents bestowed that honor on me when he was born. It's a Catholic thing.

The GF is not a Catholic. Well, well. I'm sure that was the occasion of at least a bit of consternation in the maternal wing of his family. Still, she was pleasant and curious and wanted to know more about my baptismal duties. Her boyfriend and I explained that infants born in Catholic families are promptly baptized under the sponsorship of adults chosen by their parents to act as godparents. In theory, and sometimes in practice, the godparents see to the religious upbringing of the children if the parents are not able to. They also try not to drop the baby during the actual baptism ceremony. The main job of a godparent, however, is to provide gifts to the godchild at birthdays and holidays.

There is a certain awkwardness that arises, of course, whenever a godparent's religious convictions are at variance with the parents'. I was still nominally Catholic at the time my nephew was born, so that wasn't an issue. (For all I know, the diocese still carries me on the books in their Catholic population headcount. Those inflated numbers have to come from somewhere.) It became more of an issue when my godson came of age for the Catholic sacrament of confirmation, another Church ritual in which godparents figure.

“I'm just his baptismal godfather,” I told the GF. “My brother is his confirmational godfather. By that time, I thought it would be better if he had someone else as his Church sponsor. And the main thing is that he now has two godfathers, which doubles the number of gifts he can expect per year.”

“That's right,” I continued. ”Just when you think religion is good for absolutely nothing in this world, it turns out that you can benefit from it after all!”

The GF paused for a moment, wide-eyed, and said to her BF, “Did I just hear what I thought I heard?”

My GS/N chuckled and replied, “Oh, you definitely heard what you thought you heard. That's my uncle.”

Hey! He forgot to mention “godfather,” as well. But I shouldn't take too much credit for his religious upbringing. He is, in fact, lapsing quite well all on his own.

I still expect a big church wedding, though.
Posted by Zeno at 1:15 PM

I married into a big Catholic family, too. My in-laws are very modern, tolerant Catholics, though. But I know it saddens them that we don't attend church, and especially that our sons aren't baptised.

We couldn't have gotten married in a Catholic church, anyway, since there's all that counseling where they tell you things like, "don't use contraception, and only have sex for procreation." I wouldn't be able to pretend to conform. Oh, and we were living in sin, too. Good times, good times.