He's too super for you, girl

Now that Superman Returns has been in release for a while, I suppose that most interested parties are aware that this new movie is a surprisingly explicit rival to The Da Vinci Code. (Spoiler alert: If you haven't seen it yet, you might want to stop reading right now, because I'm going to mention the movie's surprise twist.) Both movies offer saviors with supernatural powers, fallen women, and divine offspring. While Da Vinci merely mangles the historical record and Christian tradition in pursuit of titillating diversion, Superman Returns trifles scandalously with the health and well-being—life, even—of its lead female character.

The great unanswered question in Superman Returns is how Lois Lane managed to survive her intimate encounter with the Man of Steel without incurring extreme physical trauma. This question is thrown into sharp relief when the incident of the Steinway piano reveals the paternity of Lois's out-of-wedlock child. Although I was momentarily stunned by the shocking spectacle of the reduction of a concert grand into a splintered wreckage (some movie violence really is beyond the pale), I soon realized that circumstances now demanded a serious explanation. None was forthcoming. 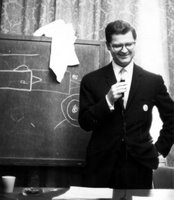 While biologists might tend to fret over the extreme unlikelihood—impossibility, even—of convergent evolution on a distance planet producing a species interfertile with homo sapiens, scientists in other disciplines long ago identified problems that are even more fundamental. Larry Niven is one significant early researcher into the issues of Superman's potential to produce Earth-based progeny. In 1971 he published the treatise Man of Steel, Woman of Kleenex, which appears to be the first scholarly examination of the pertinent issues. Niven minced no words.

Electroencephalograms taken of men and women during sexual intercourse show that orgasm resembles “a kind of pleasurable epileptic attack.” One loses control over one's muscles.

Superman has been known to leave his fingerprints in steel and in hardened concrete, accidentally. What would he do to the woman in his arms during what amounts to an epileptic fit?... Superman would literally crush LL's body in his arms, while simultaneously ripping her open from crotch to sternum, gutting her like a trout....

Lastly, he'd blow off the top of her head.

As Niven points out in an understated footnote, “One can imagine that the Kent home in Smallville was riddled with holes during Superboy's puberty. And why did Lana Lang never notice that?”

These difficulties appear to offer insuperable problems in any attempt by Superman to engage in traditional sexual intercourse with a human being. Niven then examines whether artificial insemination might offer a more feasible alternative if Superman wishes to have offspring:

One sperm arrives before the others. It penetrates the egg, forms a lump on its surface. The cell wall now thickens to prevent other sperm from entering....

There are other problems, as well, such as the question of what happens if Superman's sperm cells share his physical invulnerability. Might they survive indefinitely, using their kryptonian powers to fly about the Earth, seeking fertile eggs wherever they can be found? Since this has apparently not occurred, there must be some as yet unknown inhibitory mechanism that preserves the women of the world from unexplained kryptonian pregnancies. That, at least, is very fortunate. Niven cites the dread possibility that fetuses fathered by Superman might begin to experiment in vivo with the heat vision inherited from their sire. And vivo would undoubtedly be short-lived the moment that superbabies began to kick within the womb.

For everyone's sake, it would be better if Superman never attempts to breed. The message of Superman Returns, however, is that there is a way that it can be successfully done. Since reality is entirely logically consistent, we residents of Superman's universe wait hopefully for the revelation that will explain the advent of our savior's son.
Posted by Zeno at 10:00 AM

Nivens labels under the false premise that strength = virility. Yet many a professional bodybuilder has seen that the trade for a steroid driven physique is raisin-sized testicles. And erections of steel? Psshaw. For all we know Superman has a secret life as a Viagra pitchman.

That should be "Nivens LABORS..."